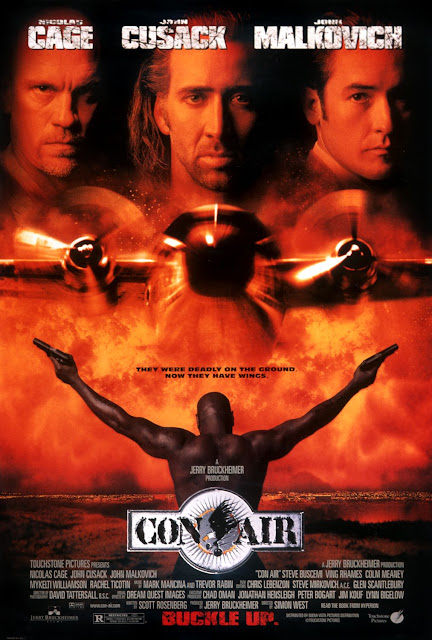 My goodness, it’s 90s action again! Ha ha, I’ve reviewed a lot of these lately, it seems, and this one, Con Air, is a picture I may well have tackled back in my old reviewing days, and if I looked I might be able to find the old notice itself! But I recently watched the picture again, so I can provide opinions that are popping fresh and hot out of the oven! Hee hee!
I’ve said it so often that the words have lost all meaning: here, truly, is quintessential 90s action! But I’ve felt the same about pictures as minor as Passenger 57 or as forgotten as Executive Decision, though if I were applying myself seriously - ha ha! - I might have to give the title to something like Speed, or even to the execrable Bad Boys or The Rock! Con Air, for its part, is more the latter than the former: one of those Bruckheimer crundleburgers that practically bust a nut trying to earn the baffling critical acclamation “Testosterone Fueled Action!”
Well, here is where the movie scores highest: in the simplicity of its plot and in its singular cast! Nicolas Cage pulls out his Sailor Ripley accent, with just a touch of H.I. McDunnough, to play a man just paroled from years in the pokey, hitching a ride on a plane with a load of convicts who are all being taken to a big new jail! But soon the hard cases take over the plane; these include legendarily monstrous criminals played by the likes of John Malkovich, doing the same sort of thing he did in In the Line of Fire, Steve Buscemi from Escape from L.A. playing a calm maniac, Ving Rhames from Mission Impossible III as a Black revolutionary, plus M.C. Gainey from Starman and Django Unchained, Danny Trejo from Machete, and Mykelti Williamson from Streets of Fire as the diabetic buddy! We also get famed instability comedian Dave Chappelle playing a young wiseacre! Ha ha, so you see what I mean about the cast!
The tensions come from Cage trying to keep his identity as a parolee from the other cons, and particularly from Malkovich! Meanwhile, on the ground, John Cusack is trying to figure out how to get what he constantly refers to as his plane back down on the ground without blowing it up, which is what hothead Colm Meaney wishes to do! (To be fair, Meaney has seen this kind of thing before, from when he played a pilot in Die Hard 2!) Up in the plane, where convicts are constantly rooting through Cage’s stuff and discovering his secret, there are violence fights and near-misses, and it all ends with a crash in Las Vegas and then a fire truck fight, and then an over-the-top showcase death for main heavy Malkovich! Ha ha, he catches a real piledriving right upside the head!
Rachel Ticotin from Total Recall plays the only lady on the flight, and as such becomes the focus of Danny Trejo’s horrible rapist character! Of course he gets his just desserts without having a chance to practice his horrible avocation, but, after enjoying a tea party singalong with a little trailer park girl, Buscemi’s maniac is allowed to stroll off for a some action at the roulette table! Ha ha, all of this simply reveals a script that privileges mindless button-pushing over structure or characterization, or other things a motion picture scenario usually aspires to!
All it really has to offer are moments scattered here and there to juice up the audience and make them whoop and say ha ha! We get scenes like the dumping of Chappelle’s battered corpse from the plane down to a city street; the destruction of a classic Corvette by use of a plane, a length of cable, and a hook; and the time Cage rolls under a truck to avoid an explosion, only to find Dabbs Greer already there! Ha ha! And these are all fine, and the movie’s 115 minutes move quickly and entertainingly! It’s clearly aware of its own absurdity, and the cast is just having a ball, but there’s a forced cynicism and faux edginess to the whole thing that really wears thin, and some of the special trick effects are pretty bad too! It’s a movie of its time and doesn’t have the staying power of some of the better 90s actioners, and so I give Con Air one and a half bunnies in the box!