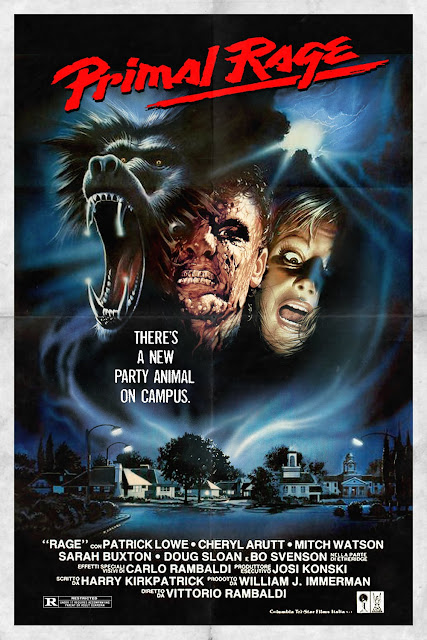 Hi! Burl! Yes, I’m back with another movie review! The picture is called Primal Rage, and it’s another late-80s Italian effort shot in Florida, like Welcome to Spring Break, with which this picture shares a lot of cast and crew! It’s not exactly a good movie, but I feel safe in saying it’s a bit of a treat! Ha ha!
First of all, it’s a campus picture, which I always like! There are many enjoyable campus-based horror pictures, like Night of the Creeps, Final Exam, Black Christmas, Monster on the Campus and Time Walker! (Then again there are stinkers too, like Rush Week and Girls Nite Out!) The subgenre is especially fine when a picture includes lots of little details of academe in the set dressing, like the little hand-written poster we see on a door in this one, advertising an upcoming “Geology Seminar Meeting!”
In the opening scene, the male half of our hero couple - played by a guy called Patrick Lowe, ha ha! - zooms around the campus on his scooter, his sweater sleeves tied loosely around his neck, snapping pictures one-handed with a 35mm camera and what looks like a 200mm lens on it, with a criminally bad pop song tootling in the background! Ha ha! (We hear an awful lot of this song, ha ha! I’ll take the metal soundtrack in Demons any day!)
Anyway, the hero guy is a crusading student newspaper reporter with a buddy, Duffy, who considers himself the Hunter S. of Florida U.! The girl is… well, I don’t know who she is, just a girl, and she has a roommate who seems beaten down by life but boasts about her I.Q.! Bo Svenson from Snowbeast, here sporting among the least flattering hairstyles in human history, the mini ponytail, plays a scientist who puts a rage virus in a baboon! There is also a trio of perhaps the most loathsome frat boys ever seen on the screen, and ha ha, that's really saying something!
If you mix all these elements together, you get a lot of growling and roaring and running sores and just plain running, a bunch of particularly gross gore (some of which seems to have been harshly edited to secure an R rating!), and, filling the last act of the film with the expansiveness of a prematurely inflated dirigible, one of the great Halloween parties on film! Ha ha, they must have really busted the budget on costumes, and I admire that! These gems of masquerade include a guy with a saw through his head, an unsettling bird lady (pictured), pig sailors, a giant nose,  and my favourite, the upside-down guy! Ha ha! 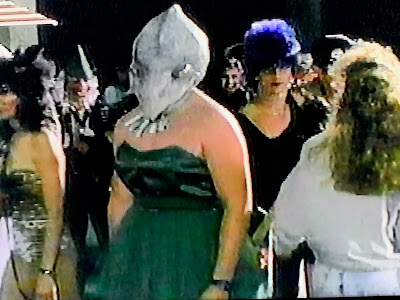 Primal Rage has a lot to counter-intuitively recommend it! Almost in spite of myself, I liked all the actors, even the girl who did the big cartoon wince at one point! And the makeup is pretty good, and, as mentioned, frequently grotesque! Ha ha, its pleasures aren’t for everyone, but some of you will truly enjoy it! I give Primal Rage two and a half human faucets!
Posted by Burl at 01:06