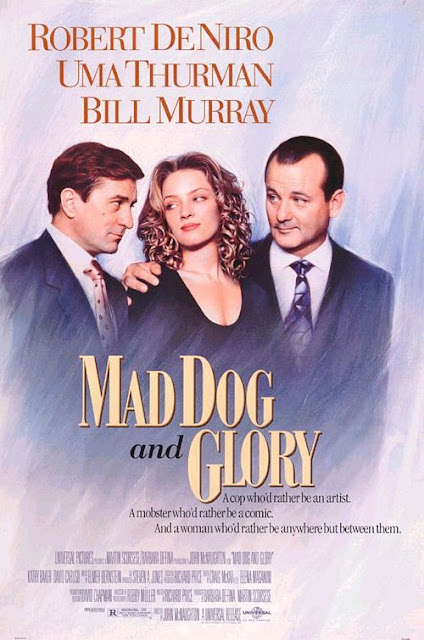 A good day to you all, friends, and I've got another movie review for you! Here´s a picture that was apparently shot in the summer of 1991, then had some reshoots done after fragile test audiences demanded a happier ending, then was released in 1993 to virtually no box office! Well, except me, ha ha, because I certainly went to see it, and I enjoyed it too, even in its compromised, focus-grouped state! The movie is Mad Dog and Glory, and if you’ve completely forgotten about its existence, I don’t think you’re alone!

Strange, though, that a movie with a cast like this, produced by Martin Scorsese, should have so limberly slipped through the cracks! Robert De Niro, well known from Mean Streets and Backdraft, is the star of the show, and he plays a police crime scene photographer named Wayne Dobie, nicknamed “Mad Dog” not just for his last name, but in an ironic fashion for his meek and mild temperament! There’s a mind-drug deal gone wrong at the beginning of the picture that’s so gritty they just had to shoot it in black and white, and this leads to a scene in a convenience store where the trembling Mad Dog manages to sort of save a dapper gangster played by Bill Murray (not doing Meatballs here, ha ha!) from a violent, drug-crazed gunman!

Murray’s Frank Milo is not just a gangster but a comedy club owner too, and not just a comedy club owner but a would-be comedian! He’s not very good, but his boys all laugh uproariously at his jokes anyway! In gratitude for Mad Dog’s actions, Frank sends along an unusual gift: Uma Thurman from The Adventures of Baron Munchausen, playing Glory, a bartender who is also an unwilling prostitute in Frank’s employ, working off a debt her brother owes or some such thing, who will be Mad Dog's chattel for a week! Of course neither Mad Dog nor Glory want any part of this arrangement, but they make the best of it anyway, and soon are enacting awkward domestic love scenes! But the incipient friendship between the two men goes sour, and then it's time for Frank to reclaim Glory!

Both Mad Dog and Frank have tough guys to help them fight their battles! Mad Dog’s partner is a scrappy Irishman bubbling over with brash self-confidence and so in almost every way is the opposite of his mild-mannered buddy! He’s played by David Caruso, bursting with fame from appearances in Without Warning and Blue City! Frank’s muscle, on the other hand, is large Mike Starr of The Money Pit and Funny Farm! Kathy Baker from The Right Stuff meanwhile plays the sad lady across the hall who’s being mistreated by her nasty cue-ball-n’-mustache boyfriend!

It all comes down to fisticuffs in the end, first between Caruso and Starr, and ultimately between Mad Dog and Frank! Ha ha, that final punchfight is what bothered the delicate sensibilities of the test audiences - the hero, they were horrified to see, didn’t win the donnybrook! And why should he; he’s never thrown a punch in his life and is fighting a mean man almost a foot taller than him! But thanks to studio magic, the fight was reshot to give Mad Dog his chance to lay a few knuckles on his criminal opponent and give him a bleeding nose! This leads to a fizz-out of a conclusion and cue… credits! Ha ha, it’s an egregious example of studio fecklessness, and demonstrates more cowardice than Mad Dog on his worst days!

But the movie is for the most part a sprightly and engaging crime-drama-romance-comedy! All the players are good, and Starr in particular overrides the inherent clichés of his “tough guy with unexpected sensitivities” character! All the characters are variations on established clichés, in fact, and each of the actors manage to do something different with them, which itself is an achievement worth applauding! Add to that unfussy photography from the great Robby Muller, who shot Repo Man, don’t forget; solid direction from none other than John McNaughton, who brought us The Borrower after all; and an apposite score from Elmer Bernstein! It’s a small movie and that’s all it wants to be, and I admire that! I give Mad Dog and Glory two and a half Chivas-and-milks!

Email ThisBlogThis!Share to TwitterShare to FacebookShare to Pinterest
Labels: 1990s, comedy, cop, crime, drama, romance, saw it on a date, saw it on the big screen