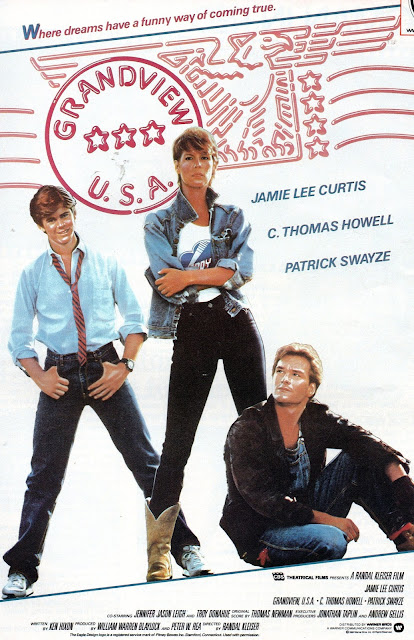 Burl reviewing at you again! Yes, I have a review of a heartland picture for you, one of those movies which make a big deal of being set not in some fancy coastal city full of espresso-swilling elites, but in the cornfed plains of flyover country where the real people live! Where, specifically, is this movie set, you might ask? Ha ha, it’s in Grandview U.S.A., just down the road from Hometown U.S.A. I guess!
The people in Grandview U.S.A. are just normal folks, ha ha! Apple cheeks are always in fashion here! Corn stalks wave in the wind, and in the meanwhile, C. Thomas Howell, straight from Secret Admirer, dreams of swimming in the sea like his idol Jacques Cousteau! Around the corner you might find Jamie Lee Curtis, no longer the donkey girlscout of Halloween, running a smash-up derby she inherited from her late and little-loved father! Why, here comes the best driver in the whole smashdrome, Patrick “Red Dawn” Swayze, who is married to a sweetpotato played by Jennifer Jason Leigh! Lurking around the fringes, as he so often did during this period, is none other than John “Stand By Me” Cusack! Michael Winslow, famed for his vocal sound effects in movies like Lovelines, plays the derby track announcer! And, as a special bonus for lovers of fine character acting, M. Emmet “Blade Runner” Walsh plays the small part of C. Thomas’s girlfriend’s father, who puts a well-deserved punching on C. Thomas early in the picture!
There’s no plot really! C. Thomas develops a crush on Jamie Lee, who still kind of likes Patrick Swayze from way back in the day, but Swayze is having domestic troubles, seeing as how Jennifer Jason has succumbed to the reptilian charms of a deeply tanned Troy “Deadly Prey” Donahue! Ha ha! But Jamie Lee is flattered by C. Thomas’s attentions, and there’s a subplot about how his real estate developer dad is trying to wrest away the smash-up derby from Jamie Lee! But you know what? This movie is set in the heartland where the real people dwell, so it all works out in the end!
It’s a movie that looks nice, thanks to the folksy photography of Reynaldo “Yes, I Also Shot Lucas” Villealobos, ha ha, and it’s functionally directed by Randall Kleiser, the man who brought us a bucketful of Grease, and also of course Flight of the Navigator! But there’s just not much here here, if you know what I mean, ha ha, and things work out so tidily for almost everyone that, as the end credits roll over a heartwarming small-town parade, you wonder just what the heck!
It’s a tiny little minuscule fluttering flap of a movie that’s hard to remember almost as soon as it’s over! It looks nice, the cast is fine, Jamie Lee pulls off her shirt (as was her wont in the years 1983-85) and there are some bizarre rock video dreams which show off the most 1980s fashions and habits you could ever hope to see! It’s a movie with no edges on it, painless and scanty! I’ll give Grandview U.S.A. one and a half sudden changes of heart!
Posted by Burl at 12:15