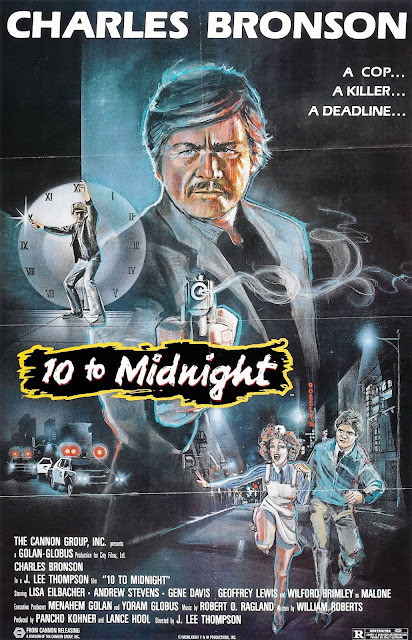 Cease to worry, because Burl’s on the case! Yes, it’s me here with a review of a policier starring that most expressionless of action heroes, Mr. Charles Bronson! We all know the Son of Bron from his appearances in pictures like Death Wish II, but here, in a startling twist, he’s playing neither a vigilante nor a cop! Ha ha, no, in 10 to Midnight he plays a vigilante cop!
Looks like Los Angeles is suffering through a murder spree again! A lady has been found knifed in the park, and Detective Charles Bonson, or Leo Kessler as they call him here, is on the case with his new partner, the earnest Paul McAnn, played by Andrew Stevens fresh from Massacre at Central High! Bronson’s daughter, well-played by Lisa Eilbacher (whom we know from pictures as diverse as This House Possessed and Beverly Hills Cop), stands on the sidelines, hoping to get closer to her old dad, and growing fond of the chainsmoking McAnn!
Now to be sure, this is no mystery movie, no whodunit! The killer is Warren Stacy, who is one of these incel guys we have now, only instead of shooting up the place or running people down, he’s working out his nasty misogyny by putting brutal pokings on the ladies he hates so much and is so roundly, and justifiably, and regularly, rejected by! Gene Davis, an actor I’m not familiar with, does a top-notch job of playing the killer as creepy and hateful and vile and repellent and completely without sympathy, while still somehow seeming like not a very good actor! Ha ha! But Warren Stacey is the murderer all right, stalking and killing his victims in complete dishabille, and Detective Bronson is so convinced of this even in the absence of any proof that he manufactures some bloodstain evidence to ensure a quick conviction! However, he does this so ham-handedly that everyone knows he did it, and when he confesses to the act in court, Warren Stacey is set free again!
From there it’s a quick trip to the nurses’ residence where Bronson’s daughter lives with her roommates, and Warren Stacey gets his kit off and picks up the old poking knife! Killing a dorm full of nurses seems an unnecessary speck of verisimilitude even for this unpleasant movie, but there’s no tawdry road down which this picture will not travel! The ending, in which Bronson’s character throws away any pretense of respect for due process, is thoroughly depressing! And among the movie's greatest offenses: a criminal waste of Wilford Brimley!
Like just about any picture that strives to criticize the justice system from the point of view that criminals are simply afforded too many rights, 10 to Midnight is thick-headed and reactionary! It is so much so, in fact, that one is tempted to take it instead as a clever jab at exactly the kind of movie that it actually is, ha ha! With that immutable face of granite, Bronson seems calm, competent and in control, but his attempt to subvert the justice system is downright moronic, and leads pretty directly to the murder of the nurses!
But I can’t give this picture any credit for subversive cleverness! With its Junior Conservative Club message of “You liberals love criminals so much, but you liberals also say you love women, so how come you want a savage poker of ladies like Warren Stacey to be treated so fairly, huh liberals?” the movie tries for some kind of “Gotcha, snowflakes!” checkmate, but just comes off as idiotic and juvenile, figureheaded as it is by a particularly stupid hero! And the supposedly shocking flippy-floppy nude killer is just goofy, despite the effectively hateful performance from Davis! I mean, imagine if Michael Myers was walking around and you could see his bum all the time? I give 10 to Midnight one wad of gum!
Posted by Burl at 22:06