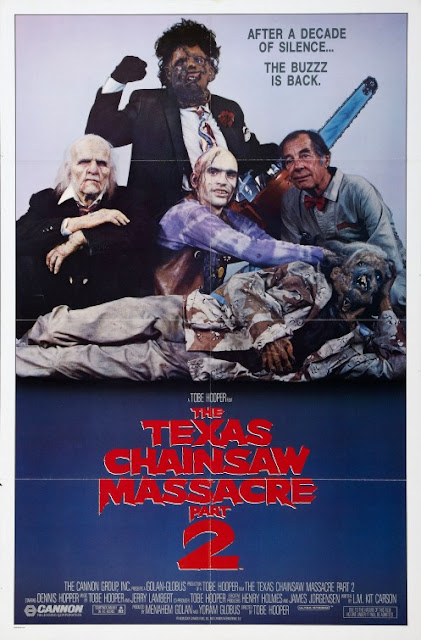 Hi, it’s brrrr-brrrr-Burrrrrrrrrrl here to review a chainsaw picture! Ha ha! Did you like my chainsaw sound effect? Pretty convincing! Anyway, that’s because I’m here to give you a review of a chainsaw picture that isn’t exactly the best of them, but far from the worst either! Ha ha, it’s that odd codfish from ’86, The Texas Chainsaw Massacre part 2!
Now, Dennis Hopper had a long (though not long enough) career in pictures, and he had a few peaks and maybe more than a few valleys, if that combination is geographically possible! But I think it’s fair to say that, between Blue Velvet and his Oscar nomination for his part in the popular hayseed picture Hoosiers, 1986 was among the peakiest of his career peaks! And there, resting comfortably in this Reagan-era aerie, sits his role as Lieutenant ‘Lefty’ Enright, a man on the hunt for the chainsaw killers that, twelve years earlier, had run through his invalid brother Franklin with a Stihl!
Well, he’s about found them, finally! It seems to me it shouldn’t be so hard to track down an entire family of cannibal killers who apparently take care to never leave Texas, which is admittedly a large state, but still! Anyway, the cannibal family’s latest outrage, which is really more of a public service, involves taking down two gun-totin’ bros on their way to the big football game! Their demise, set on the world’s longest truss bridge, is recorded by radio DJ Stretch, a good ol’ gal in unflattering jean shorts; she, powered by the same urge to “do something real” that we find in The Dark’s Cathy Lee Crosby, hooks up with Hopper and tries to team up with him to find the killers!
But events escalate before this can happen, and Stretch’s days of playing The Cramps, Concrete Blonde and Oingo Boingo on some backwoods Texas station are over! (Ha ha, the highly idealized playlist of this station is one of my favourite things about the picture!) Anyway, before all is said and done there will be a good deal of screaming and the sad demise of a great character, LG, played by the marvelous Lou “Last Night at the Alamo” Perryman!
Bill Mosely from The Blob and The First Power, turns in a highly entertaining performance as a plateheaded cannibal brother (“I know what you’re thinking! ‘This is weird, but I can handle it,' right?”), and Bill Johnson from D.O.A. takes on the fairly thankless role of Leatherface! Old Jim Siedow, the only holdover from the original picture, is the cook of the family! All of these actors ham it up very nicely for the movie, and make it better than it otherwise would be for sure! And they live in a seemingly endless rabbit warren of tunnels and bonerooms beneath an abandoned Alamo-themed themepark! Pretty nice!
But is the movie any good? There are differing schools of thought on this, ha ha! Certainly there are some scenes that are staged in a breathtakingly inept manner: the opening truss-bridge slaughter is one such flubup! The script, despite coming from the fellow who wrote Paris, Texas, is full of bananas and bulberries!
However, it’s also full of hilarities and glittertainments! Ha ha, when Hopper invades the family’s lair, screaming “Bring it all down!” and “I am the Lord of the Harvest!,” the cannibals assume he’s from a rival catering business, possibly a vegetarian one! Ha ha! There are plenty of quotable quips all throughout, though few of them make sense out of context! Meanwhile, the picture is full of trick Special Makeup Effects, courtesy of our old pal Tom “The Burning” Savini; these are alternately goofy (the spurting half-head) and impressive (poor old LG)! There are also plateheads, extreme oldman makeups, a big fat grandma corpse and other non-gore trick effects!
Altogether, it’s a weird and unexpectedly fun picture, if not quite a good one! But as you know, weird goes a long mile with ol’ Burl, and I give The Texas Chainsaw Massacre part 2 two and a half little fry houses!
Posted by Burl at 11:16