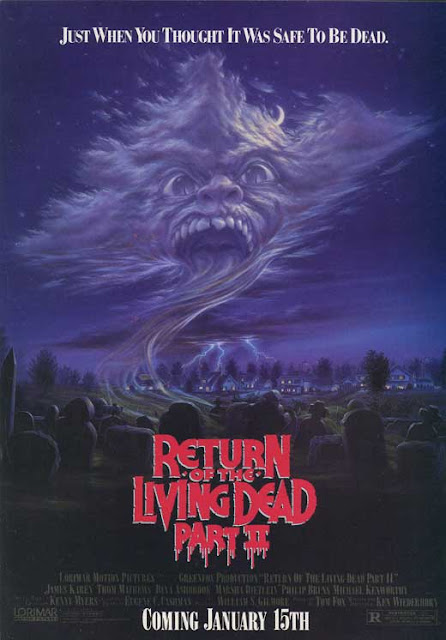 From beyond the other side of the computer screen, it’s Burl, here to review a zombie picture! Here’s another low-budgeter that I saw – snuck in to see, actually – at the theater, back when such things having a theatrical release was more common! The picture is Return of the Living Dead part II, and it’s the sequel to a picture I like very much! Ha ha, you guessed it, Return of the Living Dead! But is the sequel its equal? The short answer is ha, ha ha ha, ha ha no!
But it wasn’t as bad as I remembered, either! Usually I harbor an inordinate fondness for even junky pictures I managed to see in the movie theater while under age (Deadly Friend is another good example), but this one I felt was terrible even then! Moreover, I remembered it as being essentially gore-free: unpardonable in a zombie picture! Watching it now, it has a certain slickness which it wears well (the photography is courtesy of Robert “Inherent Vice” Elswit), and there are more gruesome moments and, yes, for lack of a better word “gore,” than I’d thought!
But, ha ha, it’s still pretty bad! It begins with a group of kids, two bullies and an everykid, who discover an Army barrel containing not just a zombie but the 2-4-5 Trioxin gas which creates them! The everykid, who’s being played by Michael Kenworthy from The Blob, is locked in a mausoleum while the bullies open the barrel and get themselves sprayed in the face by the chemical! Meanwhile two grave robbers, played by James Karen from Time Walker and Thom Matthews from Friday the 13th part 6, are roaming the same graveyard, and they too get a few lungfulls of Trioxin!
Of course those two fellows were in the first picture, and here they are again, mystifyingly playing entirely different characters! Ha ha, of course they couldn’t have played the same characters, since they all got nuked at the end of the first installment! I guess this, rather than any attempt to maintain a standard of quality, was how they chose to bring a sense of continuity to the series! And again, they spend much of the movie dying and dead, and either not realizing that or not accepting it! They do an awful lot of wailing about it too, which gets old very quickly!
Suzanne Snyder from Weird Science is in the picture too, and a few other characters, and everyone is running around a tract home neighbourhood trying to elude the zombies, and later the Army, who, as they always like to do, have quarantined the town! There are some pretty good trick effects thrown in there, and one imagines a constantly stressed and exhausted makeup effects crew; but on the other hand there are lots of dumb gags! Some are, if unoriginal, at least acceptably dumb, like the severed hand giving the finger; others are so dumb as to cause wincing and shaking of the head, like the dancing Michael Jackson zombie!
It’s almost aggressively forgettable, which may be its greatest sin! Too bad, since it comes from the director of the most assuredly unforgettable King Frat! See that one when you get a chance! But know this: you may already have seen Return of the Living Dead part II and just don’t remember! Ha ha! I give it one and a half Army truck driver doobies!
Posted by Burl at 22:18

Email ThisBlogThis!Share to TwitterShare to FacebookShare to Pinterest
Labels: 1980s, comedy, horror, saw it on the big screen, zombie