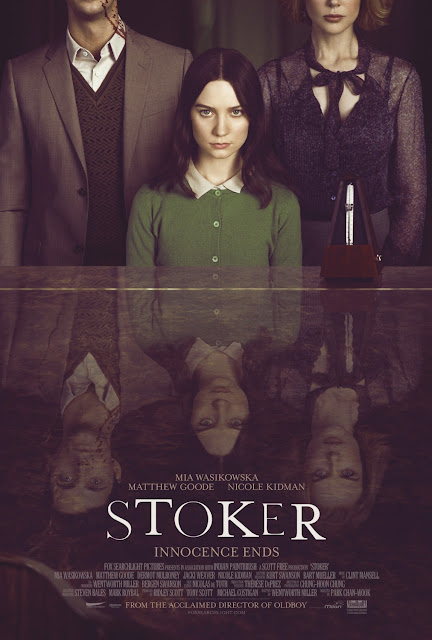 For the love of cinnamon, it’s Burl! Ha ha, I have a new movie to review today, and it comes from the director of that peculiar picture Oldboy! This new one is an American picture though, and it’s called Stoker! It’s a strange and creepy movie, dripping with atmosphere but maybe not totally successful! Still, it’s memorable in its way!
The Stoker family live in a big white house somewhere just outside of town, and they’re made up of a mother, a father and eighteen year-old India! But dad is totaled in a violent motoring accident, and the next thing you know his little brother Charlie shows up! Charlie is pretty menacing, and because they call him Uncle Charlie, I started to think that maybe this was a remake of that fine Hitchcock picture from years ago, Shadow of a Doubt! It turns out that it was inspired by that movie, but isn’t intended as a remake!
Charlie’s menacement is subtle at first, but after a while we realize he is full-on bonkers, and there are flashbacks of various types which explain all this a bit! Old ladies seem to be particular favourites of his, victim-wise, but he’s not all that picky in the end! The Stoker home quickly acquires a hothouse atmosphere, and if there isn’t actually Virginia creeper drooping off the gables, there certainly might as well be!
I won’t go into the particulars of the story much more than this – there aren’t a whole lot of twists and turns, but as other reviewers before me have stated, it’s more of an atmosphere piece that benefits from a lack of specific foreknowledge on the part of its audiences! There are some surprising cast members in the picture too, aside from the central trio! Film person Harmony Korine appears as an art teacher, and there is also a special appearance from Ralph Brown, well-known from his role as Danny in that great picture Withnail & I, as, of all things, a Southern sheriff! Ha ha, I think Ralph Brown might well be the British Elias Koteas – that’s my theory and I’m sticking with it!
The movie also looks very nice, and is highly stylish! The young lady, India Stoker, is very pretty indeed, and Uncle Charlie is a handsome fellow! Altogether it’s an unusual movie of the sort you wouldn’t expect to be made in these days of sequels, remakes, franchises and adaptations! It suggests a lot more than it spells out, which is a very nice change! For that reason alone it’s very welcome, and it pulls off some pretty unique effects!
I was hoping for a little more labyrinthine craziness, I do admit, and there are some loose ends and overwrought sequences which count as non-enhancing flaws! It’s generally a work of quality, however, and I give Stoker three blood-soaked honeybees!
Posted by Burl at 08:05

Email ThisBlogThis!Share to TwitterShare to FacebookShare to Pinterest
Labels: 21st century, drama, mystery, saw it on the big screen, suspense