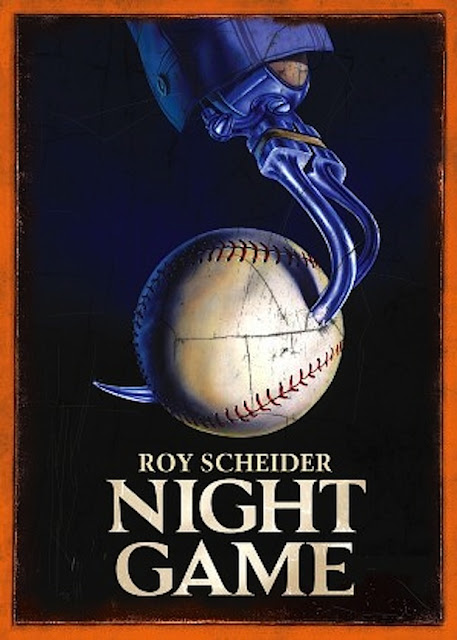 Ha ha, strike 3, it’s Burl, here to review a curious movie that’s about a maniac murderer whose crimes are tied in with the fortunes of the Houston Astros baseball team! Yes, the picture is called Night Game, and it features none other than Roy “Sorcerer” Scheider as the leathery Galveston cop / baseball fan who’s on the trail of the burly, remorseless killer!
The air of oddballness begins with Scheider, who is getting ready to marry a lady half his age (a pixie-cut Karen Young from Heat), whose mother he used to date in high school! So that creates a few conflicts, especially one involving a TV set that doesn’t get Channel 8! Then you’ve got the strange effect these murders have on the community: they seem to encourage rather than prevent the town’s young blonde women – the killer’s established and well-publicized preference of victim – to go out walking at night in desolate areas! Ha ha, one victim in particular is so silly in her every reaction that when she steps on a nail and is subsequently hook-slashed to death, one feels mainly a sense of relief that such a character will be seen no more!
There’s an awful lot of departmental politics on hand, too! Ha ha, there’s the grumpy chief who perpetually has a headache; he’s played by Richard Bradford from The Mean Season, a picture this one somewhat resembles! Then there’s a mean jerk played by a master of the form, Paul “Die Hard” Gleason; his filmography being what it is, he wouldn’t have to do a thing to persuade you of his obnoxiousness, but instead he seems to give double the effort! Ha ha, you want to see him catch a punching, and he does!
Frankly the picture sports too many subplots and, as a result, many more characters than any ninety-five minute thriller should have! The killer, who turns out to be a hook-handed ex-ballplayer driven mad by his own misfortune – though why he acts out his madness in just this way is left a mystery – is a bulky sad-sack played by Rex Linn from Drop Zone, and is unmemorable enough that even the other characters seem to forget about him for great stretches of the picture!
But ha ha, I hear you say, what about the suspense scenes? Given that the picture’s producer, George Litto, worked several times with Brian De Palma, producing some of that director’s finest thrillers (Obsession, Dressed to Kill, Blow Out), you might expect some special care was taken there! But nope, they’re pretty rote: flat and none too seat-clutching! The killer’s murder weapon, his hook-hand, is pointlessly held back as a late-picture surprise (despite being explicitly part of the Rolling Thunder-style promotional artwork), so we are even largely deprived of the eccentricity this might have offered!
The interesting locale, Galveston, is underused, but not completely wasted! We get some nice looks at the Gulf beaches and piers, and of course there are many aerial shots of the not-far-away Astrodome! Ha ha! The baseball stuff seems a little arbitrary, despite the lead character’s obsession with the sport, and Pino Donaggio’s saxophone-heavy score must rate as one of his worst! Altogether, along with such pictures as The First Deadly Sin and The Banker, Night Game is a fairly desultory attempt at a psycho-thriller featuring an unusual weapon, and I give it one and a half microwave ovens bigger than a large TV set! Ha ha!
Posted by Burl at 13:34