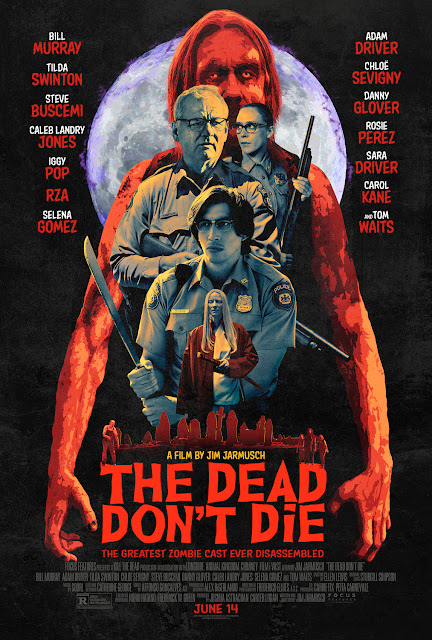 Everyone dial Z for zombie and join me, Burl, in a little chat about Jim Jarmusch’s latest picture, The Dead Don’t Die! Yes, that’s right, Jim Jarmusch made a zombie movie, ha ha, but in a way you might say that, with their slow paces and barbiturated acting, all his movies have been zombie movies! By the end of this picture, I was convinced that it was a vehicle for Jarmusch to make this very same comment about his work!
Somehow it still seems a novelty for Jarmusch to be making such an unadulterated genre picture, but he’s been doing it for quite a while now! Westerns with Dead Man, samurai movies with Ghost Dog, vampire pictures with Only Lovers Left Alive - ha ha, many’s the time Jarmusch has taken an established form and bent it into his own shape! But the Jarmusch pictures I like best, Down By Law and Mystery Train, are their own thing, and maybe that explains why I wasn’t so much taken with The Dead Don’t Die!
He’s never made a movie quite so arch as this one, and I’m afraid that’s not meant as a compliment! The story - well, not story, but more a sort of portrait - is of a small town overwhelmed by zombies which are presumably part of a worldwide plague unleashed by the earth having been shaken off its axis by polar fracking! Bill Murray, who is well-known from Meatballs, and previously dealt with the undead in Ghostbusters and Zombieland, is the low-key town cop, and his deputies include Adam Driver from Frances Ha and Inside Llewyn Davis, and Chloë Sevigny from Gummo! They drive around the town as things get stranger and the zombies more plentiful, and Sevigny is the only one who reacts at all realistically, and she therefore seems quite out of place in this town and more especially on this police force!
As all this happens, the picture’s theme song, a country tune from Sturgill Simpson, plays as relentlessly as “You Put A Spell On Me” did in Stranger than Paradise! Simpson himself is discussed so much that I thought he was going to somehow turn out to be responsible for the whole disaster! Meanwhile my pal Tom Waits, well known from Wolfen, lurks in the woods; otherworldly town coroner Tilda Swinton, from The Grand Budapest Hotel, gives zombie heads the chop with her katana; and Danny Glover plays the poor soul who finds a couple of ladies who’ve been gruesomely eaten to death by Iggy Pop and Sara Driver! Meanwhile Steve Buscemi plays a racist, boneheaded redneck, and for his sins catches quite a biting!
Something about the picture seemed comfortably familiar as it went on in its rambling, shambling, small-town way, with its homely non-characters and chonky mise-en-scene; and finally it hit me: I was watching nothing more or less than a big-budget Bill Rebane picture, or an unusually star-studded Don Dohler joint! It was Invasion From Inner Earth or Fiend writ large and played by pros, ha ha! And once I made this observation, I began enjoying the picture a lot more!
It’s true that the movie works a little too hard at irony and not at all at horror, and that Jarmusch appears to have no interest in scaring people and no discernable ability to either! There’s some bloody stuff though, and the director seems to have had fun with some of the gore gags, which is nice; but the head-choppings, with their spumes of dust released from the zombie bodies, get a mite repetitive! On the other hand, RZA from Due Date shows up at a comic shop to drop a bit of wisdom, something like “The world is perfect, pay attention to the details!” At that moment I noticed some of the background set dressing included a small poster for that greatest of pictures, The Thing! And I realized that RZA was correct, and that this was the best way to approach the movie itself! That revelation, too, led to greater enjoyment!
And all this leads me to my final point, one I hinted at in the first paragraph: while it’s obvious that Jarmusch made this picture more because he could than because he wanted to, and true too that his satire is mostly broad and shopworn, sold in bulk at the Monroeville Mall some forty years ago, and that his fourth wall-breaking is lame, he didn’t waste the opportunity for a little sharp self-criticism! I mean, after all, though almost everyone else turns, we never get to see Murray or Driver in zombiefied form, and this I believe is because Jarmusch was worried we might think we’d accidentally started watching Broken Flowers or Paterson instead of The Dead Don’t Die! Jarmusch is no dummy; he knows the score! Ha ha! So while this is very much Jarmusch Lite, a half-baked comic book adaptation of his usual fare, I’m still going to give it two and a half Cleveland hipsters, which is how many there are by the end of the picture! Ha ha!
Posted by Burl at 21:23