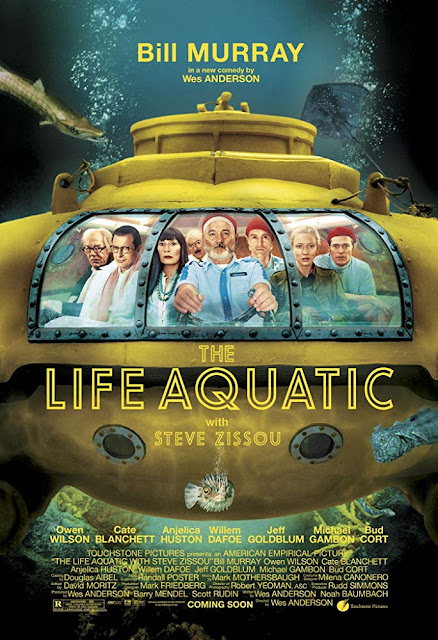 Ahoy-hoy, it’s Burl, here to review a picture that underwhelmed me a bit when I saw it in the cinema, but which has doggedly, or dogfishedly, risen in my estimation ever since! That picture is The Life Aquatic with Steve Zissou, and to say that this is one of the most artificial movies Wes Anderson has yet made is to accuse it of no little artifice!
As I watched this recently with my son, he asked me what the movie was about, and ha ha, for him I had no answer! We simply follow Steve Zissou, a self-hating American version of Jacques Cousteau, as he and his international band of misfits search, and film their search, for the enormous jaguar shark that chewed up his friend Esteban! There are many complications, including the appearance of a young man who may or may not be Steve’s son; a bond company stooge along to keep the budget in check; pirates; a pregnant journalist; a crabby wife; and a rival superstar ocean scientist!
But that’s just the plot stuff! Ha ha, the real joys are conceptual or visual or detail-based! All the made-up sea creatures and phenomena, and the crayon-coloured animations of same, are simple delights! The idea of Steve Zissou and his ship, the Belafonte (which is shown to us in great detail thanks to an amazing set), and the extracts from his films, and movie posters for older pictures like The Battling Eels of Antibes and Shadow Creatures of the Lurisia Archipelago, enchant us still deeper into this aqua-centric world!
And the cast is large and spectacular! Bill Murray makes a good Zissou, and Owen Wilson seems to be channeling Val Kilmer’s performance in Tombstone, but with less cynicism and coughing! There’s Willem "Streets of Fire" Dafoe, hamming it up as a needy German; Jeff "Into the Night" Goldbum doing it up right as the part-gay rival; Anjelica Huston underplaying to a fault as the wife; Michael Gambon smooth as paste playing the type of producer most of us in the movie business have met; But Cort as the bond company stooge; and Cate Blanchett all nervy as the reporter! There’s a sweet cameo from Seymour "Eye of the Tiger" Cassel in the role of Esteban, which makes you wish there were more of him in the movie, maybe in flashback form!
Of course none of the characters seem quite real, which makes it hard to connect with the personal drama in the story! Anderson’s patented attempts at pathos through slow timing and understated delivery might do the job in the moment, but they don’t manage much depth, or hit home on an emotional level, except occasionally! “I hated fathers and never wanted to be one,” says Steve at one point, and one can sort of understand that sentiment even if one doesn’t share it!
The picture may not plough deep, but it ploughs smoothly and provides many joys along the way! It tries a little too hard to put an emotional punching on us, but that’s something Anderson has gotten better and subtler at as he goes along, so it didn’t bother me much here! Ha ha, I guess I applied some kind of latent maturity filter to my viewing! Anyway, it’s a fun picture and a very funny one too, and piled high with good music, fulsome performances, and an end credits sequence charmingly borrowed from The Adventures of Buckaroo Banzai! Ha ha! I give The Life Aquatic with Steve Zissou three rubber tides!
Posted by Burl at 23:50