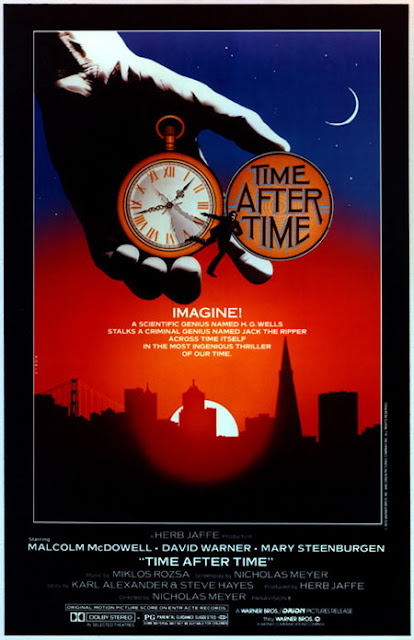 Whizzing crazily through time, it’s Burl, here with a time travel suspense-romance that brings us from the gaslit streets of Victorian London to the hills and bridges and concrete canyons of modern-day, or at least 1979, San Francisco! Ha ha, yes, it’s Time After Time -  ha ha, no, not the Cyndi Lauper song, but the movie we all know and love from Mr. Nicholas Meyer!

The story begins in Victorian times, with Mr. H. G. Wells, as essayed by Malcolm McDowell from Get Crazy, inviting his friends over to hear about his invention of a time machine! Ha ha, his buddies don’t believe him, all except Dr. John Leslie Stevens, who turns out to be better known as Jack the Ripper and is played by Morgan himself, David Warner from Nightwing and The Omen; and when the bobbies come a-knocking, he flees the scene in the time machine, doodle-doodle-doo! Luckily the machine has an automatic come-back system, so Wells follows tout suite, and finds out that his new address is San Francisco circa ‘79! Ha ha!

Why San Francisco and not London, you may ask? It has something to do with a Welles exhibit being put on in the City By the Bay! In any case I don’t think we’re meant to think much about it: the focus is on Wells’s dislocation and his steep learning curve as he tries to get used to swingin’ 70s California life! After all, the first person he meets in the new century is a very young Corey Feldman, the lad from Friday the 13th: The Final Chapter! Wells cleverly tracks the Ripper down by going to banks, and in doing so attracts the attentions of currency exchange officer Amy, played by Mary Steenburgen from A Midsummer Night’s Sex Comedy!

The movie bounces around from light fish-out-of-water comedy to tender romance to ripper murders in which mutilated prostitutes are hung up on lampposts! Charles Cioffi from Klute and Remo Williams appears as a police who’s trying to figure out why ripper murders are happening in Frisky, and meanwhile, at the same time Amy finally realizes who her gentlemanly new boyfriend actually is, and that he is in fact a time traveler, Amy’s pal from the bank is dismembered in an encounter with the murderous Stevens!

With its Miklos Rosza score, the film feels lushly appointed, even if it doesn’t always look that way! Ha ha, Meyer’s filmmaking skills are fairly basic, it must be said, and San Francisco has looked better in nearly every film set there that I can think of! (The Guy Maddin/Johnson Brothers pastiche film The Green Fog offers instructive and immediate confirmation on this - ha ha, even Herbie Rides Again has more Frisco atmosphere!) The premise is clever and engaging, and the actors are charming, but the movie also offers a distinct feeling of not fully rising to its potential! It’s nevertheless a fun divertissement, and something many are fond of!

I remember seeing it on TV as a youth, and I liked it then well enough, so I understand the residual fondness! But as pleasant as it is, ripper murders notwithstanding, its highs do not rise all that terribly high! It’s competent Hollywood entertainment, full stop, and so I give Time After Time two and a half pomme frites!