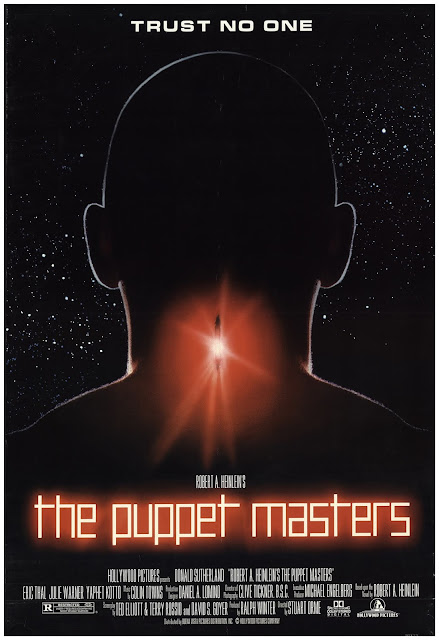 Ha… ha… it… is… me… Burl. Do not be alarmed. I am still… hu-man. I have not been… replaced by a… superior alien consciousness. I am still your same jolly old friend… Burl. Ha… ha.
Ha ha! No, I’m just kidding around! I’m as Burl as I’ve ever been, and I’m here to review a movie about insidious alien takeover, The Puppet Masters! No, it’s not a movie about pod people: the takeover method on display here involves not pods, but slimy alien starfish that can shoot out whips and pull themselves around the room, to slap in your face as they fly by if you’re not careful, or, worse still, to attach themselves to your back, dig in like a giant tick, and bond with your nervous system to achieve complete full-body puppetism!
Right off the bat I have to give this picture some props! The takeover begins right away, and the authorities display a level of good sense and speed of action that forestalls the usual frustrations viewers might feel on waiting for the movie characters to catch up to where we, the audience, have been since seeing the title flash on the screen!
Our main characters are members of some kind of elite CIA-adjacent science force, and the boss of them is a characteristically crusty Donald “Billion Dollar Brain” Sutherland, resplendent in a silver cocksman's beard! Sutherland gets to throw a little action, bopping possessees with his silver-tipped walking stick and pulling a gun on his own son when he suspects the lad to have been taken over!
Sutherland’s son, an agent in this action-science agency, who of course doesn’t get along so well with his dad, is actually the picture’s hero, alongside a lady who serves as a scientist, action partner, and love interest! I recognized neither of the actors and have never seen them since, but they acquit themselves tolerably well!
The picture has a welcomingly familiar supporting cast though! You’ve got stalwarts like Keith David from Road House, Will Patton from Road House 2, and Yaphet Kotto from Truck Turner, whose talents the filmmakers manage to mostly waste! And the Vagrant himself, Marshall “Stand By Me” Bell, is in it too, as an army general who catches a little backdoor parasite action! Ha ha, he ought to be used to sporting rubbery hangers-on - he hosted Mr. Kuato in Total Recall!
But everyone gets a chance to be possessed: all three of our leads take an unwilling turn, and things get a little repetitive! The picture starts spinning its wheels about halfway through, and eventually there are a couple of climaxes and a happier ending than we find in Sutherland’s other body snatcher picture! For many years I had the impression that this was even more bloodless and MOR than it actually is, and in the second half it almost lives down to that assumption!
But I will say this: the creatures are neat! I always like it when the trick effects gang take the time to put together an alien with some biological plausibility - these guys reminded me a bit of the face huggers from Alien, because as with those crustaceous delights in the Ridley Scott picture, The Puppet Masters gives us a dissection scene featuring some realistic-looking organs and glop! Ha ha, so kudos to you, Greg Cannom and Larry Odien! But the movie is more middling than its monsters, so I give it an even two naked shower meltdowns!
Posted by Burl at 23:50