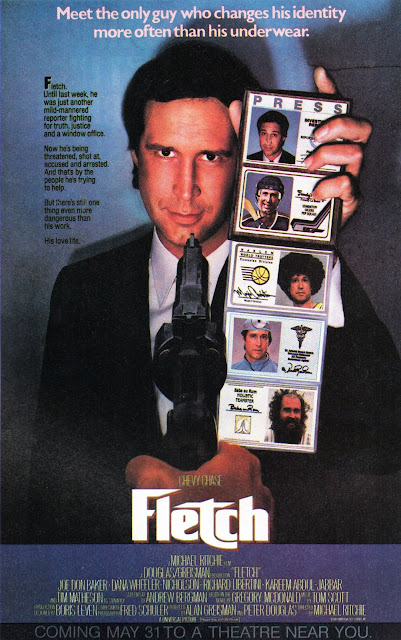 Hi, Burl here with a review of a comedy picture from the mid-80s! Of course I’m talking about Fletch, the movie that was one of Chevy Chase’s biggest hits that didn’t have the words “Vacation” or “Caddyshack” in the title! It’s a little better than most of Chevy’s movies, because it had a real director (Michael Ritchie) and a script that was based on an actual book!

Chevy plays Irwin “Fletch” Fletcher, the sort of investigative reporter who never seems to do any actual writing, or much interviewing, or any of the things you might reasonably expect a reporter to do! Mainly he dresses up in different costumes and pretends to be a wide variety of people, such as a goofy salesman, a goofy actuary or a goofy airplane mechanic! At one point, for no particular reason, he makes himself up to look exactly like his editor, Richard Libertini, dons a kaftan and goes roller skating on the beach!

A quick aside: the beach Fletch spends so much time at (he’s supposedly doing a story on how mind drugs are sold at the beach, which strikes me as requiring about the same investigative prowess as would one about water tending to make you wet) looks just like the beach they used in that great movie Blood Beach! Ha ha, I think I’ll review that one soon!

Anyway, Fletch gets hired by a millionaire to, supposedly, shoot him dead as a service so the millionaire can avoid a slow death by bone cancer and not have to commit suicide! This story seems fishy on its face, and Fletch picks up on that nearly as quickly as we the viewers do! And wouldn’t you know it, the Case of the Millionaire who Wants to Die and the beach drug story are tied in together in some obscure way!

There are plenty of little comic detours and lots of familiar faces in the cast list to get through before the case can be solved, however! You get M. Emmet Walsh as a doctor, Geena Davis as a newsroom assistant, Joe Don Baker as a horrible cop and Norm himself as a portly guy on the beach! Ha ha, lots of fine performers there!

There are amusing moments throughout, and maybe my favorite is the weird gargling noise Fletch makes when he sees M. Emmet Walsh through a window! But a string of amusing moments do not a compelling mystery make, and it must be admitted that Fletch is not exactly Murder My Sweet! I imagine the book must give a bit more weight to the complexities of the plot and a bit less to nutty costumes and comedy gargling! (I think I might have read the book, but to tell you the truth I can’t really remember!)

So in the end I give Fletch only two and a half novelty teeth, with the extra half for that great gargle alone! As mystery movies set in L.A. go, it’s about on par with The Big Fix, starring Richard Dreyfuss, but not nearly so good as, say, The Long Goodbye!
Posted by Burl at 15:07

Email ThisBlogThis!Share to TwitterShare to FacebookShare to Pinterest
Labels: 1980s, comedy, mystery, newspaper, saw it on the big screen