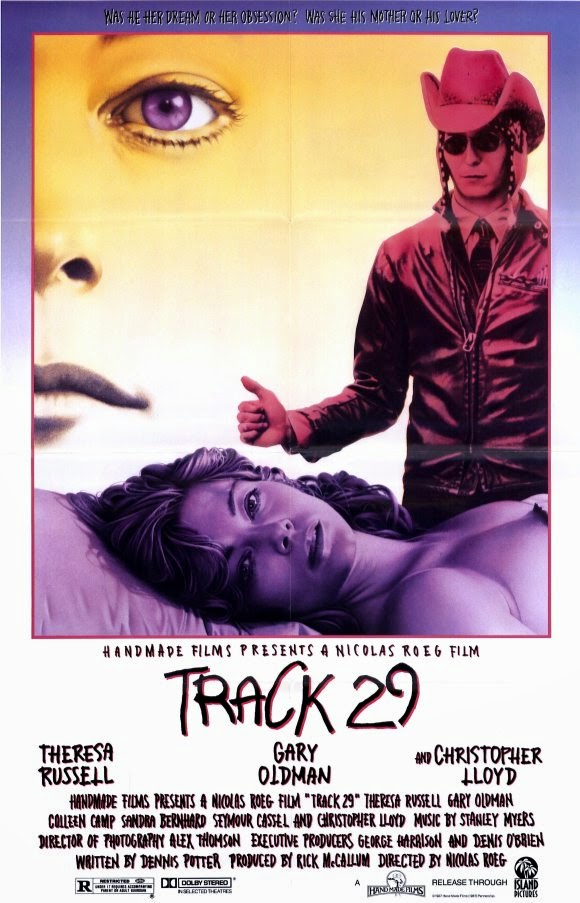 Choo choo, it’s Burl! Yes, ha ha, it’s me again, here with a review of a Nicolas Roeg movie! I know what you’re saying: isn’t this the fellow who photographed Roger Corman’s Masque of the Red Death? Ha ha, what’s he doing directing a picture? Well he’s directed plenty of pictures actually, beginning with the time he worked with Donald Cammell on Performance!
This movie, like so many of his movies, features his wife Theresa Russell, well-known for her role in Black Widow! The picture is called Track 29, and I do believe I saw it at a film festival screening back when it was first released! I thought it was a strange picture then, and I feel the same way now that I’ve had another look at it!
Russell stars as Linda, the wife of model train railroadist and part-time geriatric therapist Henry Henry, played of course by Christopher “Buckaroo Banzai” Lloyd! It’s not a happy marriage, frankly! Well, along comes a strange young Englishman played by Gary Oldman from Sid & Nancy! He catches a ride from tattooed trucker Leon Rippy, who you’d think would be staying away from trucks after Maximum Overdrive, and spends a crazy day with Linda, wherein it turns out he might exist or he might not!
In the meantime Henry Henry catches some brutal glove-spankings from his nurse, Sandra Bernhard – an actress well-known for her part in Sesame Street Presents: Follow That Bird – and some heat from his boss, Seymour “Eye of the Tiger” Cassel! There are plenty of flashbacks, some odd happenings, a truck crashing through a house, a train set destroyed and a bloody nude knife-poking with plenty of spurting blood, and any or all of this may or may not be imaginary!
It’s all not just strange but willfully strange, and therein lies the problem, maybe! It’s a bit too forced, ha ha, and seems the more so when you realize it was all filmed in the same general location as Blue Velvet, a far superior weird picture! The psychology behind all these cornfabulations is pretty dime-book, and none of it is terribly persuasive as recognizable human behaviour!
It’s another effort from moptop George Harrison’s HandMade Films, which made some good pictures like Time Bandits, Mona Lisa and Withnail & I, but also quite a few mandrakes like Shanghai Surprise, How To Get Ahead in Advertising and this one! You’ve got to give them some credit though – they were risktakers who made a pretty good go of it for a while, and left behind some fine, unusual pictures! Ha ha!
But Track 29 just isn’t one of their better ones! It’s hairbrained, which is odd considering the talent involved! Oldman’s performance is goofy and Russell’s is just plain bad! Lloyd is pretty good though, especially in a rousing model train speech scene he gives near the end! Altogether I think the thing to do is shout “woo woo!” and give Track 29 one and a half gurning old men!
Posted by Burl at 12:37

Email ThisBlogThis!Share to TwitterShare to FacebookShare to Pinterest
Labels: 1980s, comedy, drama, oddball, saw it on the big screen