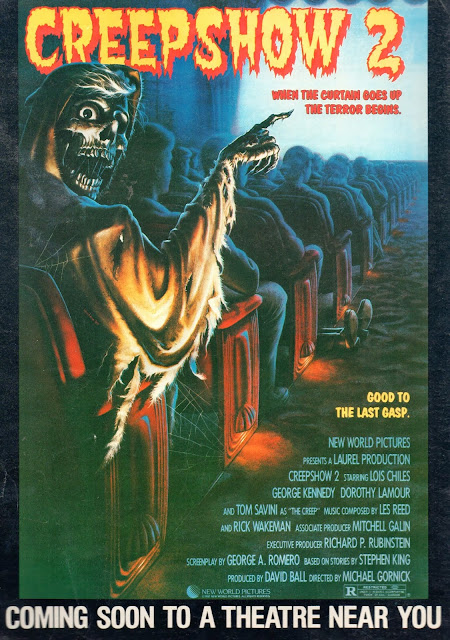 Ha ha, kiddies, it’s Bur-r-r-r-rlllll here! Yes, if I was a horror host or an E.C. Comics spokesghoul, I could hardly be less frightening than Tom Savini in his role as The Creep in Creepshow 2! He’s a great bloodslinger, but Savini just looks goofy in the big-chin makeup and black cape he sports in the opening scenes of this picture! Ha ha, but then it turns to animation, so that’s okay!
I went to see the original 1982 Creepshow with my dad, I remember! Ha ha, O glorious day! By the time Creepshow 2 rambled around, I was old enough to at least make a credible attempt to sneak into an R rated picture, and in this case I was successful! But had I known going in what I would learn before I came out, I probably wouldn’t have been all that concerned about not making it past the crabby lady at the ticket counter!
The sequel offers up three horror comic-inspired tales instead of five, so already you know it’s a bit skimpy on the peanut butter! There was a game of musical chairs behind the scenes, too, with George Romero writing the script and Michael Gornick, the cinematographer of the original, manning the bullhorn! King provided the stories, which somehow feel less like they could have been original E.C. tales than did the stories in the 1982 movie!
The first tale takes place in a dusty little town, the centerpiece of which is a store owned by kindly Ray and slightly less kindly Martha! Ray and Martha, happily, are played by George Kennedy, who is of course well known from such pictures as Hotwire and Death Ship and Just Before Dawn, and Dorothy Lamour, famed for her role in My Favorite Brunette! Naturally a painted wooden Indian stands outside the door! Their store is robbed by a preening longhair and his slobbering pals, and poor Ray and Martha each catch some lead! Well, the Indian creaks to life and takes his vengeance using feathered arrow, tomahawk and scalping knife! Yowtch!
Next we go to a chilly pond in Maine in the middle of which four college students are stuck on a raft, trapped by a hungry garbage bag! Boy, is he hungry! He eats all the students and then the story ends! Ha ha!
Finally there is the tale of an amoral lady played by Lois Chiles, a lot more interesting here than she was in Moonraker! driving home from an assignation! She hits a sou’wester clad hitchhiker, apparently kills him, and then spends the rest of the story trying to get away from the fellow as he reappears over and over, looking more like a chili burger each time and repeatedly thanking the lady for the ride! But why is he thanking her? She didn’t even give him a ride!
The interstitial bits are something about a Venus fly trap and some bullies, but it was animated so I didn’t really pay attention! The movie as a whole doesn’t invite much attention, actually! There are a few nice bits here and there, and some tomato paste (particularly in the hitchhiker story), but frankly, ha ha, the movie is bad, or at least not very good! Its main crime, if you ask ol’ Burl, is in failing to capture the same E.C. spirit found in the original! It’s not just because they didn’t use coloured gels and canted angles, I don’t think – there was a cohesive spirit in Creepshow, with everybody on the same wavelength, working toward the same goal! To me that seemed missing here!
It was a disappointment, I’ll admit! But for a few performances, particularly that of George Kennedy, and some spirited Special Makeup Effects, I’d like to give Creepshow 2 one and a half fresh stripes of war paint!
Posted by Burl at 22:31