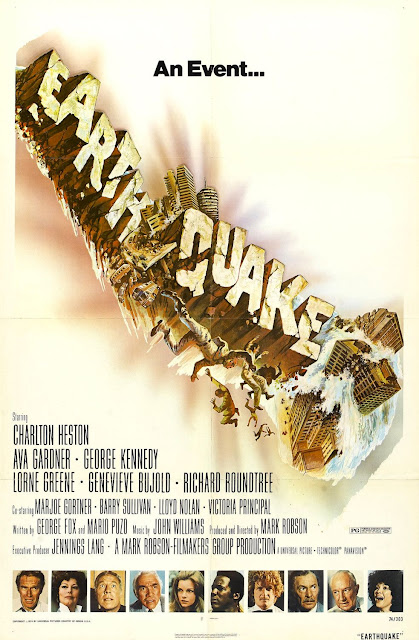 With a rumble and a crack, it’s Burl, here with some more 70s disaster! Yes, it’s Earthquake, and while it wasn’t the first 70s disaster picture (Airport and The Poseidon Adventure came first), nor the best (The Towering Inferno, released the same year is a lot better, and so is Juggernaut of course), nor the most popular (Inferno beat it out at the box office), nor the worst (Ha ha, I’m looking at you, When Time Ran Out!), it is in many ways the quintessence of the form!
There are strange rumblings in the ground, and at the Earthquake Institute, the young graduate student warns of an impending quake, but receives only derisive laughter in return! There are rumblings too in the marriage of Charlton Heston, the ruddyman we know from Touch of Evil and In the Mouth of Madness, and Ava Gardner, familiar from such eccentric pictures as Pandora and the Flying Dutchman and Tam Lin! They don’t get along, and while Ava complains to her father, the only slightly older Lorne Green (well known from his cameo in The Errand Boy), Charleton seeks comfort in the ropey arms of lovely Genevieve Bujold from Dead Ringers!
That’s the soap opera part of the plot, and we have other threads too, like dedicated uniform cop George Kennedy, in trouble for destroying Zsa Zsa Gabor’s hedgerow; and Shaft himself, Richard Roundtree from The Banker, as Miles, the motorcycle daredevil who’s trying to get his spiral run right; and perm-haired creepazoid Marjoe Gortner, from Mausoleum, as the bag boy Jody, a weekend warrior who goes mad with power and also with lust for the even more perm-haired Victoria Principal!
At some point the drum and shake of Sensurround takes hold: the buildings sway, the windows shatter, the elevators plummet, and the cows jump over the moon! Albert Whitlock’s matte paintings of a shattered Hollywood are paraded across the screen as though he’s been given one of those virtual gallery openings which artists must suffer in these pestilent days; but his work is great as always! On the physical effects side plenty of concrete rains down, chasms yawn, bridges fall, the big dam begins to crack, Lorne Green succumbs to a heart attack of all things, and we get all the faux destruction that Universal Studios can provide!
Amid the rubble is a veritable terrarium of familiar faces, like John Randolph from Christmas Vacation, Donald Moffat from The Thing, Jesse Vint from Forbidden World, Kip Niven from Damnation Alley, and, in a cameo under a name I shall not attempt to spell, and wearing an outrageous outfit which I dare not describe, is none other than Walter Matthau from Bigger Than Life! Ha ha, he sits in a bar making drunken remarks, and then later, in a shelter for displaced people, he dances a merry inebriate’s jig, then falls over to the intense amusement of the crowd!
It’s not a good movie, not by a long chalk, ha ha! However, it hits all the 70s disaster bases, never gets boring despite the dumb soapy stuff, has some appealing weirdness here and there (Matthau’s hat, ha ha!), and dares to end things on a muddy, unexpectedly dour, tragically uxorious note! I award Earthquake one and a half truckloads of cows!