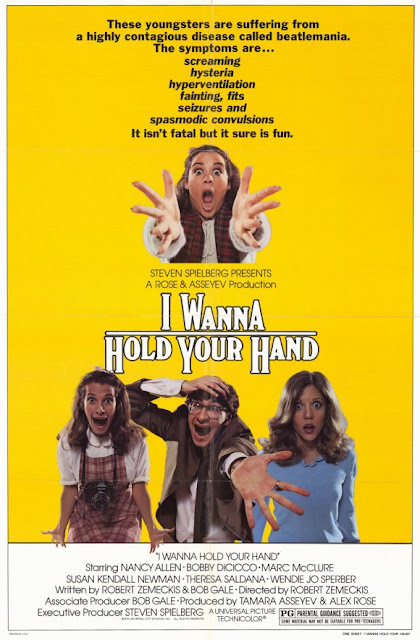 Ha ha ha ha, it’s Burl here to talk Beatles! Well, actually, to talk about a Beatles picture that’s not so much about the Beatles as it is about some fanatical young adults trying their best to see those mopheads as they make their big American TV debut on the Ed Sullivan show! Yes, it’s Robert Zemeckis’s first picture, I Wanna Hold Your Hand!
Zemeckis and his writing partner, Bob Gale, were Steven Spielberg acolytes back in the mid-Seventies, and I guess pals! So Spielberg became an executive producer for the first time and helped the young fellows make this picture! Then of course he selected a number of the cast members buffet-style, for his next picture, 1941! Ha ha, 1941!
Nancy Allen, from Strange Invaders and RoboCop, effectively takes point in this ensemble, and delivers one of her better performances along the way! Her character finds her way into the Beatles’ hotel room, where she has an erotic encounter with one of their guitars, ha ha! In fact, her arc takes her from an upcoming marriage to the world’s most boring fellow to a realization that the Lads from Liverpool are what she needs to achieve the full bloom of her womanhood! Ha ha! Meanwhile, Bobby DiCicco from The Supernaturals and Number One With A Bullet plays a greasemaster who resents the moptopped eclipse of the music he prefers to see on the popular charts! Marc McClure, well-known from The Vagrant, plays a timid nerd who finds his courage in a bottle and commits egregious acts of drunken driving!
Wendie Jo Sperber, whom we know from Moving Violations, and who always brought her A game, plays a fan so delirious in her Beatle love that she passes out and misses the whole show, but, ha ha, doesn’t mind because she’s satisfied simply having been in the same building as her idols! Susan Kendall Newman from Slap Shot plays a young lady who thinks the Fab Four might be a dangerous influence on the larger population of young ladies, but becomes a convert by the end! Theresa Saldana from Defiance plays a goodhearted shutterbug whose gesture of kindness toward the nerd keeps her from seeing the show, but leads to a far greater reward! And of course Eddie Deezen from Desperate Moves appears as the world’s biggest platonic male Beatles fan! Best of all, however, is an appearance from the great and wonderful Dick “The Long Ride Home” Miller, who plays a hotel security guard with a peculiar fixation on lamps!
Well, as might be expected from a Zemeckis picture, there’s a lot of craziness, but since it was a pretty low-budget picture, it’s kept relatively small-scale! Still, there are many impressive crowd scenes, and the period detail is persuasive! But there may be too much detail – the movie’s middle section, intercutting the kids’ adventures in and around the hotel, gets kind of repetitive and seems to go on a long time! Ha ha! It’s an entertaining picture, but never gets really great, or really exciting, or really funny! But it’s frequently a little bit of one or more of those things, and with the generous dash of Miller it offers, I declare the picture to have been well worth watching! I give I Wanna Hold Your Hand two and a half lamps that are on!
Posted by Burl at 15:00