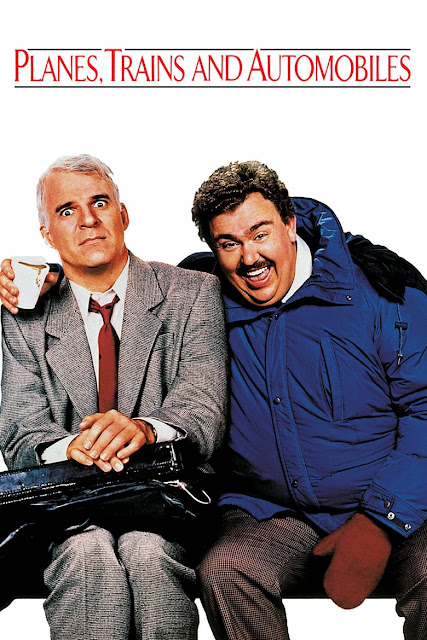 Ha ha and best of Thanksgivings to my Yankee Doodle friends! Yes, here for you is one of the quintessential American Turkey Day movies, Planes, Trains & Automobiles, which has no particular holiday resonance for me, being Canadian as I am, but is a perfectly enjoyable picture simply on its own merits! I like it better than Uncle Buck, anyway, ha ha!
Anyway, a viewer looking for Canadian content need look no further than John Candy, who alone provides a great deal of content, ha ha! This beloved comedy star, admired for his appearances in pictures like Summer Rental and Armed and Dangerous, and of course that other holiday classic The Silent Partner, plays shower curtain ring salesman Del Griffith, who travels around hawking his wares and making friends everywhere he goes! Meanwhile, uptight Chicago ad man Neal Page, in New York for a presentation, wants to get back to Chi-town to be with his picture-perfect family for the holiday! Neal is played by silver-domed Steve Martin, famed for roles in All of Me and ¡Three Amigos!
This picture is the story of their trouble-filled journey from Wichita, where foul weather forces them to land, to Chicago, and of course there are many delightful happenings along the way, and strong performances from both Martin and Candy! Ha ha, in fact, I think this may be Candy’s best work! Alongside the delights there are plenty of patented John Hughes moves, like the ascension of minor inconvenience to high tragedy when the victim is a white upper middle-class fellow; the absolute fealty to bourgeois family ritual; sudden sledgehammer blows of sentiment; and the use of horror movie tropes like musical stings and oblique cinematography to introduce working class characters, who are supposed to be naturally terrifying, I guess, unless they’re founts of wisdom like Carl the janitor in The Breakfast Club! Ha ha!
It’s a two man show for the most part, but Hughes sprinkles in plenty of cameos and familiar character faces! Kevin Bacon, well known for his appearance in Friday the 13th, shows up as a young businessman trying to get the same cab as Neal; Michael McKean from D.A.R.Y.L. turns up near the end as a highway patrolman; Larry Hankin from Escape From Alcatraz is Doobie the cabbie; Richard Herd from Summer Rental and Gary Riley from Summer School are in there too, along with plenty of others! There are even familiar voices, like that of Chino ‘Fats’ Williams, who is an unseen bus driver here, and was one of the old boys in the blues bar in Weird Science!
Anyway, we all know the story and we all know the jokes, and probably most people feel Planes, Trains & Automobiles is as much a comfy blanket to put on in a cold season as it is a movie! Ha ha! But it raises a lot of questions, too - things that are maybe explained by the rumoured four-and-a-half hour original cut, ha ha! I wonder if that wouldn’t have been a bit much? Anyway, I wonder how it works out after the concluding freeze frame on John Candy’s face: did Del stay for Thanksgiving dinner? Did the in-laws all accept him? Where did he go after that? Who paid for the destroyed rental car? Ha ha, I give editor Paul Hirsch a lot of credit for putting it all together and leaving room for all the comedy smash cuts Hughes was so fond of!
Well, it’s a solid little picture, not beloved by me, but I admit it has a comfy feeling to it! I saw it at the theatre, maybe on not exactly a date but one of those little co-ed gang outings that sometimes happened! Ha ha, I saw The Breakfast Club that way, too, which was apt! In any case, it gave me a fondness for both these Hughes works that I might not have otherwise, and so I give Planes, Trains & Automobiles two and a half pillows!
Posted by Burl at 00:22