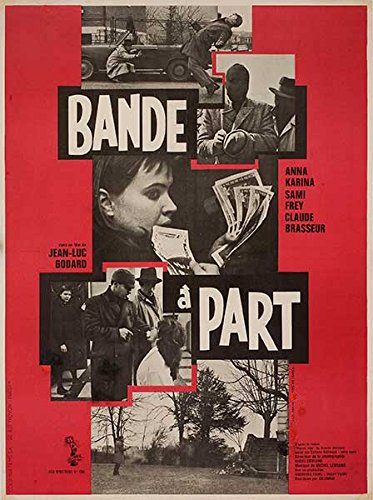 Et tu, c’est Burl! Hé hé! Yes, I have a French picture for you today: a small delight from Jean-Luc Godard entitled Bande à part, or, for the Englishers, Band of Outsiders! Of course we know Godard from his first picture Breathless and the many other great films that came after, and the confounding ones too, ha ha! I’ve never met the man myself, but I did sit directly behind him once at a cinema as the movie played, and I count that an appropriate encounter!
I suppose Quentin Tarantino must have taken his company name from this picture, and that computes because it’s a crime drama more or less, like the marvelous Breathless was, but even more Godarded up, and with characters who love gangster movies, and plenty of discursive scenes! Here we have two buddies, Franz and Arthur, adrift and disreputable, who meet the winsome Odile in an English language course, and, while both angling for her favours, try to convince her to help them pull a robbery on the rich old man who boards in her aunt’s house, where Odile also lives!
Odile is played by Anna Karina from Justine; Sami Frey from Sweet Movie and Black Widow is Franz; and playing Arthur with an ever-increasing sense of potential violence is Claude Brasseur from Eyes Without a Face! This trio crack against one another like multiballs, with the two fellows putting increasing pressure on Odile to help facilitate the robbery, and the fellows getting increasingly fractious with each other over Odile! For some reason Odile falls for Arthur, who, ha ha, is a real jerk, and one is afeared of another ending like that in L’Avventura! (I’d seen this movie before my recent viewing, but not for years, so I couldn’t remember how it resolved!)
Narration from Godard himself occasionally gives us insight into the characters’ thoughts and feelings, and this is an ingratiating feature indeed! On the debit side is how they treat their nifty little car, ha ha! Of course the centerpiece of the picture, the scene everybody remembers, which, notably, has nothing to do with either the romantic conflict nor the supposed heist plot, is the spontaneous dance scene in the café! Ha ha, they must have practiced that one a couple of times, and that’s the great charm of the scene! Somehow, having nothing to do with anything, it increases the emotional stakes and sets our characters on their way into the second half of the movie!
Well, it’s all very Godardian and beautifully styled, even if it takes place in a rather bleak Parisian winterscape! Ha ha, it’s still Paris after all! It’s got more thrills in it than I remembered - in my memory it was a movie about people who wanted to do a crime, but were simply too lazy to go about it! But no! The heist happens, but of course it doesn’t go exactly as planned! And that’s to be expected with Godard, ha ha! I suppose this is one of his minor works, but it’s a solid little piece of New Wavery, and the cast is terrific, particularly the lovely Karina! I’m extremely fond of Band of Outsiders, and I give it three and a half high speed runs through the Louvre!
Posted by Burl at 20:28