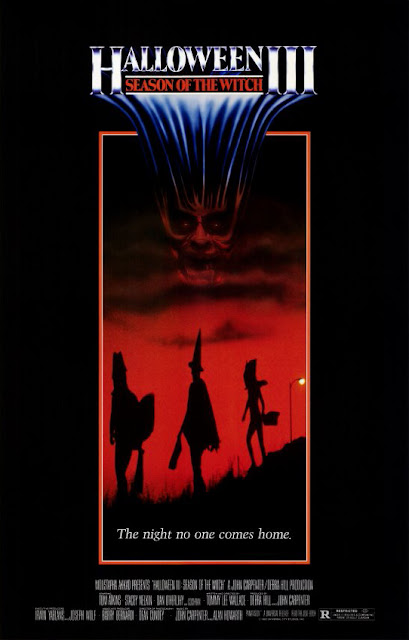 Hi, Burl here to review the most loathed of all the Halloween movies, which is to say number three, the one with no Michael Myers! But it’s not loathed by me, and I find it a lot more entertaining than some of the other later entries! For example, there was one involving some sort of reality show that I found nearly unwatchable! Ha ha, I can’t even remember the title of that one!
But Halloween III discombobulated everyone by having nothing to do with Halloweens I and II, and considering that Michael Myers, the masked knife-maniac from the earlier pictures, had been blown to flinders in a hospital conflagration, it seems an understandable move on the part of the filmmakers! They thought it made more sense to brand the title and, in essence, the holiday along with it, at least as it pertained to horror movies; and then the idea would be to make a different Halloween-themed movie every year!
I actually think that’s a pretty good idea, but Joe Moviewatcher evidently did not! I went to see Halloween III when it came out (very excitedly, though I was on the young side for such a film), but I must have been among the few! Anyway, you’d think with the combined star power of Tom Atkins (from The Fog) and Dan O’Herlihy (from Fail-Safe) there’d be an enthusiastic audience for such a photoplay, but it was just not the case! Perhaps when word got around of the incredibly annoying commercial jingle heard repeatedly throughout the film, the constituency that normally would have flocked to it got scared off! Ha ha, ya bunch of wimps!
The story is simplicity itself! A man comes running down the street holding on to a pumpkin mask, and then later in the hospital a strange businessman pops out the man’s eyes and then pulls his face up! This leads to an investigation on the part of a local doctor's moustache and the dead man’s curly-haired daughter, and together they discover the nefarious toy company, staffed largely by robots as it turns out, which is the headquarters of a warlock named Colonel Cochrane! I don’t know in which army Cochrane achieved the rank of Colonel, but their recruiting standards are very lax!
Anyway, the Colonel has a plan: blast the skulls of America’s children into fishsticks by selling them rubber masks equipped with laser beams, which will be set off Halloween night by some unholy combination of the aforementioned jingle and the rocks of Stonehenge! His witchery, his weird science and his robot army are pitted against Tom Atkins’ moustache, and we all know that in such a contest there can be only one victor!
Ha ha, this movie is the goofiest thing ever, but I feel a great deal of affection for it! I love the grotesque makeup effects, like the lady who gets accidentally blasted in the face! I love that snakes and bugs are somehow generated when the lasers go off! Ha ha, poor Little Buddy! I like Tom Atkins’ heroics! And it’s great that the Colonel’s plan is so odd and insane and pointlessly sadistic and, as far as we can tell from the sudden cut to black at the end, successful!
It could have been a better movie, I’ll grant you that! If John Carpenter had directed it in full Prince of Darkness mode and made it a little more dynamic, suspenseful and scary, we might have a full-on Halloween classic on our hands! Instead we have more of a curio, a thing some will take to their hearts and most will hate or just dismiss, like those hard, sticky orange-wrapped candies that used to fill the bottom of your bag at the end of a long night of trick or treating! Hey, I liked those candies! I give Halloween III two and a half pulled-off bum heads and all the arterial spray that goes with it!
Posted by Burl at 00:21