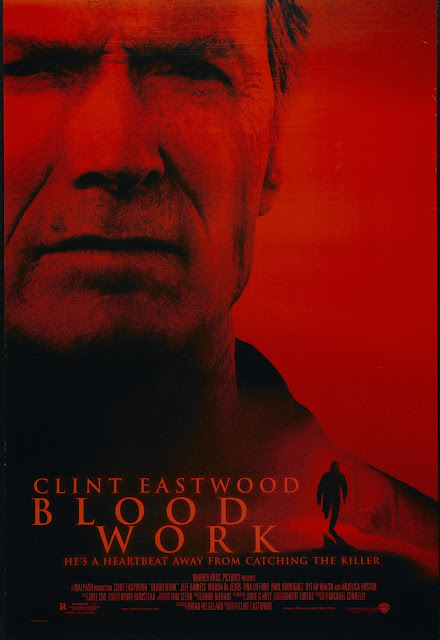 You have the right to remain reading! Ha ha, it’s Burl here, ready and willing to review another movie for you! It’s Clint Eastwood doing a cop thriller again, one very much in the vein of Tightrope and other one-offs (The Gauntlet, The Rookie, In the Line of Fire) where he plays an iron-nosed cop not named Harold! In this one he’s an “FBI profiler,” but he acts just like any other cop, though his iron-nosedness, or at least his ability to act on it, is compromised by a serious heart condition! Ha ha, the movie is called Blood Work!

Eastwood, who of course is well known from Tarantula and many other fine films, as well as from bad films like City Heat, plays Terry McCaleb, who in the opening scene is investigating a mystery murderer who not only likes to kill, but, in the traditional late-90s/early-oughts style, is fixated personally on McCaleb in that taunting, teasing way such serial maniacs have! McCaleb spots a suspect, gives chase, and the next thing you know is collapsing of a massive heart attack!

Two years later McCaleb has a new heart, is retired, and is rusticating on his cabin cruiser docked at the marina in Long Beach! This Quincy-esque lifestyle is interrupted by the reemergence of the killer, who still carries a McCaleb fixation, and by the appearance of a woman called Graciella, played by Wanda De Jesus from Robocop 2 and Ghosts of Mars, who reveals that McCaleb’s new heart came from her sister - who was one of the killer’s most recent victims! This is a pretty good hook, and the movie settles into a laid-back investigative groove, with McCaleb enlisting his slacker boat-neighbour Buddy, played by Jeff Daniels from Speed and Arachnophobia in full Jimmy Buffet mode, to be his driver!

Meanwhile McCabe’s heart transplant doctor, played with plenty of finger-wagging by Anjelica Huston from The Life Aquatic with Steve Zissou, admonishes him not to do any investigations lest his new ticker explode; and he also gets static from the cops on the case, played by comedian Paul Rodriguez and Dylan Walsh, the blando from Congo! But he has a cop ally too, played by Tina Lifford, and we get hints that they were once something more! Ha ha! As all this is going on, McCabe clutches his chest a lot and falls for Graciella, and the twist ending becomes as obvious as a panda in a swimming pool!

The movie takes a tone and a pace that matches up with the yachtsman’s lifestyle enjoyed by its leads, and while this is perhaps not the optimum approach for a putative thriller, it’s just that old leatherbag’s way! He makes his movies in that same relaxed manner, so they say - practically keeps bankers’ hours! Ha ha, never let it be said that Clint Eastwood ever kept a grip from having his dinner at home!

In any case, while Clint has made some memorable movies, this is not one of them! It’s a fairly stolid piece, competent but never exciting, perfectly watchable but as ephemeral as an episode of TV! I saw it at the dollar theatre with my friend Pellonpaa, and at the end of it we both agreed we’d seen a movie! Ha ha, and when I watched it again recently, my takeaway as the credits rolled was about the same! I give Blood Work one and a half notes written on the wall in, you guessed it, blood!