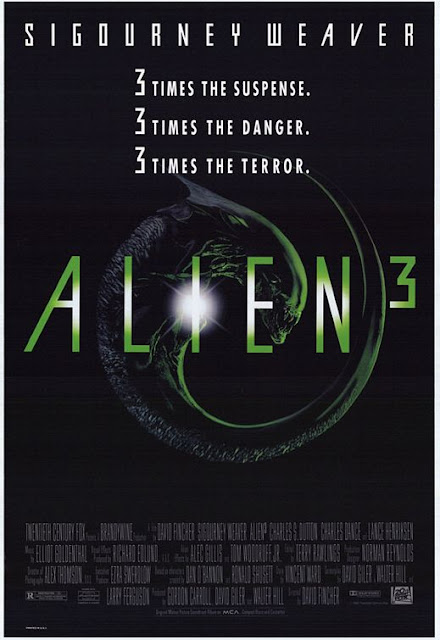 This is rumour control, ha ha: here are the facts! Yes, it’s Burl, here to review the first feature from David “Gone Girl” Fincher: Alien 3! I saw this one in the movie theater of course, and remember thinking that it was a curiously grubby affair, and a decided, even egregious, change from the thrills we well recall from Aliens! I watched it again more recently, and it’s still a rusty barnacle, ha ha!
Sigourney Weaver of Ghostbusters returns once again as Ripley, who awakes after a crash landing to find that both Newt, the little girl she spent the entire previous picture rescuing, and Hicks, her good Marine friend, have been unceremoniously killed by the impact! She’s not exactly back home though: she’s stuck on a prison planet, or at least the remains of a prison planet, where only a small fraction of the prisoners have been left behind at their own request! Ha ha, this was a Troubled Production that went through a number of iterations before the Fincher version came out, and back when the movie was supposed to be a Vincent Ward picture, it was a gang of space monks living on a planet made entirely of wood! Ha ha, I’d sure like to have seen that version!
So we have prisoners instead of monks, but they’re a highly religious bunch who’ve taken vows of celibacy, so we’ve essentially got monks anyway! Charles S. Dutton from Mimic is one of them, as are Paul McGann and Ralph Brown from Withnail and I; Charles Dance from For Your Eyes Only is the resident doctor, and Brian Glover from An American Werewolf in London and Jabberwocky plays the warden! The alien shows up too of course, having reborn himself from a dog, so he’s more doggy-shaped than in previous installments! Ha ha!
Of course he puts a biting on the various prisoners, who are pretty resentful of Ripley for bringing it to their world! Naturally Lance Henrikson from Pumpkinhead and The Horror Show appears playing the human model for the android he achieved his fame with in Aliens (the human version is just another slimy executive of that nasty troublemaking corporation, it turns out), and there’s a climax that echoes not just that of Revelations 19, but of Terminator 2 as well! Ha ha!
The picture certainly looks good, all brassy and dirty and grim thanks to the camerawork of Alex “The Keep” Thomson; the acting, too, is strong, with Glover a particular highlight; and there’s are occasionally moments that recall the terrific original! But it’s not as atmospheric as it would like to think it is, and the narrative is a real sauce! Plus, I find it curiously forgettable somehow: I remember seeing it, but not that much what actually happens in it! Ha ha, it’s not scary either! So I’m going to give Alien 3 two instances of rumour control!
Posted by Burl at 10:04