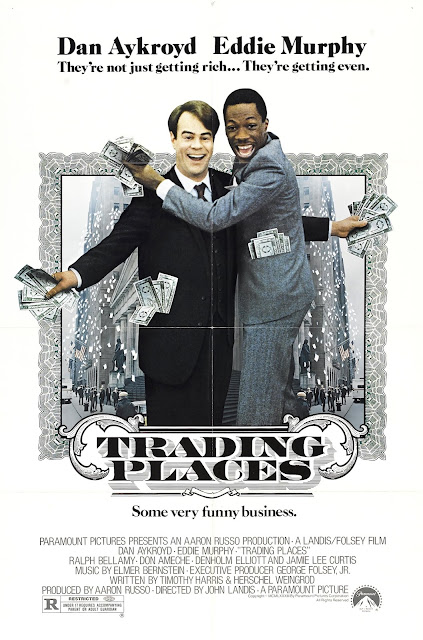 …And she stepped on the ball! Ha ha and ho ho ho, it’s Burl, here with another non-Christmas movie set around the holidays! Of course I’m talking about Trading Places, the comedy classic made by John “Into the Night” Landis! It’s not a particularly Christmasy picture, but it does have a scene in which one of the stars, Dan “The Great Outdoors” Aykroyd, inebriates himself and dresses as a dirty Santa! Then he says “Bluaaaghhhh, blargh!” Ha ha!
We all know the plot! Here we have the rough-edged but good-hearted ne’er-do-well Billy Ray Valentine, played by Eddie Murphy of Beverly Hills Cop fame, and the posh fancylad Louis Winthorpe III, played by Aykroyd; and we have two elderly superwealthies, the Duke brothers, who like to play hob with people’s lives! Ha ha, the plot begins when the Dukes – Bo is played by Ralph Bellamy from The Wolf Man, and Luke is Don Ameche from Heaven Can Wait – make a bet on whether, if they switch these fellows around, putting Billy Ray in the catbird’s seat and Louis in the gutter, Billy Ray will become a respectable commodities broker and Louis a criminal street bum!
There are many misunderstandings and crenulations, and characters like the kindly butler (Denholm Elliot from Indiana Jones and the Last Crusade), the kindly prostitute (Jamie Lee Curtis from Grandview U.S.A.) and the not-so-kindly dirtytricksman (Paul Gleason, the well known meanie from Night Game and Die Hard and Welcome to Spring Break and Morgan Stewart’s Coming Home) figure in; and Christmas comes and goes, and there’s a train gorilla and some crop reports, and a big final scene on the commodities trading floor!
Well, it’s the oldest tale in the book, really, and the director, young Landis, tells it in his usual straight-ahead style, with a few ingratiating looks into the lens and other trademark moves! Of course, we have to mention how unbelievably quickly Billy Ray turns from jive-talking con man to expert commodities broker, juggling pork belly futures as he used to handle discarded gutter-butts! We expect to withhold some disbelief in a picture like this, but even with that feature engaged, and an understanding of the exigencies of plot movement, it seems a bit of a quick transformation!
But there’s lots to enjoy! The cast is great, even when they’re playing the oldest clichés in the book, like poor Jamie Lee and her hooker-with-a-heart-of-gold! Eddie Murphy provides one of his finer performances, if you ask ol’ Burl, and Dan Aykroyd does prep-school nimrod almost as well as he does earnest techno-drone, which is saying an awful lot! It would have been nice to see John Candy in here somewhere, but you can’t have it all, I guess! I’m going to give Trading Places three eye-rolling gorillas that were somehow not created by Rick Baker!
Posted by Burl at 09:36