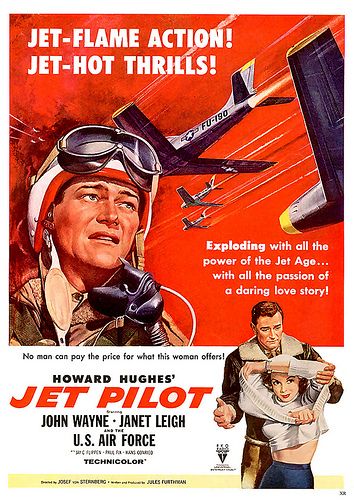 Up up and away, it’s Burl, here to review aeronautical derring-do! Ha ha, we’re all familiar with the Duke, which is to say John Wayne, and his many horse operas, from Randy Rides Alone to Rio Bravo! But in today’s picture he’s bestride a different sort of saddle: the pilot’s seat of the latest in jet fighter technology! The picture in question is titled, with admirable prosy, Jet Pilot!

The Duke stars as Jim Shannon, one of the Air Force’s top wingsmen! When a pretty pilot called Anna, played by Janet Leigh from Halloween H20 and The Fog, drops into the Alaskan air base run by General Jay C. Flippen (an actor we may recall from Thunder Bay) and requests political sanctuary, Shannon is enlisted to keep her company! They fly around together and of course fall in love! Ha ha, but is she truly sweet Anna, wholeheartedly wanting to defect, or is she the duplicitous Olga, sent in order to lure the lovestruck Duke back to Mother Russia?

The answer, it turns out, is “both!” But there’s a lot of back and forth along the way, and plans within plans, and chumps made on both sides! Ha ha, Anna and Shannon even get married, and you know what that means - blanket hornpipe! Considering the political leanings of both the Duke and of Howard Hughes, who produced, or anyway “presents” the picture, we can be pretty sure from the start which side will prevail! In the meantime, some fun is made of Anna’s socialist values, as when she notes that a hotel suite is far too large for just two people, so invites a number of other, including Paul Fix from Night of the Lepus, to bunk with them!

Ha ha, the picture was released in 1957, but a little research taught me that it was shot in 1950, so that all the cutting-edge technology it wanted to show off had long passed its sell-by date! At this remove of course that doesn’t matter much, and so we’re left with a whole heck of a lot of excellent flying footage, with the pilots doing little rollover tricks, and voiceover radio chat between “A for Anna” and “S for Shannon!” But the aeronauts seem to fly everywhere all the time, and it eventually gets tiresome!

When the Duke follows his bride back to Russia, he finds Hans Conried from Summer Stock, The Monster that Challenged the World and The Twonky running the show, and that Anna has reverted to her more Soviet persona, Olga! She flips back and forth between these identities, even seeming to change her hair colour sometimes, and I found it as confusing as the Duke did! Leigh’s character is as split as that of her later co-star in Psycho, ha ha, and when she starts casually murdering people at the end, by tricking them into pulling ejection seat handles at inopportune moments for example, she seems more a narrative instrument than a character at all!

A funny thing about Jet Pilot is that it was directed, nominally at any rate, by Josef Von Sternberg! Ha ha! It really doesn’t seem like his sort of picture, and the picture itself doesn’t seem much like it was directed by von Sternberg! Still and all, that’s a pretty interesting fact! Hughes was the real auteur here, I suppose! But the overlapping part of a Hughes/von Sternberg Venn diagram is eroticism, and somehow this is a strangely sexy movie! Leigh looks great in her flight suit; she loses her harem pants at one point and is almost spotted trouserless by a marching band; and after their marriage, there are several references to the notion that Leigh and Wayne are doing nothing besides bohankie all the day long! It starts right from the beginning, as the Duke observes Leigh warming her bum at a stove and musing “This might be some new form of Russian propaganda!” 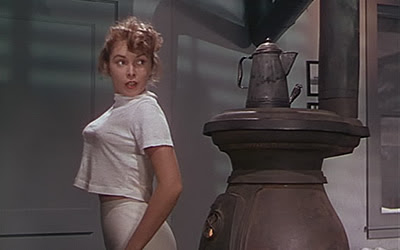 The flying scenes are impressive, but too long and too numerous; the geopolitics are childish and binary of course; and the characters are little more than blank figures moved around the landscape like quoits! It’s entertaining in its 1950s way, but seems more an interesting relic than a piece of cinema! But if you like watching jets fly around, this is the motion picture for you! I give Jet Pilot one and a half barrel rolls!