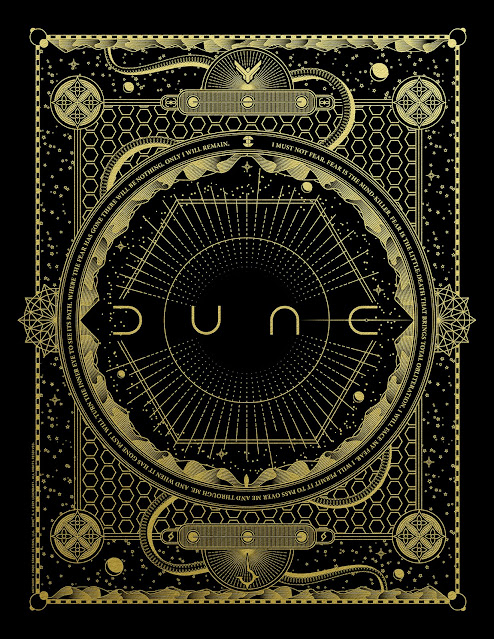 Wey wey hep-a-hole, it’s Burl, here with another big-screen review! Yes, today I’d like to talk about the new superproduction of Dune, rather than the old superproduction of Dune made by that man David Lynch so long ago! As compromised as that older picture was, it was still a fine entertainment I thought; but it was not really the book! And as much as we all wish we could see the Alejandro Jodorowsky version that never was, it probably wouldn’t have been the book either, or at least the book that’s in my mind! This new version, brought to us by the bontempi film artist Denis Villeneuve, is the book, or at least about five eighths of it, both for better and for worse, and accordingly, with the rest of it apparently on the way, the official title of this picture is Dune Part One!

We recall the story! It’s the far future and the desert planet of Arrakis, the only source of an incredibly valuable spice that makes cosmic travel possible, is the locus of all sorts of interplanetary intrigue! The Emperor of the Universe sends the nasty Harkonnens (a name pronounced differently here than it was in the Lynch version) back from Arrakis to their greasy home planet and installs the more beneficent Atreides royal family as caretakers of the spice-mining bonanza; but this is all a plot to launch a surprise attack on the Atreides, which in turn forces the young scion of the Atreides family, along with his mother Jessica, out into the desert to make common cause with the indigenous Arrakians, called Fremen!

Paul Atreides, the manchild of destiny, is played by a young flyaway called Timothée Chalamet, and I don’t think he quite caught the character the way Kyle MacLachlan did back in 1984! He’s not terrible or anything, just a little flat! His father, Duke Leto Atreides, is played by Oscar Isaac from Inside Llewyn Davis, and he’s good too, but he never has a moment as poignant as Jürgen Prochnow did in Lynch’s picture, staring out at the oceans of his home planet Caladan and wistfully saying “I’ll miss the sea!”

Rebecca Ferguson from Doctor Sleep and The Kid Who Would Be King is Paul’s mother Jessica, and she’s ideal for the part, if a bit young! We get a veiled crone performance from the terrific Charlotte Rampling of D.O.A. fame, here playing a witchy Reverend Mother; an earthy, or perhaps sandy, turn from Skyfall’s Javier Bardem in the role of Stilgar; and Stellan Skarsgård from The Hunt for Red October and Deep Blue Sea is the nasty Baron Harkonnen, not quite so covered in furuncles as his 1984 counterpart, nor as demonstrative in his appetite for boyjuice, but somehow even grosser nevertheless!

In grossitude he is nearly matched by the enormous worms that plow through the desert, but in this truncated version of the story these guys don’t yet play a big role! However, ha ha, there is a very satisfying scene in which one of them gobbles up a few Harkonnens like they were junior mints, just as its distant cousin on Tatooine, the All-Consuming Sarlacc, so enjoyed to snack on Jabba’s men! Again I say ha ha!

A recurring theme is of one out of four things not working properly: we see, for example, that a carryall meant to lift a spice harvester out of worm danger fails because one of its four hooks cannot deploy properly; later, that one of the flappy wings on the ornithopter in which Paul and Jessica flee the Harkonnens becomes choked with sand and goes limp; and that ultimately, of the four allegedly loyal House Atreides councilors and men-at-arms - Thufir Hawat, Gurney Halleck, Duncan Idaho and Dr. Wellington Yueh - one of them is not to be trusted!

In some ways the movie is almost doggedly faithful to its source - one occasionally longs for some flights of imaginative fancy that come from the filmmakers alone! The only changes, additions, elisions or other departures from the Frank Herbert text are borne of utility, however, and there’s something a bit too literal and acolytic about this approach! The same goes for the musical score, which does the job effectively, but something a little more adventuresome and experimental might have been nice!

Still, it’s all very gorgeously made and properly immersive, moves at a stately pace but never bores, and seems to end prematurely, and so I find I’m looking forward to Dune Part Two! There will be lots of fighting and battle scenes and, one hopes, worms! Ha ha! I give Dune Part One three gom jabbars!
Posted by Burl at 14:30