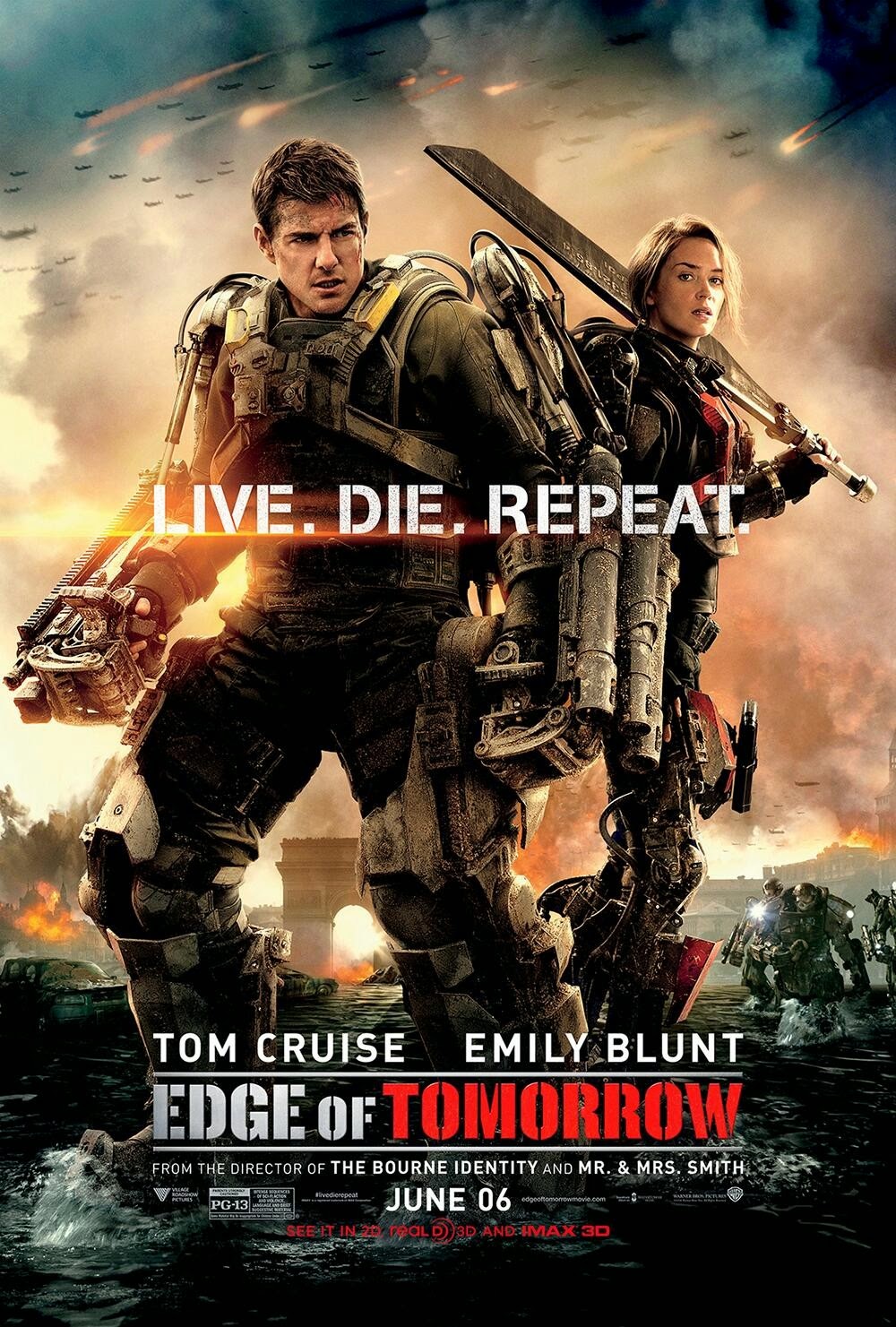 Hi, Burl here, to review a new science-fiction picture about time loops! Hi, Burl here, to review a new science-fiction picture about time loops! Ha ha, did I get you there? No, you’re not in a time loop – I’m just here to review a picture with the soap-opera-y title Edge of Tomorrow, which is a science-fiction picture about time loops that I’m here to review for you, here to review for you, here to review for you! Ha ha!
Yes, I do admit that this picture features Tom Cruise, who is well-known from Jack Reacher; but did you realize that this movie gives you multiple chances to see Cruise die horribly on screen? It does! I mention this for those who dislike Cruise! I myself have no strong feelings about this particular thespian, though I did feel that the opening scenes of the picture, in which Cruise plays a glib and craven army PR man, match his public persona almost as well as his role in Magnolia!
Cage is the name of this character, and after an extremely efficient opening in which we learn, within less than two minutes, that a) the world has been invaded by buggy-wuggy aliens who have conquered Europe; b) Cage has been tasked with selling the war to those who think it strictly a European problem; and c) that a lady named Rita has emerged as the combat’s greatest hero so far, has been named The Angel of Verdun and has proven a handy tool for Cage’s propaganda, it only takes a further two minutes for Cruise to so offend General Brendan Gleeson that he’s shanghaied into service as a grunt in the imminent D-Day invasion!
Quickly, Cage is killed by the whipper-snappery creatures, but he’s gained the power of reset: each time he dies, he returns to Forward Operating Base Heathrow (where I myself recently spent some time thank you very much!) and begins the day again! He further learns that the same thing happened to The Angel of Verdun, and that it’s up to the two of them to find and destroy the evil central brain that controls the entire invading army! So, as every single other reviewer of this picture has pointed out, what we have here is Starship Troopers meets Groundhog Day!
Indeed the picture is almost precisely that, and moreover it’s as entertaining as that co-mingling would suggest! Ha ha! As the movie goes on and Cruise must lose his cowardly-incompetent persona, becoming something much closer to the usual Cruise character (even repeating his grenade-pin trick from War of the Worlds near the end of the picture), it necessarily loses a bit of juice, but you can see a real effort is being made to be at once propulsive and at least a bit intelligent!
Of course there are the usual wild improbabilities, but that sort of stuff doesn’t trouble ol’ Burl much in pictures like this! We also get several scenes with a science doctor who has the entire alien deal figured out, but no one will listen: a character who seems plucked whole from Pacific Rim (and other pictures too of course!) and whose scenes are Terex MT-sized exposition dumps! And there’s an ending that (for me anyway) raised a lot more questions than it solved, but is at least improved by sharp cutting!
It’s frequently clever, not just in the writing, staging and editing, but when it comes to such details as casting! Bill “Weird Science” Paxton plays a Kentucky sergeant, the sort of character we’ve seen ten million times before, including in such pictures as Paxton’s own Aliens, ha ha, but appears most specifically modeled on Michael Ironside’s teacher-turned-topkick from Starship Troopers! He’s fairly perfect in the role!
Even though I couldn't usually care less about box-office figures, particularly for blockbusters, I am rooting for this one to make some dough, just so medium-smart non-sequel movies might keep getting made! Of course, while it's not fair or accurate to put everything at the doorway of this picture, it does feel like something of a bellwether! In any case, for summer enjoyment, I’ll give Edge of Tomorrow two and a half crushings by army truck! Aiiii, ha ha!
Posted by Burl at 00:59

Email ThisBlogThis!Share to TwitterShare to FacebookShare to Pinterest
Labels: 21st century, action, saw it on the big screen, sci-fi