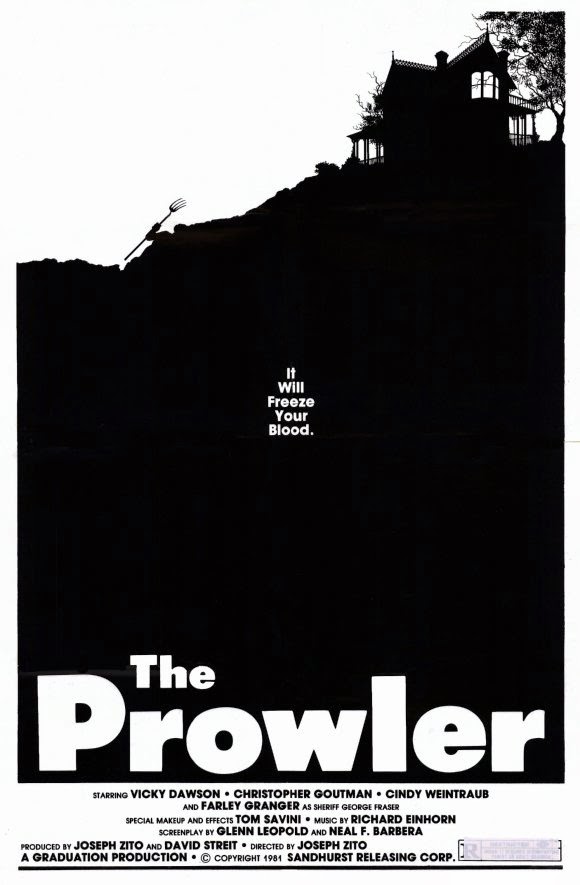 Ha ha, Burl here to review another one of what some call the Classic-Era slasher movies! This one has a bit of a pedigree to it, or at least a retroactive pedigree if you follow me! It’s called The Prowler, and was directed by the same fellow who later made Friday the 13th part 4! It also features some gruesome trick effects by Tom “The Burning” Savini!
It’s a pretty typical slasher picture in many ways, though the inciting incident takes place a little farther back in history than most! World War II has just ended, and here we are at a college dance being attended by Rosemary Chatham and her new boyfriend! Her former boyfriend was a GI whom she broke up with by that time-tested method, the Dear John letter! Only this John isn’t so dear, and he uses a pitchfork on poor Rosemary and her toffeenosed beau!
Thirty-five years after this horrific incident it’s time to bring back the dance! Ha ha! Pam, a blond newshound, is our main character, and her boyfriend, The Deputy, is meanwhile put in charge of public safety as the sheriff is goin’ fishin’! Ha ha! The crazy kids go ahead with their dance preparations with the same single-minded devotion as the kids in My Bloody Valentine, and pretty soon the prowler of the title, brandishing his trusty pitchfork and a sharp bayonet, goes on a one-by-one rampage of brutal pokings!
There’s meanwhile a gallery of middle-aged men available to suspect of being the killer, including but not limited to an irritable shopkeeper, a lumbering oaf, and old Major Chatham, played by Lawrence Tierney from Silver Bullet and The Horror Show! Ha ha, the Major is mute and wheelchairbound, but he keeps popping up in all sorts of places, no matter the terrain, just to show that he can get around when he needs to! Ha ha!
In so many and varied ways, this picture is a goofnugget! The pokings are particularly vicious, particularly a pitchfork poking that takes place in a shower; but at the same time, potential victims like Thom Bray (the bicycle nerd from Prince of Darkness) and his ladyfriend, appear to be in some sort of basement peril while on a search for a makeout cavern, but then they just disappear! Ha ha, I suppose they were next on the list, but there was no time to shoot their death scenes!
And this has got to be the worst picture on record for dumb decisions made by the characters! What do a policeman and his intrepid lady sidekick do the moment they realize a madman killer is loose? Why, head over to visit old Major Chatham of course, and wander around in the dark! And of course The Deputy, evidently no brain wizard, immediately suggests they split up! On top of this, there’s a long sequence in which The Deputy, phoning the Sheriff's fishing lodge in an attempt to ask him what to do about the local madman, is foozled by a tubby desk clerk on the other end of the line, who only pretends to go look for the vacationing lawman! This twenty minute scene is pointless and unbearable!
Even with all of this, the picture has that cozy familiarity that early 80s slasher films can sometimes gin up! I like the blue cinematography that comes courtesy of Joao Fernandes (working under a pseudonym for some reason, just as he did on Children of the Corn); why, this must be the bluest slasher movie outside of Madman! And though the ringers – Tierney and Farley Granger, mainly – are wasted, one is glad to see them at all! It’s by far not the best of the so-called Classic Era slashers, but it’s far from the worst either! It sits right about in the middle, so I’m going to give it two turned-up eyeballs!
Posted by Burl at 22:09