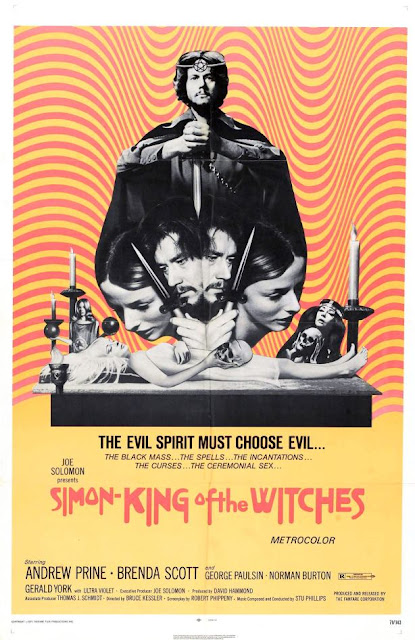 Ha ha and zim-zam-zoom, it’s Burl, here to review a story of witchery and hippery and rainstorms! Yes, it’s Simon, King of the Witches today, a tale of supernatural doings in the streets of the fictional town of West Side!
The picture begins by showing off its greatest asset: Andrew Prine, well-known from his appearances in Grizzly and The Evil, in the role of Simon! He emerges from his storm drain on a rainy night and tells us a little about himself, namely that he lives in the storm drain and is a practicing warlock! Quickly he’s hassled by cops and tossed in the clink for an overnight stay! In the pokey he meets Turk, a ginger-haired shorty played by George Paulsin from The Bat People! This young hustler quickly befriends Simon and facilitates his entrée into society!
The next thing you know, some pompous git passes Simon a bad cheque! Well, ha ha, it’s clearly time for black magic vengeance! The bearded warlock conjures up a swirling red optical effect, and this entity proceeds to first hypnotize the cheque kiter and then fatally dump a flowerpot on his head! In the meantime, Simon has met and, in his way, attempted to romance Linda, the D.A.’s daughter, played by Brenda Scott! Of course the D.A. himself, called Willard Rackum and played by Norman Burton from Mausoleum, is fairly unhappy about this, and makes more trouble for Simon!
All Simon wants is to complete the erotic ritual that will ensure his apotheosis and eventual godhead! It’s not much to ask, ha ha, and after Simon calculates the precise time of day - 1:33 - that he needs to enter the next realm, and after he talks endlessly about what’s he's going to do exactly at that time, and makes many careful preparations for it, he misses his moment by carelessly shooting the breeze with his moronic doper buddies Shay and Troy! Ha ha! At this point Simon bugs out and calls down curses upon the whole of West Side; and, in the spirit of curses doubling back upon their casters, this proves Simon’s undoing, at least temporarily!
Ha ha, the sort of person who spells “magic” with a K on the end of it tends to like this picture because it apparently treats warlockery with a seriousness missing in many other pictures! I myself am not so sure that it does - witness the sound effect they put in whenever the red optical effect is on the prowl, for example, not to mention the Bill Rebane quality of the optical itself - but Prine’s committed performance does indicate a fierce advocacy from at least the thespian quarter! Simon is at turns grumpy, insane, warm and friendly, homicidal, wry, and sad! His friendship with Turk, a central feature in the picture, comes to a melancholy conclusion when Simon reluctantly casts a spell to sever the friendship forever!
So there’s some interesting stuff going on in the picture, and the scenes with the malevolent red optical effect are entertaining! Ha ha, there’s a scene where Simon and Turk (who is dressed as a chauffeur for some reason) visit a Wiccan gathering, at which witches of all ages disrobe and chant and shake bums while a goat watches impassively from his altar; and the broom-breaking conflict depicted here is pretty good at demonstrating the internecine scorn to be found in the supernatural community! In fact it’s the feeling of community, both within the witchy world and among the down-and-outers, heads and hangers-on of West Side, that proves perhaps the movie’s most interesting aspect!
But the movie is also frequently dull, and it can be a bit silly too! Even so, it strikes a good tone, not too self-serious, but not willfully goofy! Warhol superstar Ultra Violet shows up at one point, playing the Wiccan priestess, and then there’s the memorable line “Don’t touch me - I’m a religious object!” Ha ha! In the end, while I can’t say I like this picture as much as many people do, and while I wish they’d gone the Night of the Demon route and included a scary monster instead of the optical effect, I’d still say it’s a solid curio that’s well worth a look! I give Simon, King of the Witches two flash floods!
Posted by Burl at 08:37