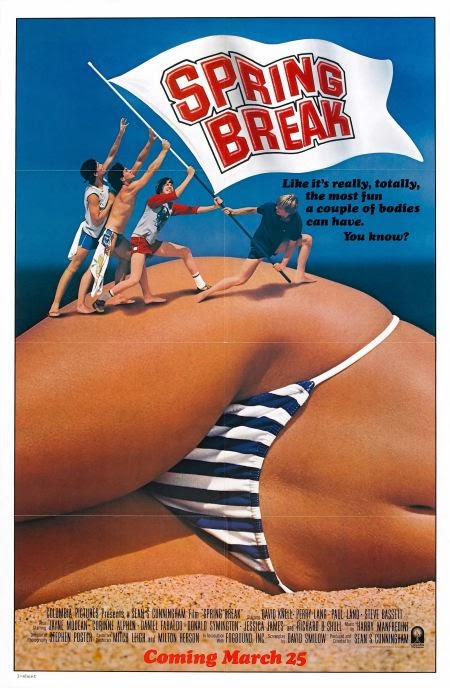 Hi, Burl here, in the company of some Lauderdale Ladies, to review for you one of the top beach pictures of the first half of 1983, Spring Break! Ha ha, like Spring Breakers, which I recently watched, this picture tells of four non-Floridians who arrive on the beaches of that strange and venerable state for the spring break week, and contains many shots of b*kini-clad ladies! But, ha ha, there the resemblance ends!
An odd thing about this picture is that it comes courtesy of Sean Cunningham, the director of Friday the 13th! It’s a remarkable change of pace, sure, but there are similarities as well, like the presence of so many young people, some dumb dialogue and unlikely situations, and of course the score by Harry Manfrancini! You can rest assured there are some screaming shock violins, ha ha!
Oh, you were hoping for a synopsis? Well, there are two nerds, Nelson and Adam, played by David Knell from Total Recall (can’t say I remember him in that, ha ha!) and Perry Lang from Teen Lust and Alligator, who arrive in Fort Lauderdale with the intention of having a good time! Nelson is on the lam from his nasty politician stepfather, played by Donald “Wolfen” Symington, so he’s a bit nervous! But it turns out the room they’ve booked has also been booked by O.T. Blastem and his pal Stu, a couple of New York sharpies! Ha ha, what a confusion!
But this is a movie on the mellow side, so the conflict is resolved with a minimum of hassle! Soon the four vacationers have formed a team, with O.T. and Stu helping their nerdly counterparts learn how to have a grand old time! There are little romances set a-brewing, and between these there are contests of various kinds, including bellyflop, teeny-bikini, banana-eating and wet T-shirt! (I’ll leave you to discover in which of these competitions a fellow named “Crazy Gut-Gut” takes part!) And the plot elements finally come to the fore when Nelson’s stepdad has his henchmen kidnap the lad and imprison him on the boat! Meanwhile the hotel, run by a kindly lady and staffed exclusively by a guy named Eesh (who was also in Fear City, which is why he looked familiar to me), is in danger of being bought out by that very same stepdad! A bit of a coincidence, but no biggie, man!
Of course, with the help of the spring break partycrew, some cream pies and a few Millers, everything works out! The hotel is saved and the stepdad’s life and career are ruined! This seems only just! Then everybody kisses and says goodbye – perhaps only until next year!
Ha ha, this is a pretty enjoyable picture in its way, and it certainly lives up to its own modest ambitions! The casting is about perfect, especially with the nerds – and I was astonished to see that one of the nerds, Adam I think, looked, walked and talked just like Bruce Allenby! Ha ha, it’s true! There are actually a few pretty good songs on the soundtrack, which was amazing (ha ha, NRBQ is always welcome!) and plenty of great 1980s stuff to look at!
I cannot, won’t and will not make a case that this is a top-flight picture, and there are probably even better 80s beach pictures out there! But when this one is right, it’s right, so I’m going to give Spring Break two and a half crazy gut-guts and a big bellyflop splash!
Posted by Burl at 10:12