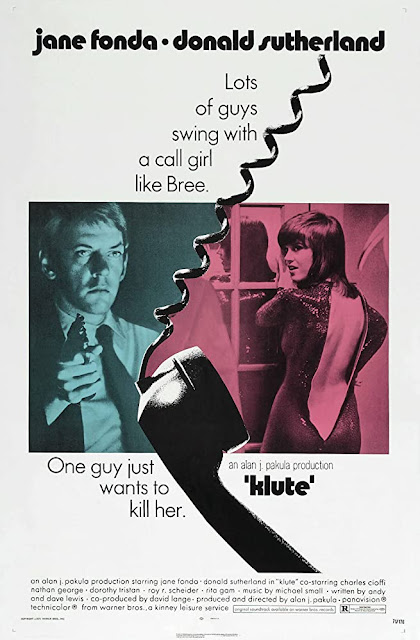 Who’s that lurking menacingly in the foreground? Ha ha, it’s Burl, as always, here to review a picture for you! This time it’s a work from Mr. Alan J. Pakula, who made a number of good movies, and this is one of them! It’s Klute, which was the first entry in Pakula’s unofficial trilogy of 70s paranoiac pictures! Ha ha!
Now, Klute is a mystery, but one of its biggest mysteries is why it’s called Klute! Ha ha, the picture’s focus is the character played by Jane Fonda of On Golden Pond fame, and her name is Bree Daniels, not Bree Klute! She’s having funny feelings, as though someone is following and spying on her, and she’s also getting strange phone calls in the night! Now one might think it unsurprising that she should receive strange phone calls in the night, for after all she’s a call girl! But she’s also an aspiring actress - ha ha, the dispiriting humiliation actors, especially female ones, must endure, is drawn very convincingly here - and much is made of the crossover between these two professions!
Meanwhile the Klute of the title, John Klute, is a neophyte private detective from the sticks, in New York on the hunt for a missing man, who also happens to be Klute’s good pal and might be the one harassing Bree! Klute is played by gawky Donald Sutherland, who, you’ll recall, played Scientist At Computer in Billion Dollar Brain, and was of course also in Heaven Help Us! Klute and Bree begin a fractious acquaintanceship, in which he repeatedly asks questions about the mysterious man who’d beaten her up two years earlier, and who may be both the missing man and the mysterious stalker!
But the focus for the most part is on Bree, who goes out on a number of jobs as well as on some auditions, and some visits to her older lady therapist! Ha ha, we see the different sorts of acting she does in each situation, and, through Fonda’s own showy but multileveled performance, we consider the concept of acting itself: as a job, a craft, a habit, a survival technique, and as a natural and constant state of being! Fonda does some capital-A Acting in this picture, but the Academy Award she won for it was well-earned! And I’ll bet her salty talk shocked the people of 1971, especially those people named Henry Fonda! Ha ha!
Sutherland is good too, as is Charles Cioffi from Remo Williams: The Adventure Begins, who plays another crucial character! There’s also a very welcome appearance from Roy Scheider, whom we know so well from Jaws and Sorcerer and The Curse of the Living Corpse, playing a slick pimp! Behind the camera we get all sorts of talent: the marvelous, dark photography of Gordon Willis; the plinking, sinister, but generally unobtrusive score by Michael Small; and controlled, considered direction from Pakula, whose second feature outing this was!
It’s a solid character study / mystery-suspense picture, though it does occasionally forget about the mystery-suspense part for longer than I would like! Ha ha, that’s just a matter of taste though, and you may feel differently! On the whole I thought Klute was a heck of a picture, and I give it three Irish accents!