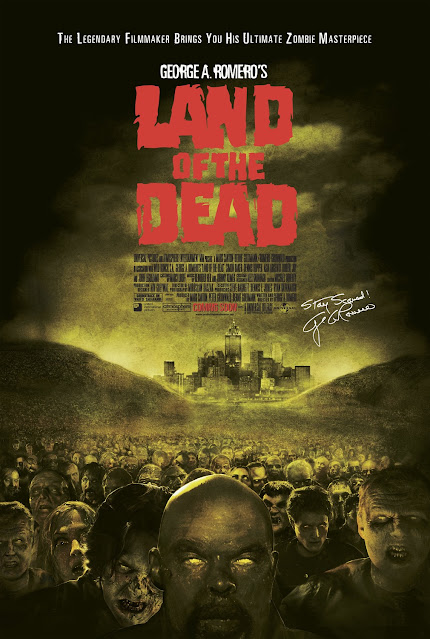 Urrgh, groww, gnarr, it’s Burl shuffling at you with a zombie movie to review! And not just any old zombie movie, but one from the acknowledged grandmaster, George A. Romero, who of course brought us Creepshow and many other horror entertainments! And Creepshow had zombies – three of them, to be precise – but it’s the …of the Dead series for which this beardsman is most thoroughly celebrated! The one under review today is the biggest-budgeted of them all: Land of the Dead!

I’m a very big fan of Night of the Living Dead and especially Dawn of the Dead – ha ha, a great favourite, that one! Then, when Day of the Dead came out, and played at the grandest movie theatre in town when I was but fourteen years old, I managed to sneak in to see it opening night, and even got myself one of the promotional badges they were handing out! It was a night of great triumph: the first time I successfully sneaked in to an R rated movie; and so Day of the Dead stands as a sentimental favourite and always will! And so, as you can imagine, when Land of the Dead came along twenty years later I was pretty excited to see it too!

So I rushed out to the movie theatre, and what I beheld there was this: a slick, enjoyably meaty zombie picture with a nicely Romeroesque political dimension to it – ha ha, in other words, almost exactly what I was hoping for! Still, it’s never ascended to the pantheon occupied by the first two in the series! It’s a lot more lighthearted than Day of the Dead, though, which, with all its yelling, is a movie that can really harsh your mellow! On the other hand, I quite enjoy the picture! But we’re here to talk about Land of the Dead, aren’t we! Yes, ha ha!

Our story once again begins some unspecified amount of time after the zombie apocalypse, and society in Pittsburgh is bifurcated between the regular folk, who live in dirty slums where they indulge in every vice and yet keep it together enough to provide the children with puppet shows, and the rich, who dwell in comfort, as though nothing had ever changed, in a big tower called Fiddler’s Green! This edifice is run by Kaufman, who’s played by an unusually reserved Dennis Hopper, an actor we recall from My Science Project and The Texas Chainsaw Massacre part 2!

Pittsburgh gets its supplies by means of night raids on nearby towns that have been overrun by zombies but still have shops full of canned goods and booze! Simon Baker from Red Planet plays Riley, the good guy who designed and is in charge of the main raiding vehicle, which they call Dead Reckoning! This conveyance, an armored truck thing reminiscent of the Landmaster from Damnation Alley, can shoot fireworks, machine guns, and mortars, and becomes the central item of interest as the movie progresses!

John Leguizamo from Die Hard 2 and Collateral Damage plays Cholo, the second-in-command who first works for Kaufman, then is snubbed by him, and so in his resentment becomes compelled to steal Dead Reckoning and threaten to shell the city with it! Riley, in the company of his old buddy Charlie, a puttyface played by Robert Joy from Amityville 3-D (and looking very much like he did in the final moments of that film), and his new friend Slack, a lady played by Asia Argento from The Church, form a repo gang who intend to get it back: not for Kaufman, whom they all dislike, but to save innocent lives in the slum zone! Meanwhile the zombies are being organized, after a fashion, by zombie liberation activist Big Daddy, a gaspumping zombie played by Eugene Clark from Trial & Error! As Riley and his bunch close in on Chulo, the zombies cross the river simply by walking across it under water, and the final battle for life, freedom, and Fiddler’s Green is under way!

The movie was released in the heart of the Bush years, in the midst of the war in Iraq, and serves pretty well as a political parable in the old Romero style! Hopper’s character is the Bush analogue of course, with Fiddler’s Green and Pittsburgh in general standing in for North America; while the zombies are the foreign hordes supposedly clamoring to destroy it or at least take it over! As political parables go it’s not subtle, and it lacks the lively cleverness of Dawn, but it’s still nice to see horror movies with subtext, even if that subtext isn’t very sub! Ha ha! And is it gory? Ha ha, you bet it is, especially in the unrated edition I just watched! You get face pullings, head stompings, all manner of grue!

The picture was shot in Toronto, not Pittsburgh, so the margins are filled with familiar Canadian actors like Earl Pastko from Roadkill, Robin Ward from Flick (supplying a mellifluous voiceover extolling the bourgeois virtues of Fiddler’s Green), Heidi von Palleske from Dead Ringers, and Boyd Banks from Crash! Of course Tom Savini, whose moustache-acting we’ll recall from movies like Creepshow 2 (where his moustache is prosthetically obscured, ha ha) and Innocent Blood, turns up in zombie form as the same biker, Mr. Machete, that he played in Dawn of the Dead!

It’s an entertaining and slick picture that suffers from thin characterizations (the hero’s defining personality trait is that he’s the hero, ha ha, and a pretty bland one at that) and is narratively underbaked! It doesn’t offer all the satisfactions I might have hoped for, but it still ticks plenty of boxes, and in spite of occasional moments of profound dumnitude, I think of the picture with fondness! I give Land of the Dead two and a half skyflowers!
Posted by Burl at 10:47