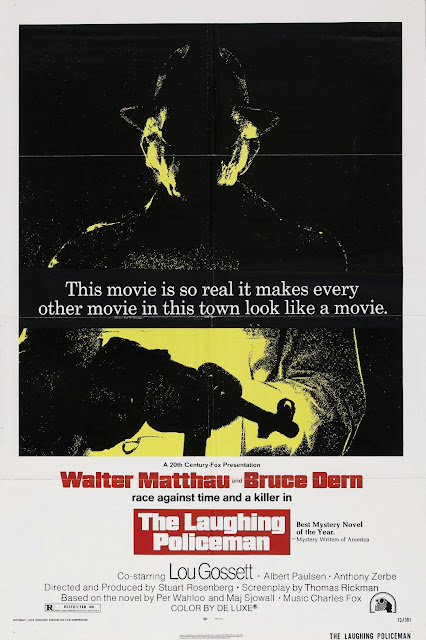 Beyond human belief, it’s Burl, here to review a tough-guy Matthau movie! “Ha ha,” I hear you say, “but Burl, how could the star of Grumpy Old Men and Grumpier Old Men ever play a tough guy?” Well, not only has Walter Matthau proved his versatility in such varied pictures as Bigger Than Life and The Bad News Bears, but you’ll be delighted to discover he had a brief period in the mid-1970s in which he seemed ready to become something close to an action hero! Ha ha, I guess these are all more crime pictures than action extravaganzas, but still, the 1973-74 one-two-three of Charley Varrick, The Laughing Policeman and The Taking of Pelham One Two Three would mark a noteworthy period in any actor’s career!

The picture begins with one fellow following another fellow for reasons we can’t fathom, and this pursuit leads to a city bus! Soon enough a mysterious passenger pulls out a machine gun and rat-a-tat-tats everyone aboard the public conveyance, including the driver, the pursuer and his quarry, and at least a half-dozen other passengers! Of course the police are soon on the scene, the most rumpled of them being Matthau; but we also have Bruce Dern from The King of Marvin Gardens and Smile, playing a younger cop who looks a little snappier but whose occasionally crude behavior rubs Matthau the wrong way! And then there’s Louis Gossett Jr. from Jaws 3-D, another detective, who doesn’t get as much to do, but who has a great tough-guy moment when he takes down an abusive pimp!

Anthony Zerbe from The Dead Zone plays their angry and excitable captain, of a type very familiar from many policiers, and by garr he wants results! Making it all the more difficult is that one of the bus victims, the fellow who’d been pursuing the other fellow, turns out to be Matthau’s partner Dave Evans, a tall drink of water played by Anthony Costello from Night Moves! Cathy Lee Crosby from The Dark is Evans’ girlfriend, but she can’t shed much light on the matter, and quite reasonably gets upset when barenaked pictures of her are found on the dead cop’s desk! Matthau and Dern do some very realistically drab detective work, in one instance hassling the denizens of a gambling establishment wherein one of the background extras is dressed exactly like Freddy Krueger! Ha ha!

Matthau’s search for the truth brings him into contact with a long, vaulted gallery of familiar faces, including Matt Clark from Buckaroo Banzai, Joanna Cassidy from Blade Runner, Gregory Sierra from The Towering Inferno, Val Avery from Cobra, Clifton James from Juggernaut, and Frances Lee McCain from Gremlins; and there’s a typically creepy lowlife role for Paul Koslo, who did the same sort of thing in Mr. Majestyk! It’s all done in a very gritty 70s way, with as much verisimilitude as they could cram in there! Ha ha, it’s the kind of movie you know employed plenty of consultants in order to keep it real!

I thought Stuart Rosenberg, an inconstant filmmaker if ever there was one, did a terrific job here! Also it looks marvelous thanks to cinematographer David M. Walsh, who went from this into a long string of mostly comedies, Neil Simon and otherwise; and there are a few rousing action scenes, like a hostage situation fairly early in the movie! Of course Matthau is typically great, getting in plenty of curmudgeon business years before the Grumpy pictures! The picture gets a bit murky near the end, I found, and though I know it must be my own fault, I couldn’t really figure out the motive for the massacre! I might have been a bit sleepy! Anyway, if The Laughing Policeman isn’t quite in the top tier of 70s thrillers, it’s sure within kissing distance! Ha ha! I give it three grease guns!