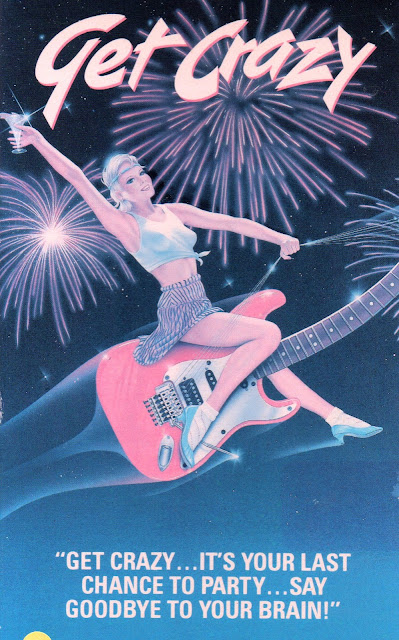 Burl talking on you! I thought today I’d review Get Crazy for you, an oddball picture that represents a microgenre I hold very dear: Low-Budget Excess! It’s part of a number of microgenres, actually: New Year’s Eve, Let’s Put On A Show, Fake Rock Songs, Movies With Unbelievable Casts, and so forth! And of course it resides in a very special genre that isn’t so micro: Movies Featuring The Great Dick "Moving Violation" Miller!
A simple plot description is pretty deceptive, because it makes the movie sound almost normal! It seems that there’s a rock palace called the Saturn, run by the irascible Allan Goorwitz-Garfield, which is about to welcome in 1983 with its annual big NYE rockshow! But there are flies in the ointment, because aside from the usual difficulties with rock star egos and technical mishaps, evil rock promoter/property developer Ed Begley Jr., in conjunction with Fabian and Bobby Sherman, is plotting to steal away the storied Saturn so he can construct a giant glass high-rise concert hall in its place!
Opposing this plan is the Saturn’s stage manager, Daniel Stern, and a young lady named Willy Loman! She’s no salesman, but is herself an experienced stage manager! Offering tacit support are the performers, which include a Muddy Waters-like bluesman; a proto Riot Grrrl band called Nada, which is sort of a cross between the Runaways and the Plasmatics; an unbelievable punk rock masochist named Piggy, played by Lee Ving, a Dylan-like folk-rocker essayed by none other than Lou Reed; and a Mick Jag*ger parody called Reggie Wanker, played by Malcolm McDowell! Phew! And on top of that there’s a host of supporting characters, including but not limited to Robert “Explorers” Picardo as an overzealous fire marshal; Halloween III’s Stacy Nelkin as the stage manager’s underage sister; Clint Howard as an usher; Jackie Joseph playing Dick Miller’s wife, just like she does in Gremlins; Paul "Piranha" Bartel as a doctor; Mary Woronov as a lighting tech; plus a space alien who dispenses mind dr*gs from a silver briefcase, and a giant ambulatory mariju*na j*int!
The movie’s rough-hewn and nonsensical, and frequently not all that funny, empirically speaking! But it’s also gosh-darn likeable, because it’s a love letter picture (yet another of it’s microgenres!), which is to say a movie made in tribute to some unheralded subset of society! In this case it’s a freewheeling paean to rock venues and their backstage personnel! And of course, like director Allan Arkush's other fine rock movie Rock 'n' Roll High School, it’s also a celebration of the power of song, ha ha!
It’ll apparently never make it to DVD or any other format because of that old cod, licensing issues! So if you ever get a chance to see this good-natured oddity, you should take it – and you may want to make friends with a giant, ambulatory marij*ana jo*nt beforehand, if you catch my drift, ha ha! Where else are you going to see Lou Reed do a comedy impersonation of Bob Dylan? I give Get Crazy three blind mourners!
Posted by Burl at 11:46