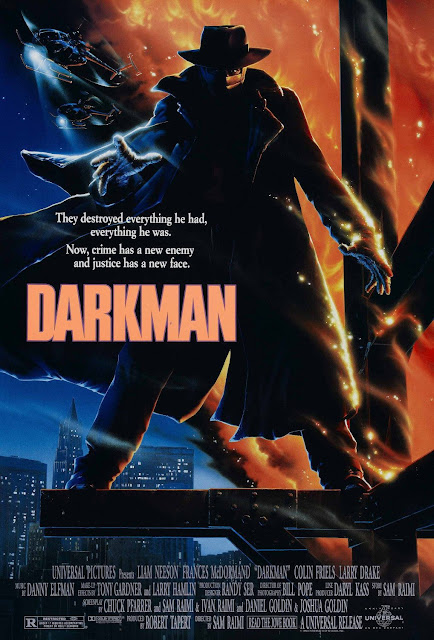 I had a good time at the movie theatre with this one, as I recall! Like Army of Darkness it’s a studio picture, but it has lots of the stylistic quirks we remember and love from pictures like Evil Dead 2 - the zooms and tilts and the weird montages and all of what have you! But you also get a cast of familiars, like Liam Neeson from Next of Kin and Taken 2 as the driven scientist looking for a way to make artificial skin, but frustrated because it always goes bloop at the end of ninety-nine minutes when exposed to the light!

Meanwhile, his lawyer girlfriend, played by Frances McDormand from Moonrise Kingdom, gets mixed up with gangsters through no fault of her own! These baddies, on the quest for an incriminating document, invade Neeson’s lab, kill his assistant, and blow him and his research sky-high! He ends up floating in the river with the complexion of a well-done coppa steak, an uncontrollable grumpy streak, and an inability to feel pain! The front-line bad guy responsible for this is Durant, played by Larry Drake of Dr. Giggles and Dark Night of the Scarecrow! He’s the sort of heavy who for some reason likes to collect the fingers of his victims, which he chops off with a cigar guillotine and keeps in a cigarette box - ha ha, presumably he takes these severed digits home and smokes them in the privacy of his den after his family has gone to bed!

Colin Friels, who returned to the dark later in Dark City, plays the bad guy behind the bad guy, dancing among the girders of a skyscraper under construction! But leading up to this is Darkman’s journey from crispy, wounded scientist to a rage-filled superhero wearing false faces as he disrupts the business affairs of the Detroit mob!  There are some fine action scenes in here, climaxing in a grand helicopter war, and several henchman expirations along the way!

All sorts of familiar faces show up in the movie’s margins, from Jenny Agutter, of An American Werewolf in London, as a heartless, pin-poking doctor, to Julius Harris from King Kong as a gravedigger, to Professor Toru Tanaka of Dead Heat as a Chinese warrior! And we get more director cameos than in a John Landis movie, including one from John Landis himself, along with William Dear, who directed Timerider, William Lustig, who directed Maniac Cop, and both Joel and Ethan Coen, who directed many fine pictures like The Hudsucker Proxy! Producers like Sean Daniel and Stuart Cornfeld also get a look in, as do Raimi cronies like Josh Becker, Scott Spiegel, and of course Bruce Campbell, who appears at the end as a Final Shemp!

There’s no wasted time in this scrappy picture, and though disbelief must frequently be suspended throughout its running time, the viewing experience is fun enough to make that effort both worthwhile and painless! Ha ha, it’s safe to say I’m a Raimi supporter, though I never have seen his baseball picture, nor his Oz sequel neither! Maybe one day! And although Darkman is not my favourite of his works, I did and do enjoy it, and so I give it a robust three dipping birds!