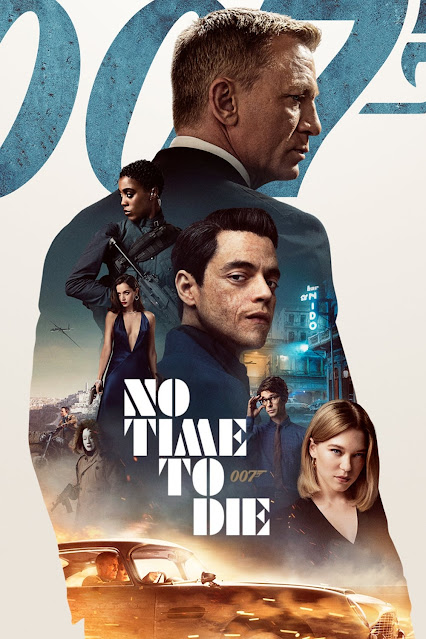 With a creak of ancient bones, it’s Burl, here to review the newest James Bond adventure featuring an actor nearly as old as Roger Moore was in his last 007 show, A View To A Kill! Of course the actor I’m talking about is Daniel Craig, well-known for providing the villain’s voice in The Adventures of Tintin, and though he is getting a bit long in the tooth - ha ha, he’s older than me, for gosh sakes! - he’s still a formidable presence and looks decent in formal wear! But it’s probably a good thing that this picture, No Time to Die, is his last outing as the double-naught spy!

In fact he’s already there as the picture begins - happily retired from the spy game, or so he thinks! Ha ha, he’s on perpetual vacation with Dr. Madeline Swann from the previous picture, Spectre, again played by Léa Seydoux from Midnight in Paris and The Grand Budapest Hotel! But an apparent betrayal ends in a car chase and a melancholy parting by train, and will Bond ever learn to love and trust again? Ha ha, persistent musical and dialogue quotes from On Her Majesty’s Secret Service strewn throughout the picture would seem to make this a doomed prospect!

Various events transpire (the picture run 163 minutes, so there’s plenty of time for events to transpire!) which lead to Bond taking up his old job again! There’s a new 007 in MI6’s employ though, a lady in fact, who might be present as a paving of the way for an all-new iteration of the superspy, but they don’t give her all that much to do, nor is she provided with the kind of charisma and hard focus that would have left us with the impression that she was taking up the mantle for future Eon productions! Oh well!

Anyway, the usual gang is still there: M, played by Ralph Fiennes from Spider and Strange Days; Ben Whishaw, the voice of Paddington, as a now less pimply Q; Jeffrey Wright from Only Lovers Left Alive as Felix Leiter; and there’s even a scene for Blofeld, still essayed by Christoph Waltz from Django Unchained! Altogether there’s the feel of a classic rock band at work, reformed in 2021 to play the old hits with some new compositions salted in for the audience to fidget to! But of course it’s the old hits everyone wants to hear, ha ha!

We get a nice scene set in Cuba with a delightful, high-kicking junior agent played by Ana de Armas from Knives Out, and also a scene at a S.P.E.C.T.R.E. party that seems borrowed from toxin-based pictures like Getting Even! Ha ha! Of course there was no end to the borrowing from Bond pictures by Getting Even, so I guess that’s fair enough! And then the whole thing wraps up on the bad guy’s private island, which is nice because we haven’t seen a bad guy with his own private island since maybe The Man with the Golden Gun! (Oh, ha ha, I’m wrong - I think the glooper-faced fellow in Skyfall had his own island, but the climax of the picture wasn’t set there!)

One distinct improvement over Spectre is that, when we get an establishing shot featuring the Tower Bridge, the River Thames, the London Eye, Big Ben and the Houses of Parliament, they no longer feel it necessary to superimpose the label “London!” Ha ha, thanks for trusting us to recognize the city on our own, filmmakers! Your faith in us is simply awe-inspiring!

The picture looks terrific, as most of the recent Bond outings have, and the action scenes, when they come, are of a reasonably thrilling calibre! There’s a good bit set at a snowy cabin at the beginning of the picture, but later, as the movie enters its third hour, there’s a feeling that the whole thing might be going on a bit too long! Then there’s an ending that I won’t get into, but that isn’t what you might call the traditional Bond ending! It does give us Louis Armstrong warble-croaking “We Have All the Time in the World,” so it’s far from a complete loss!

It tries mightily to be something more than a routine spy adventure and it halfway succeeds! The bad guy’s plan is very rote and not explained very well, and he himself is something of a wet sandwich! The tormented romance between Bond and Swann didn’t affect me in the way the filmmakers clearly hoped it would - maybe I just don’t recall the ins and outs of Spectre clearly enough for that! I went through half the picture thinking she was Blofeld’s daughter, only to realize that she was actually his psychiatrist, which, as the sometime girlfriend of her patient’s arch-enemy, must violate some little-invoked clause in the Book of Headshrinker’s Ethics! Ha ha! In any case, it was a night out at the movies, and no mistake! Since I don’t seem to have picked up any covid in the course of going to see it, I give No Time to Die two slinkys!