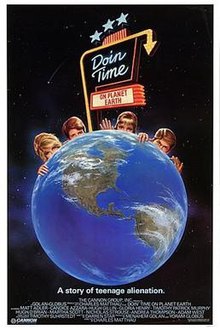 Well hello there, it’s Burl, here to review an 80s oddity for you, as I’ve done many times before! This one comes from those Golan-Globus boys, but it’s one of their more obscure efforts and an altogether kooky concoction! Believe it or not, it was directed by Walter Matthau’s son Charles, and the picture’s called Doin’ Time on Planet Earth!
I recall many years ago reading an article about this movie in a magazine called Cinemafantastique (a combination Fangoria and Starlog for the wispy-moustache set), but I nevertheless knew little about it, other than a spinning restaurant is somehow involved! Ha ha, and indeed that proved to be true! But for much of its scant running time it seems like a belated, point-missing entry in the teen science whiz subgenre, with a clever black sheep family-oddball type called Ryan who is roundly loathed or at best barely tolerated by his family!
Ryan’s dad, played by Hugh Gillin from Psycho II, runs the Holiday Inn with the spinning restaurant on top; his mom is a ghostly nonentity; his brother hates him and is about to get married (the brother’s wedding plays a bigger part here than the comparable event does in My Brother’s Wedding); and his sister, played by Paula Irvine from Phantasm II, hates him even more, in fact detests him beyond even the pathological rage of the sister in Ferris Bueller’s Day Off or the justifiable contempt of the one in Teen Lust!
Meanwhile, as in an ordinary 80s high school picture, the gormless Ryan’s main concern is Losin’ It! Ha ha, and the object of his virginal desire, a lounge singer at the revolving hotel played by Andrea Thompson from Hot Splash, returns his puppy love with the same opprobrium he receives from his family! Only a weird bus-driving couple played by Adam West from The Happy Hooker Goes Hollywood (and who I met at a car show once!) and Candice Azzara from Who Is Harry Kellerman and Why Is He Saying Those Terrible Things About Me? show Ryan any respect, and that’s because they believe him to be born of alien DNA just as they and their Heaven’s Gate-type followers are; and furthermore that he is the star navigator who will lead them back to their home planet in the spaceship that is currently disguised as a revolving Holiday Inn restaurant! Ha ha!
It’s a movie that tries to be many things at once: a high school coming-of-age comedy, an oddball comedy about feeling out of step with the world, a speculative sci-fi eccentricity! If it aspires to anything, it’s to join the ranks of Repo Man, Rubin & Ed and UFOria! But it doesn’t accomplish this to any satisfying degree, despite a few lightly amusing lines and cameos from old warhorses like Roddy McDowell from Fright Night and Heads, here playing a preacher, and Maureen Stapleton from Interiors and The Money Pit as a wacky balloon lady! Ha ha, even the big chocolate bar-munching oaf from Friday the 13th part V shows up!
None of it works terribly well thanks to inconstant direction, some dicey performances, and a script carved from real butter! The revolving restaurant is theoretically a nice touch, and to be sure it’s featured heavily, but in the end, like the narrative itself, all it does is go round and round! (I did like the band that plays the climactic wedding party though, led by a non-singer singer called Cecil Hill!) Ha ha, I watched this with my fairly uncritical eight year-old, and even he complained about the unsatisfying resolution! Doin’ Time on Planet Earth is obscure, but, while I appreciate that it’s trying something different, and its heart is in the right place, so far as I’m concerned it’s not something that requires rediscovery; so after all is said and done I give it one and a half helium inhalations!