Burl reviews Rain the Color of Red With A Little Blue In It! (2015) 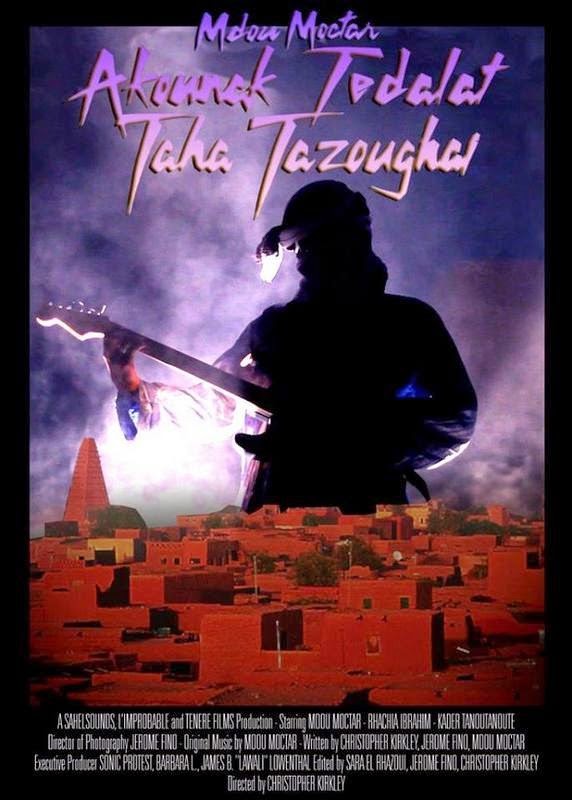 Ha ha, it’s Burl, here to review an African version of Prince’s 1984 picture Purple Rain! That’s another movie I know strictly by its Mad Magazine parody, so I was worried that I wouldn’t be getting all the enjoyment I could from Rain the Color of Red With A Little Blue In It, which is a remake of the Prince film, or a tribute anyway, shot recently in Niger!
It’s the story of Mali-born guitarist Mdou Moctar, playing himself! Mdou is almost thirty, but here I guess he’s meant to be playing a version of himself as a teenager! Ha ha, I didn’t realize it until a scene where he argues with his dad, who hates the idea of his son being a musician! And this is but one of the obstacles Mdou faces!
He’s also the new guy in town, the town in this case being Agadez, in central Niger! The local hotshot guitar player is a guy called Kader, and eventually a rivalry springs up between these two! Kader manages to steal Mdou’s new song, which Mdou had been saving specially for an upcoming Battle of the Bands being held to determine who is really the best guitarist in Agadez! In the meantime, Mdou has met a pretty girl, and is wooing her with trips into the desert riding pillion on his purple motorcycle! He almost loses this girl by acting like a jerk later on, but his music redeems him, and also solves the problems with his father! Good times, ha ha!
The story offered by Rain the Color of Red With A Little Blue In It is pretty basic, but the culture depicted within is fascinating! Ha ha, I hate to sound all anthropological, but the most valuable thing this movie offers, besides Mdou Moctar himself, is a crazy peek into the musical scene found in and around the Sahara! It’s all about trading and even listening to music by cell phone, the informal network by which Moctar became famous in the first place! “You’ve heard him on your cellphones, and now here he is in front of us!” cries the MC at whatever show or event he’s playing!
Despite the melodrama (in the truest sense) and the sometimes stilted acting or more likely because of these things, the seventy-five minute movie is consistently and thoroughly entertaining! The music is terrific, and the songs are all about peace and love! I’m not sure how closely it hews to the story of Purple Rain, but I’m pretty sure it doesn’t matter whether you’ve seen that one or not: Rain the Color of Red With A Little Blue In It is a fun and culturally fascinating picture any way you slice it! I give this musical motion picture three headscarves!
Posted by Burl at 10:16 2 comments: 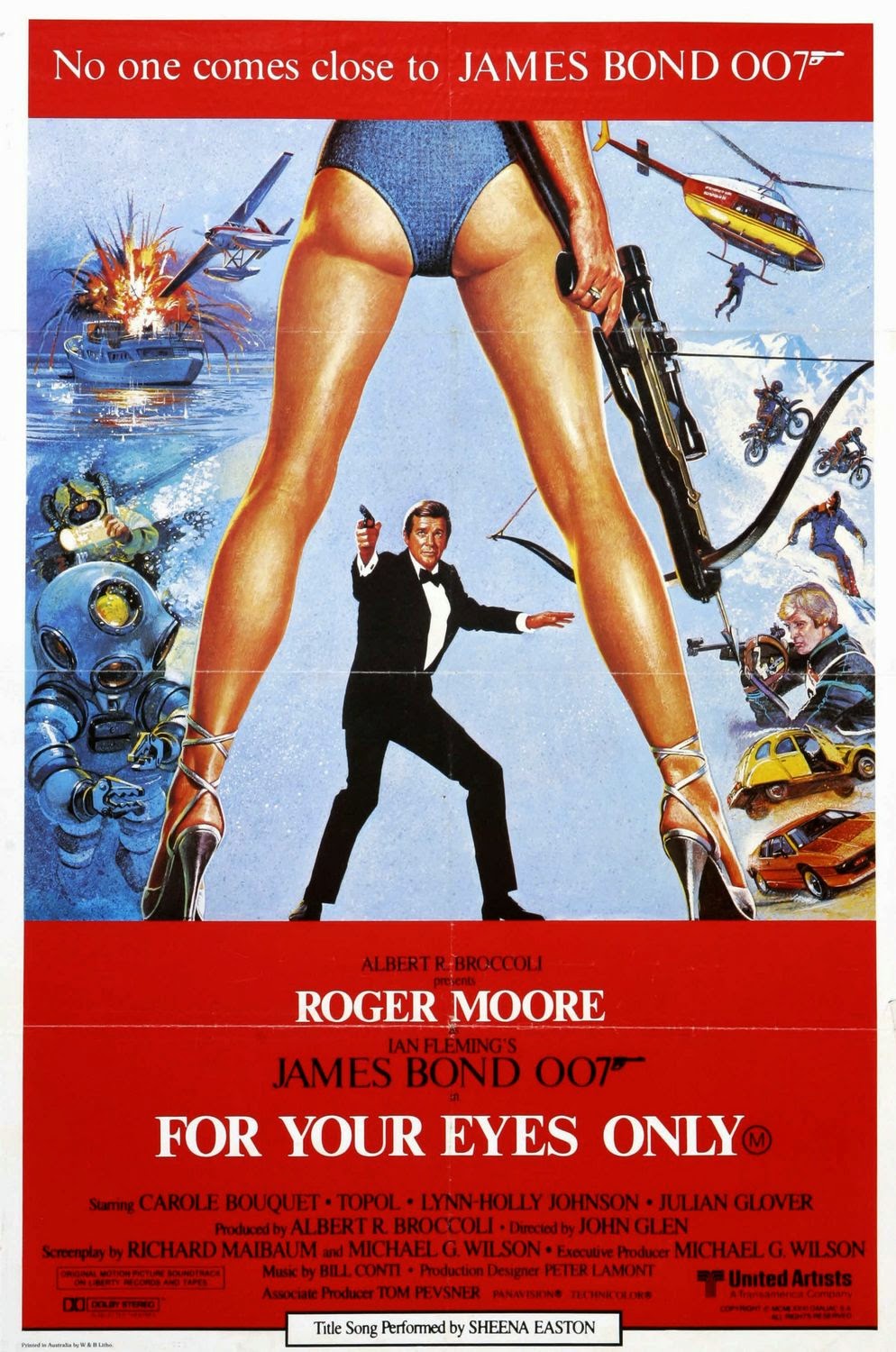 Ha ha, Burl here! It’s not a very controversial position, but Roger Moore has always been my least favourite Bond! (I’ve liked him elsewhere though, like in ffolkes! Ha ha, ffolkes!) However, his were the ones I sort of came of age with, as it were, so there’s still plenty of extratextual enjoyment for a guy like me! I’ve always thought of For Your Eyes Only as the “good” late-Moore, even though Octopussy is the one of which I am truly fondest, the Walken/Jones evil team and their blimp in A View To A Kill notwithstanding!
But it was For Your Eyes Only I recently rewatched, and though it wasn’t quite as serious-minded as I remembered, it was hardly the gagfest that was its immediate antecedent, Moonraker! I remembered it better through its Mad Magazine parody than through the movie itself! But it wasn’t a standout in any way, just one of the acceptably decent ones in the middle of the pack!
It opens with a pretty good remote-control helicopter scene, then shows us the fate of a British spy ship which pulls a mine up in its fishing nets! Ha ha, boom, and the McGarnigle of this film, The ATAC System! Everyone wants The ATAC System, and it seems that a beautiful lady’s parents are killed about it, and then she, being half Greek, is seeking vengeance as Bond is trying to beat a legion of swarthy Greek toughs and an East German supermen to the prize, The ATAC System!
Lynn Holly-Johnson from Alien Predators is a childlike figure skater who develops an old-man crush on Bond! Julian Glover from Indiana Jones and the Last Crusade is the initially friendly fellow who may be more nefarious than he appears! And Michael Gothard from Lifeforce (a picture I can’t believe I haven’t reviewed for you yet) is skulking around everywhere, wearing little glasses and causing mischief, and eventually meeting a curiously satisfying fate! And Bond’s ally in the last third of the picture is Topol, whom we know from Flash Gordon, deedle-deedle-dum, and who munches incessantly on some kind of nuts through every one of his scenes!
It’s on the whole pretty simple for a Bond movie, and unusually unambitious! But that works in its favor too – the stakes are mentioned at one point, and while they weren’t low (bad guys could use The ATAC System to shoot off the UK sub fleet’s own missiles at her own cities!) they are not worried over, or even mentioned, thereafter! It’s kind of nice, especially for this period, that the very planet itself isn’t in danger, and that whatever the case nobody was much worried about it! Ha ha!
It was John Glen’s first movie as a director, ha ha, and that must have been a bit of a trial by fire! It’s a pretty big picture to start off with, and maybe that’s why the results are a bit workaday! It’s certainly better than many of the movies, but it doesn’t take many risks either, and so its failures are not spectacular! The scene on the mountainside is pretty good, though spatially it didn’t make much sense! Well, ha ha, it’s Bond, what can you do! I guess after some thought, and taking into consideration that it never subjects us to that Southern sheriff guy, I’m going to award For Your Eyes Only one and a half yellow Citröens!
Posted by Burl at 22:17 2 comments: