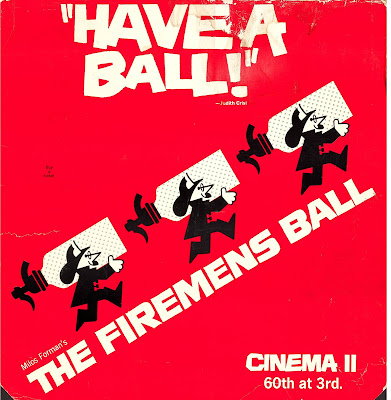 In the light of the dancing flame, it’s Burl, here to review a fine example of Czech cinema for you! Yes, I’m talking about Milos Forman’s exquisite amusement The Firemen’s Ball, which he made after rusticating in a small town and attending, yes, their fireman’s ball! He and his co-writers were inspired to put what they saw first on paper and then on film, and, ha ha, I for one am glad they did!
The picture opens with a little pre-ball vignette that displays, in microcosm, the disasters that are shortly to come! The rest of the story takes place at the ball itself (ha ha, the picture is aptly titled!) and displays the many blockheaded misadventures of the fire brigade, which is made up of variously dim, stubborn, misguided or foolish men! And what a gallery of eastern European faces is on display here! Ha ha!
The purpose of the ball is to honour an ancient and retiring member of the volunteer brigade, and to present him with a token, an ornamental axe! There’s a raffle, but the prizes, exotic foodstuffs heaped on the table at the beginning of the evening, begin to disappear - ha ha, no surprise in the environment of privation that is 1960s Czechoslovakia! Everyone in the cast - all of them non-actors - is a suspect, and in fact all of them might be guilty, but nobody would blame anybody for the pilfering either!
The film’s centerpiece is a beauty contest, or at least an attempted one; and a true catalogue of bumbling, mismanagement and dirty-old-man ogling it is! The young ladies shanghaied into participating in the goofstravaganza are a truly fascinating lot: some are pretty, some not, but all of them are compelling in their own way! And they’re a lot smarter than the old boys of the fire brigade!
By the end of the picture there’s a fire, and it turns out, to no one's surprise, these fellows are no better at dousing conflagrations than they are at holding balls! The very end of the picture I won’t detail for you, but it hits the precise note of humour, melancholy and cutting satire that it needs to! It’s one of those movies that seems to ramble while it’s on, and then in the very last shot everything is tied together tightly and beautifully! Ha ha, I love those kind of movies!
The tone of the picture is that of a more allegorical, more politicized Bill Forsyth film! As it turns out, that’s a pretty good combination! And it’s all still relevant today, ha ha! As a chronicle of the incompetence, ignorance and venality of authority that ends in shameless pilfering and avoidable tragedy, it all seems very applicable to the current goings-on down in Yankee Doodle land! Ha ha, but the movie is at the same time very funny, and I recommend it with a hearty ha ha! I give The Firemen’s Ball three and a half head cheeses!