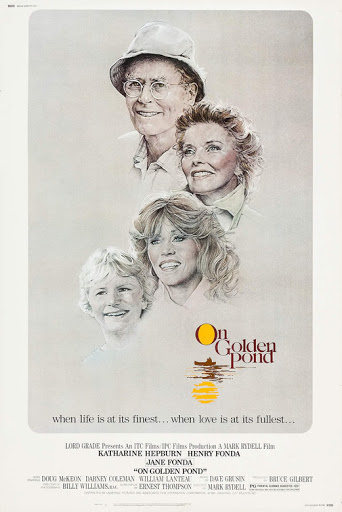 With a geriatric halloo, it’s Burl, here to review the movie about old folks! Ha ha, of course there are other movies about the elderlies and their shenanigans: surely you remember the twin triumphs of Grumpy Old Men and Grumpier Old Men! But if you want to go back a little further, but not so far back as, say, Make Way For Tomorrow or one of Ozu’s oldpeople films, you might want to settle on today’s picture: the exercise in lakeside gentility that is On Golden Pond!
Our main characters are a couple of greyhairs making a springtime return to their cottage on the lake, which is very definitely a lake and not a pond, it should be noted! Of course these geezers are played by Henry Fonda from Once Upon A Time in the West and Tentacles, and Katherine Hepburn from The African Queen! Ha ha, it’s their forty-eighth summer On Golden Pond (or “OGP” as the kids would say), and as they arrive we are treated to some character-establishing moments: Fonda, as old Norman Thayer, is crotchety and forgetful and kind of a jerk a lot of the time, and Hepburn’s Ethel wears bonnets, brings in firewood, and picks mushrooms and berries at every opportunity!
A sort of plot asserts itself when their daughter Chelsea, played by Fonda’s real daughter Jane, whom we may recall from Klute, arrives OGP with her new boyfriend and his son in tow! The youngster, who at first shows all the signs of being an irredeemable rascal, is played by Doug McKeon from Mischief, and the boyfriend is none other than a bearded Dabney Coleman from pictures like Rolling Thunder and Cloak & Dagger and Dragnet! Ha ha, it sure is funny to see Fonda and Coleman spending affectionate times together after all their troubles in 9 to 5!
But soon enough Coleman and the younger Fonda have decamped for all the capitols of Europe, leaving the boy to rusticate OGP with the elders! Thankfully the lad, for all his talk of cruising chicks and sucking face, is not the unpleasant imp one initially fears! Outside of a few moments in which he declares himself bored, or castigates old Norman for being too crabby, he’s fairly pleasant company for the superannuated duo! Ha ha, pretty soon they’re fishing together for the monster trout Walter, and crashing boats in Purgatory Cove! Ha ha, the shot of old Fonda flying out of the front of the boat is tragically funny, even though it breaks the heart to see that beautiful Chris Craft get smashed against a rock!
But there are no truly serious consequences OGP! Everyone stays friends, and then when Jane returns she and her father have it out about him being an emotionally unavailable grump, and of course one searches the faces of both actors for the helping of reality we know is present in these exchanges! It’s all quite stagy, though Mark Rydell, the director, does his best to get people outdoors and fishing or swimming or just boating around! It’s all shot very nicely by Billy Williams, a talented lensman; and composer Dave Grusin thankfully concentrates on tinkly pianos instead of the elevator jazz in which he too often trades!
So everything’s A-OK OGP! As a movie, though, it’s well-crafted but treacly, and bougie and bland! I think Henry Fonda’s performance is pretty darn good, though, and everyone else is fine enough too! It’s crafted and stogy and exactly what you think it is, ha ha, and so I give On Golden Pond two games of Parcheesi!