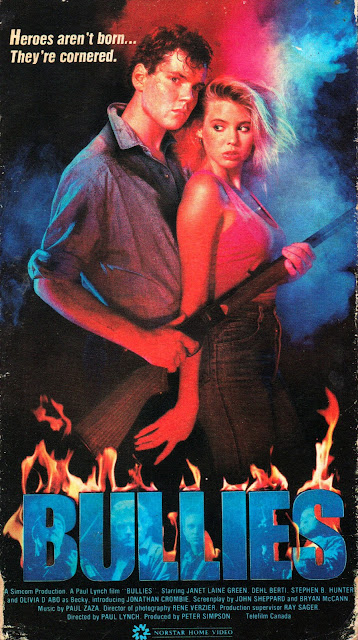 Biff bang boom it’s Burl, ha ha! I’ve got a review of a vengeance picture for you – and not just any vengeance, but, as in the delightful Rolling Vengeance, the vengeance we’re talking about here is purely Canadian vengeance! The picture is called Bullies, and whatever other faults it may possess, faulty advertising is not one of them, for the movie certainly contains no shortage of bullies! And nobody likes bullies, ha ha!
The bullies are a family of louts called the Cullens, who lord it over the other denizens of their small British Columbia ski resort town! They’re both rich and violent, though neither condition is properly explained! At the beginning of the picture, they use their big truck to run an elderly couple right off the road, and some time later, a city family who were related to the old couple (but don’t realize they were murdered) come to take over their shop and house!
The city family has problems of their own even before they arrive in this benighted hamlet! The mom has a teenage son, but has divorced his father and remarried a rather milquetoast individual! The stepdad and the son don’t really get along, and after the nasty Cullen family begin their campaign of cityfolk intimidation the gulf widens further, since the son believes his stepdad to simply be a wimp!
Naturally the son befriends a Wise Old Indian, and I thought for sure this character would either be killed or reappear at a critical moment in the climax! I don’t want to spoil anything for you, but it turns out that neither happens – the Cullens burn up his totem poles and administer a savage punchdown, and he beats feet like any normal human would! I also thought maybe the craven townsfolk would rise up and help, but they don’t!
But you know who does help out, strangely enough? Thick Wilson! Ha ha, that’s right, the co-star of Sex With the Stars and Strange Brew appears as the town sheriff! He doesn’t want anything to do with policing the Cullens until the end of the picture, when he decides to heroically take a stand for about thirty seconds before they blast him to kingdom come! Ha ha, I’ll tell you, I sure wasn’t expecting Thick Wilson to appear! Plenty of other people maybe, but not Thick Wilson!
Anyway, the Cullens get really nasty before the movie’s over, stooping so low as to perform a rape on the mom! I really dislike those sorts of scenes in movies, but here at least it’s filmed as tastefully as it could be! Still pretty unsavory, though! That’s enough for the son, and he goes on a vengeance hunt, giving the Cullens a taste of their own nasty medicine! And the stepdad, who has been captured, helps out, proving he’s not the wimp everyone thought he was!
Ha ha, this is a violent picture, to be sure! There’s a nasty burnup, an impalement and some pokings! Naturally popguns come into play as well! But this is only the last part of the picture; the first hour or so is mainly a lot of chatter set against the mountains of B.C.! Paul “Humongous” Lynch, the director, is not as good at this sort of thing as his contemporary and countryman, William Fruet, who made a Canadian Vengeance picture called Baker County U.S.A.! (He also made Spasms, ha ha!) Nevertheless, Bullies is a little better than you might expect it to be, and the vengeance itself is pretty satisfying! I give it two hood antler racks!
Posted by Burl at 22:52