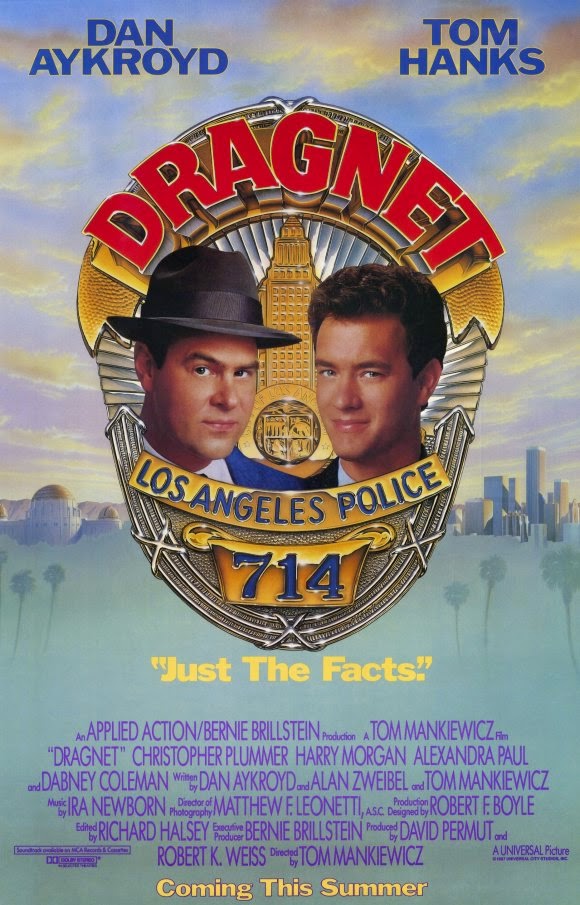 Ha ha, hello ma’am, it’s Burl! I’ve just watched that movie version of Dragnet, and I’m here to tell you all about it, though be warned: along with the just the facts, a few opinions will be mixed in!
This was a (very) minor favourite among my pals and I back when it was a newer picture! None of us had seen the show, either in its early or late 60s variants, so all we really took away from this was the sheepskin dance and The Virgin Connie Swail! Ha ha, we sure laughed at that Vi*gin Connie Swail business, and I remember it particularly tickled the funnybone of my friend D. Davey B.!
I’ll back up and give you some idea of the plot! First we have Dan Aykroyd, from Ghostbusters and The Great Outdoors, perfectly cast as the nephew of Jack Webb’s Joe Friday! This Friday, also named Joe, is a humourless, rulebook-brandishing scold, so naturally is teamed up 1980s style with a character meant to be his complete opposite, in this case a casual slackster called Pep Streebeck! Ha ha, Pep! Anyway, Pep is played by Tom Hanks, famous from his appearance in The Money Pit, and while you might be expecting the slobby Hanks from Bachelor Party, the better to contrast Friday and his brush cut, we actually get something more like the regular-guy Hanks from Turner & Hooch and He Knows You’re Alone!
It seems Los Angeles is being plagued by a series of extralegal outrages committed by an organization called P.A.G.A.N., which leaves business cards at the scenes of its crimes! It quickly becomes clear that a nasty reverend and a corrupt lady police commissioner are behind it all, though to what actual end I never was sure! The reverend is played with lots of goony laughing by Christopher Plummer, every bit as evil here as he was in The Silent Partner and Dreamscape, and Elizabeth Ashley, older, wiser and less n*ked than she was in Paperback Hero, is the police comissioner!
Mixed in with this gang is a lisping Hugh Hefner clone super-hammed by Dabney Coleman from Rolling Thunder and Cloak & Dagger; a hulking henchman named Muzz; the grumpy police chief, played by Colonel Potter of course; a foul-tongued landlady played by Kathleen Freeman from The Malibu Bikini Shop; a granny played by Lenka Peterson, who was Homer’s mom in Homer; and of course The Virgin Connie Swail, an ingénue role essayed by Alexandra Paul from Christine!
Of all these actors it is Aykroyd who stands head and shoulders above the rest, with his high-and-tight and clipped delivery! Ha ha, he’s genuinely funny, and though the act seems like it should get old quickly, Aykroyd keeps it fun all the way through! The rest of the picture, while amusing, can’t quite live up to the standard he sets!
The plot mistakes incomprehensibility for purposeful goofitry, and the visual style is so basic as to be drabber than the TV show it’s based on! Ha ha! It tries to be exciting at times, as with the climactic shootout, which plays like the end of Beverly Hills Cop if nobody actually got hit by any bullets; but there it fails! So, as a piece of cinema, I find Dragnet wanting!
But as a mindless 80s amusement it offers a comfortable, ephemeral enjoyment! And I do have to report that I had a good time watching it, so with that in mind, and also its flaws, I award Dragnet two flailing sheepskins!
Posted by Burl at 15:48