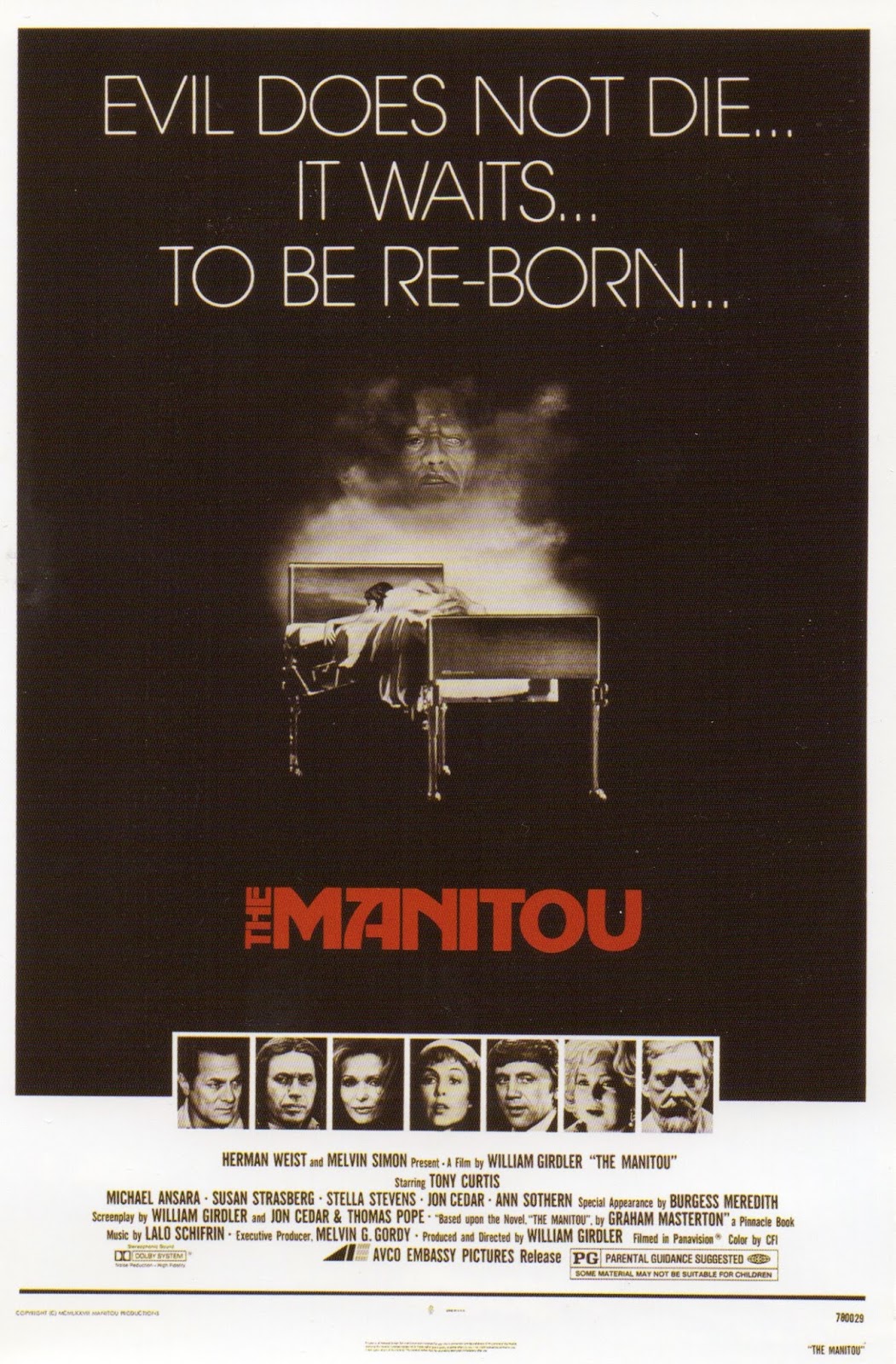 Paloon fitchy boogaloo, it’s Burl! Ha ha, just what does that crazy nonsense mean, you might be asking! Well, it means that old Burl recently watched The Manitou again, and I’ll tell you this, ha ha: I think it might be the movie which contains the most mumbo-jumbo I’ve ever heard in one single picture!
It’s a crazy one all right! Of course, as we all know it was the last movie made by the young William Girdler, who’d already directed eight or nine pictures before this, and he was only thirty! But sadly he died in a helicopter crash a few months before The Manitou was released in the spring of 1978, and we never got to see what kind of crazy movies he would make thereafter!
Now, The Manitou is a real pixystick, and I’ll try to illustrate why! We meet poor Karen Tandy, who is played by Susan “The Trip” Strasberg, and who is not the CEO of Radio Shack but in fact a San Francisco lady with a problem! She’s got a massive fleshee on her back, and it’s growing! The fleshee baffles all the doctors in the high rise hospital, and it’s up to Karen’s ex-b*yfriend, a fake mystic named Harry played by Tony “Brainwaves” Curtis, to persuade the medicos that in fact the fleshee is no ordinary fleshee, but the corporal figure of an ancient medicine man incarnating itself in Susan’s thoracic region! Ha ha!
Well, pretty soon John Singing Rock, in his own words “just a South Dakota Indian with a bag of tricks,” is brought in to help! John Singing Rock resists Harry’s appeal at first, but pretty soon, between Harry, John and Karen’s specialist, we have a Jaws-like (or Grizzly-like if you prefer, considering the director) motley male trio on the track of Mister Maquas, the medicine man, who’s as primal a force as any shark or bear! And pretty soon, who comes a-knockin’ from inside that fleshee: yes, despite all the powdered barriers and shaking of bones, Mister Maquas pops out, grimacing, and he’s a real nasty little spud too!
Ha ha, with a set up like this who would have predicted the tenth floor of the hospital transformed into the ice planet Hoth, with one room becoming a portal to the limitless reaches of space, and exploding doctors and frozen nurses, and and a t*pless lady on a floating hospital bed shooting lasers from her hands at the three-lobed burning eye of infinite evil! Ha ha!
So it’s crazy and deeply silly, but also almost as entertaining as it sounds! A scene early in the picture involving Harry and one of his clients, an old lady who becomes suddenly possessed, shouts “Panaa Witchy Salatuu!” and floats down the hall to tumble down the stairs, seems an untoppable highlight of hilarity, but the whole last act blobs down all over it like a blancmange! Ha ha, just about everybody in the picture says “Panaa Witchy Salatuu” at least once, and it probably should have been the tag line on the movie poster!
There are a few familiar faces in the supporting cast, like Burgess “Grumpy Old Men” Meredith as a grumpy old man, and Stella “The Mad Room” Stevens as a mystic! There are lots of old ladies too, in the first half of the movie anyway, and these are played by the likes of Ann Sothern, Lurene Tuttle and Jeanette Nolan! And in the role of Mister Maquas we get two diminutive performers, Felix Silla (who played creatures of some kind in The Brood, Demon Seed, House and many others), and Joe Gieb, who was in Weird Science as a blob operator!
In the end, as I’ve done so many times, the bottom line really amounts to “This is a terrible movie! Ha ha, go see it!” It’s just amazingly silly and derivative, but you won’t easily find a more 1970s horror experience anywhere else! It was also Girdler’s final work, and even though it was certainly not intended as such, that seems to imbue it with certain meaning or import! So have a look, ha ha! I give The Manitou two and a half exploding typewriters!
Posted by Burl at 00:12