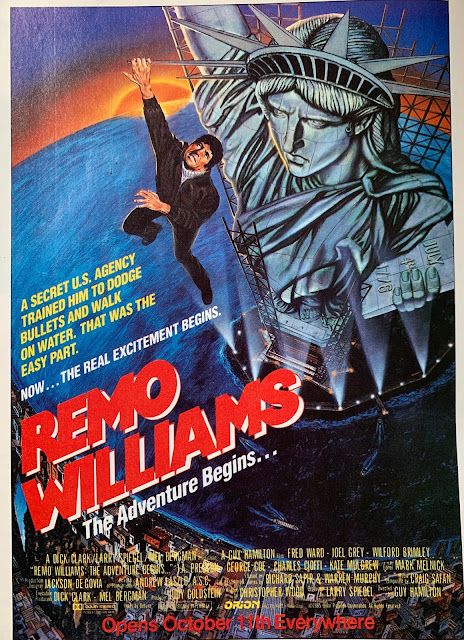 Sweet Johnny-on-a-junk-sheet, it’s Burl, already back and here to review mid-80s action! Ha ha, here’s a movie I saw in the theatre, back in the days when I used to bus on downtown and catch anything that looked the least bit interesting to my teenage self: mid-budget bunberries like Black Moon Rising, F/X, Dreamscape, or this one, Remo Williams: The Adventure Begins…!
And guess who directed it? Ha ha, that’s right, Guy Hamilton! It seems to be all Hamilton all the time around here, and the fellow didn’t even direct all that many pictures! This was one of the last movies he made, and I suppose he got the gig because of his Bond experience, seeing as how Remo Williams was an attempt to create a blue collar, meat-and-potatoes all-American version of the superspy! Ha ha, and from the fact that they made only one Remo Williams picture, you can guess how it turned out! Performed Below Expectations, as they say in Hollywood, or at least as they used to say back when there were expectations!
Fred Ward, that busy actor from Escape From Alcatraz, The Right Stuff, Secret Admirer, UFOria and of course Summer Catch, was the slightly unlikely choice to portray this rough-edged hero! He starts out as a New York cop with a false nose and a black moustache, courtesy I suppose of Special Makeup Effects man Carl Fullerton, whose work we know from Friday the 13th part 2! This cop is dumped into the East River, kidnapped and has his face changed by plastic surgery, all by a secret agency headed by none other than Wilford Brimley from The Thing, Death Valley and High Road to China! (Ha ha, of all these outrages, the plastic surgery is the one Remo minds the least!) Then he gets trained in the ancient art of a made-up martial technique by an even more heavily made-up Joel Grey, whom we know from Kafka and who plays the role of the Korean chopsman Chiun! Yes, that’s right, we have a white actor playing a Korean, because I suppose there were simply no Korean actors who could be hired! I’m sure they looked their hardest, but the fact that there were simply no Asian actors to be found in the mid-80s stymied even their best efforts!
Of course I’m being bitterly sarcastic here! Grey does a fine job in the part, and the makeup is well-done, but the fact that he’s just some white guy playing an old Korean is a constant, puzzling distraction, and I remember being puzzled by it even back in 1985! At least the only other agent in Brimley’s super-secret three-person organization is played by a genuine actor of colour, namely J.A. Preston from Real Life!
Much of the picture is given over to the training and the odd-couple relationship between Remo and Chiun, and eating rice and crawling through sand piles like a mole and so forth, but we get occasional shots of Brimley sitting in the office he never leaves and squinting concernedly at his computer screen, which shows shots of the picture’s bad guy, an arms manufacturer played by cold-eyed Charles Cioffi from Klute, whom Remo will eventually get around to fighting! Others on the bad guy team include crooked general George Coe from Best Seller; a grinning, diamond-toothed henchman played by Patrick Kilpatrick from Death Warrant; and stalwart Michael Pataki from The Bat People and Graduation Day!
The only female presence in the picture is army lady Kate Mulgrew from Star Trek: Nemesis, who discovers discrepancies of some kind, and is constantly fending off sexist comments and ham-handed pick-up attempts! She doesn’t get a whole lot to do, however, and it’s left to the dubious charisma of Remo himself to carry the picture! You’d think maybe the action scenes would help matters, but they’re either very darkly shot, as in a long warehouse-based dog-evasion scene; or curiously pep-free, as when Remo spends the entire climax hanging from a suspended tree! If there’s an action centerpiece to the picture, it’s the scene on the Statue of Liberty, which they made a big deal of in the movie’s promotion, as you can see, but which is only a moderately satisfying sequence!
So the picture was not a success, and the beginning of Remo’s adventure was also the end (outside of a TV movie or two)! There are compensations: a few funny lines here and there, some impressive physical feats from Ward, and a parade of familiar faces in the margins, like Reginald VelJohnson from Die Hard, Jon Polito from Highlander and William Hickey from The Sentinel! But for the most part it’s a simple, flat bafaloukas, and I give Remo Williams: The Adventure Begins… one bowl of rice!