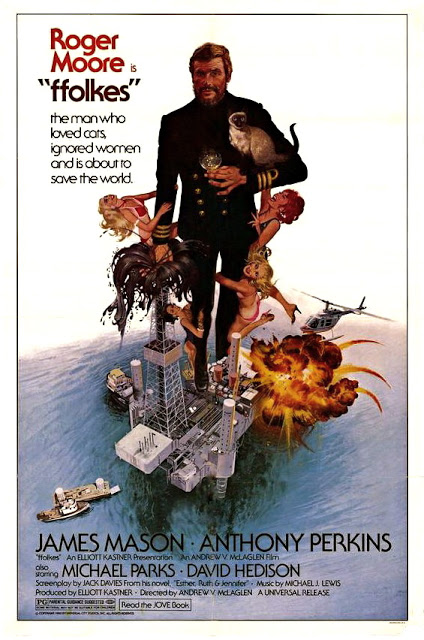 Hello ffolks, it’s your ffriend Burl here to review a new ffilm! Ha ha, no, I haven’t suddenly turned Welsh: in fact I’m using this excess of Fs to celebrate the picture I’ve chosen to review today, the logy late-70s adventure film ffolkes!
A bearded Roger Moore, the old Moonraker himself, plays ffolkes, an unreconstructed eccentric who lives in a Scottish castle and has a small gang he’s training to become crack underwater commandos! His training methods involve a lot of shouting and grenade tossing, and then later making his squad line up so he can upbraid them all again! Ha ha, they seem to be training for one specific situation - the precise situation that unfolds as the picture progresses!
That situation begins in the North Sea when an oil platform supply ship is taken over by a nefarious gang led by Anthony Perkins, whom we know not just from Psycho, but from other films too, like Psycho II! The gang rough up the crew and show that they plan on offering no mercy at all: the plot is to have the supply ship, the Esther, chug to a drilling rig called Ruth, and thence to a massive refining platform called Jennifer; each of these ladies of the sea will be strapped with high explosives rigged by Perkins’s grinning second-in-command, possibly lover, and bomb expert, who guffaws at all of Perkins’ mean-spirited comments and puts pointless little labels on his bomb control panel, and is played by Michael Parks! The explosives are attached to the structures by two Japanese frogmen who hardly say anything in the whole movie, ha ha!
Luckily, as noted, ffolkes and his men have been training for just such an eventuality, so, though it seems to take a long while, the commandos are eventually brought out to the middle of the sea! While we wait for them, we spend time with the captured crew of the Esther, led by Captain Olafson (played by Jack Watson from Tower of Evil with a Swedish Chef accent that Perkins makes fun of), and who do their best to foil the hijackers’ plans; and we also meet some of the drilling rig personnel, including platform boss Al “David” Hedison, who already knew Moore from the time he played Felix Leiter in Live and Let Die!
So there’s not a whole lot of action, but there are some fairly suspenseful sequences, especially toward the end! Moore’s character is something of a jerk and a snob, not to mention a raging misogynist, but he’s usually right about things related to underwater commando-ism, and so he gets the job done! Perkins does the Gary Oldman thing of speaking reasonably and then suddenly shouting to frighten and intimidate his victims! And don’t forget James Mason, whom we know so well from Bigger Than Life and ‘Salem’s Lot, and who is always a welcome presence and is here playing some sort of braid-bedecked admiral! His one task is to drop some cigarettes, ha ha, and he pulls it off nicely!
This was a TV mainstay in my youth - ha ha, it always seemed to be on! Watching it again recently revealed a stolid, fairly entertaining and frankly old fashioned adventure! I wish Perkins had been given more to do, as he’s quite good here; and I wish he and Moore had more scenes together; and I wish the climax was more exciting! But it’s not a bad picture in the end, and I give ffolkes two carafes of poisoned coffee!