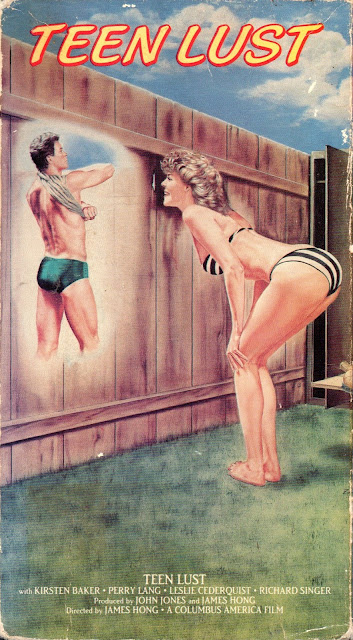 Ha ha, it’s Burl here, reviewing a movie with a great title: Teen Lust! That’s what it was called on my video box at any rate; when it was originally released, it carried the title High School Teasers! Either one will do for a movie like this, really, ha ha!
Carol, our protagonist (played by Kristin “Friday the 13th part 2” Baker, ha ha) has a perfidious boyfriend, Terry (Perry “Alligator” Lang, ha ha, who was also of course in Spring Break), and a devil-may-care best friend named Neeley! She also has a monstrously dysfunctional family, with a simpering drunkard for a mother, a leering letch of a father and a proto-slacker brother who wears a housecoat all day! Carol and Neely have joined some kind of police work-experience program, which means they spend their days detailed to a pair of busy-fingered cops! This pleases neither Terry, nor Neely’s boyfriend Hotrod, nor the creepy “Give Daddy a kiss!” father, nor the dyspeptic mother! The latter plans to marry Carol off to Dustin, the trust-fund slowbones next door!
Whew! Enough plot already; time to hit the beach! No such luck, though! First, to please her mother, Carol must attend Dustin’s birthday party (“Why would you want to celebrate the birth of a moron?” asks Dad), which is predictably a disaster! Then it’s time for a confrontation with comedy-drunk Mom, which Carol treats as a scene from an After School Special (“You’re tearing me apart!” is her climactic cri-de-coeur of course) and the mother slurs her way through as though Lucy has accidentally gotten into the vanilla again! It all ends in hugs, violin music and Mom’s surreptitious swigs on a giant wine bottle!
There are a more antics to come! In a bog-standard teen sex scene, the boyfriends dress up as girls to sneak in past the parents for an erotic pyjama party, coyly flirting with Dad on the way up the stairs! But Carol is too preoccupied by Terry’s hound-dogging ways with the local floozy, De De, to make the most of the opportunity, and before much happens the maniacal WWII veteran father chases the boys out a window! There are a few scenes ripped straight from the Van Nuys Blvd. playbook – a hard-case cop busts a hot-rodder for having open pipes and then ends up handcuffed in his underwear! Later still, there’s a very odd scene in which Carol and Terry, having made up, are attacked by a gang of ten year-olds, who destroy Terry’s car then chase Carol across a field and rip off her clothes!
It gets even weirder! Carol has another confrontation with her mother after discovering the randy, sailor-capped plumber (played by the great George “Buck” Flower, of The Fog) getting a little too involved with the family plumbing, ha ha! Mom explains that the plumber is really her lover, and moreover has been for years; Dad, his lascivious behaviour notwithstanding, is impotent and is in fact a virgin; brother Ted is most likely the plumber’s son, and Carol herself was adopted! We then rush into a scene of the devastated Carol strolling with a priest and describing not her family problems, but her nightly dreams of being raped by “all different people, not just men!” In turn, the priest confesses that he himself is “sweet,” and asserts that love is the most important thing of all! “All Hitler really needed was a hug,” the priest tells her! “Not that he was my type, ha ha!”
Domestic events come to a head as Dad falls down the stairs, the angry plumber tries to attack him with a pipe wrench, and Carol discovers that her real mother is a black masseuse named Lena! Then there’s a pie fight, and Carol almost marries the basket-case Dustin while showing signs of having inherited her adoptive mother’s taste for booze! The wedding becomes yet another crazy melee, and, in a nod to The Graduate, Carol drives off with a different beau – not Terry, but one of the cops – as the families jump around in the background! Nobody ever does make it to the beach, ha ha!
It goes without saying that Teen Lust is a strange bird! With all the crazy domestic trauma it seems as though the movie might have been meant as a parody of the After School Special genre; though, if so, nobody told the actress playing Carol! I don’t know what they told her, frankly! I would like to point out that the picture was directed by James Hong, the actor who played Hannibal Chew in Blade Runner and David Lo Pan in Big Trouble In Little China! Ha ha, that’s weird too! I’m going to give Teen Lust two Neelies!
Posted by Burl at 13:37