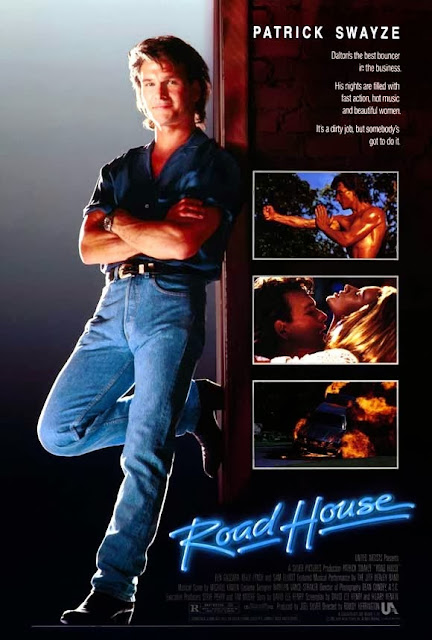 With a hootin’ and a hollerin’, it’s Burl! Haw haw, I’m here to review a much-beloved camp item, the two-fisted Swayze picture Road House! It’s a picture full of honky-tonk punch-ups and redneck romance, and there’s no shortage of Jeff Healey tunes on the soundtrack! Ha ha, in short, it's entirely the sort of picture you'd expect would be made by a guy named "Rowdy!"
Investment in the picture depends on accepting the premise that there are famous bouncers who travel from bar to bar like blue-jeaned superheroes, cleanin’ up the joints and then moseyin’ on to the next one! Dalton, played by Grandview U.S.A.’s own Patrick Swayze, is one such individual, and when he’s invited to a small town just outside Kansas City (though the landscape looks pretty California to me, ha ha!) to clean up the dusty ol’ Double Deuce, he takes the assignment on with tai-chi stoicism!
Well, he makes a lot of enemies, and quickly attracts the attention of both local kingpin “Brad Wesley” and a lady sawbones known only as Doc! Of course Ben Gazzara plays “Brad Wesley,” and, to borrow a phrase from another movie reviewer, if you place an overripe ham beside your television as you watch the movie, you’d swear it was shot in Smell-O-Vision!
Everything you expect to happen in the picture happens: a series of battles with “Brad Wesley’s” henchmen in which everyone involved takes superhuman levels of punishment; a romance with Doc that equally tests credibility; the arrival of Dalton’s shaggy friend and mentor Sam Elliott; another tune from the blind guitarist Healey and then another and another; the belated rebellion of the local businessmen “Brad Wesley” had theretofore kept under his thumb; and the final bloody battle at “Brad Wesley’s” mansion!
Ha ha, there’s a lot of goofology along the way, right up to and including “Brad Wesley’s” final demise, in which he’s blasted repeatedly with shotguns but doesn’t fall down for the longest time! Then, when the cops show up and ask for an explanation of all the dead bodies lying around, everybody shrugs and says “Ha ha, I didn’t see nothin’!” It’s a mostly enjoyable goofology, because as it plays out you can see how earnestly the picture is working to deliver the goods expected of it!
But there’s plenty of disappointment along the way too! Sam Elliott, well known from Frogs and Fatal Beauty, is an enjoyable presence while he’s on screen, but he’s not on screen enough! Even worse is the fact that Keith David is hired on as a new bartender at one point, and then doesn’t get to do anything at all except serve drinks! Ha ha, anyone who’s seen him in The Thing or They Live knows Keith David is capable of delightful tough-guy antics, but he’s kept on an inexplicably short leash here! At 114 minutes the movie is overlong, and the stuff that should have been cut out and replaced with Keith David kicking ass is extremely apparent!
But even though “Brad Wesley” has a silly name that everybody keeps saying over and over again (and maybe I just think it’s silly because an annoying dog named Wesley lives down the street from me, and I constantly hear his owners screeching that name), he makes a pretty good heavy, mainly because he’s such a bizarrely banal one! He’s just a normal, wealthy guy who apparently decided one day to act like a supervillain out of a Bond picture! Ha ha, he’s got a little group of maybe six or seven guys to back up his reign of terror, and he also owns a monster truck and isn’t afraid to use it!
The picture has a kooky script, a glossy look courtesy of portly cinematographer Dean “Halloween III” Cundey, an unexpectedly solid performance from Jeff Healy, a bit of tomato paste, equal-opportunity barenakedness and several scenes in which Swayze does The Claw! It all adds up to a brainless good time at the movies, but one that could have been a much, much better bad movie than it is! I’m going to give Road House two car dealership showrooms that display early-80s autos ready for crushing by a monster truck!
Posted by Burl at 12:27