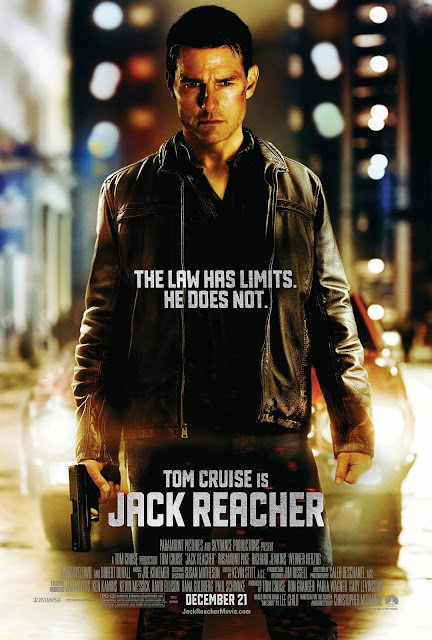 Ha ha, Burl here to review a real throwback! Or at least it seemed like a throwback to me as I watched! Ha ha, I think it wanted to be a Parallax View for the new millennium, but it turned out more like one of those bloodless thrillers of the 80s and 90s, like Suspect or True Believer or Murder By Numbers! The picture was called Jack Reacher, and you’ll have to bear with me if I get some of the plot details wrong – ha ha, I watched it a few months ago while flying on a plane!
It tried to be tough and cool and hard-edged, and with Werner Herzog playing the bad guy, I thought it might have a chance at succeeding! But it’s just another action thriller, and, ha ha, not a terribly thrilling one at that! Tom Cruise plays some kind of ex-military investigation man who now leads a transient existence in which he apparently rambles down the highways and byways of America like some kind of modern-day Shazam!
Meanwhile, in some city somewhere, a sniper shoots up a bunch of strangers, and while this would hardly seem an odd occurrence in the United States, the patsy accused of the crime calls for Jack Reacher from his hospital bed, and as though by magic, Jack Reacher appears! After that it’s a matter of finding the real culprit, exposing the truth and dodging the authorities, who regard him as a most suspicious fellow indeed!
There are several fight scenes and some occurrences in a big box store, and a scene where Jack Reacher catches a baseball bat to the noggin! Ha ha! There’s a car chase that never really gets going, and some scenes in which we find out how nasty Werner Herzog’s character, who bit off his fingers in a Siberian work camp or something, really is! Eventually it all comes down to a corporate conspiracy – a point in the movie’s favour, ha ha! – and a shootout at the ol’ construction site! There’s a corrupt cop in the mix of course, but there’s also a red herring and a yawner of a double-back sneak!
Herzog does a fine job with his role, and there are a bunch of competent actors surrounding him and the wee Cruise, like David “Rise of the Planet of the Apes” Oyelowo, Richard “Cabin in the Woods” Jenkins, and of course crusty old Robert Duvall as a popgun-lovin’ cuss! The real problem is how generic the picture feels – it seems like something made to be watched on an airplane, and that’s not meant as a complement! On the other hand, as a true believer in the power of the big screen, I recognize that the picture might have had more impact had I seen it on one!
Still, I have to work with what I was given, and the movie, while being big and shiny and expensive and competently made and occasionally mildly suspenseful, has a dispensable, bargain-bin feel to it! I’ve seen better and I’ve seen worse, but Jack Reacher is getting no more than one and a half gnarly hand prostheses from me, ha ha!
Posted by Burl at 20:29