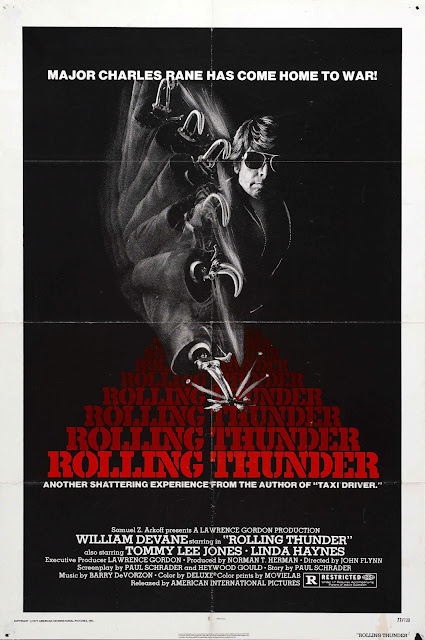 Burl here, presenting a write-up concerning the revenge drama Rolling Thunder! This is a picture beloved by many, and I myself, having seen it before, years ago, remembered it fondly! Five years before John Rambo got himself lost in the B.C. mountains, here is the Vietnam veteran movie that actually drew first blood, ha ha!
William “The Dark” Devane plays Major Charles Rane, who commanded troops in ‘Nam and then ended up a POW for almost ten years! He returns Stateside with his fellow prisoner, a wreck played by Tommy Lee Jones from The Fugitive! Of course everything has changed for The Major: his infant son has grown into a boy, his wife has taken up with another fellow; a cop, a decent enough guy, but one who calls his stepson “runt!” On the upside, The Major attracts the attentions of a local POW groupie (Linda Haynes from Human Experiments) and is gifted, by a local car dealership or chamber of commerce, a golden dollar for every day he was imprisoned! Further on the downside, his cask of gold attracts the attentions of a foul violence gang who kill his family and grind off The Major’s hand in a garbarator!
The leader of this terrible violence gang is none other than James Best, a terrific actor whom we all know from The Killer Shrews and of course, his role as Roscoe P. Coltrane! Q-Q-Q indeed! Luke Askew from The Beast Within is in the gang too, and a couple of other fellows besides! Dabney Coleman from Cloak & Dagger takes on the small role as The Major’s Army shrink, but nothing this braindoctor can say will take away The Major’s thirst for blood vengeance or the silver hook he now sports for a hand! Ha ha! The Major enlists his buddy Tommy Lee Jones to help, and it’s kind of touching: Tommy Lee asks no questions, but simply says “I’ll get my gear!” Of course it’s because he wants to help The Major, but also because he can’t adjust to and just plain hates his Stateside life, ha ha! And one sympathizes with him completely whenever his family is shown!
The picture was directed by John “Best Seller” Flynn, and is probably the movie on which his reputation for no-nonsense action-drama largely is based! Because, ha ha, it’s pretty good! Having a Paul Schrader/Heywood Gould script doesn’t hurt of course, and the photography by Jordan “Blade Runner” Cronenweth is ideal for the picture, and the cast is pretty d*rn strong! The final scenes, which recall those of Taxi Driver in their “man’s gotta do” brutality, are particularly memorable! (Those expecting wall-to-wall blood action will probably consider the picture too much of a drama for their tastes, but that’s their loss! I think when I saw it as a teenager, I was a little underwhelmed, but I feel differently now!)
It’s a simple picture, and from that comes its strength! It actually fits into a microgenre I like: movies that were given the green light on the basis of their exploitable elements, but are actually artistic works of serious purpose! And yet they fulfill their genre requirements nicely! Ha ha, I can’t think of other examples right off the top of my mind, but there are plenty – maybe Cockfighter is another one!
Anyway, it’s a movie of well-oiled craftsmanship, and it delivers the goods! It’s not brilliant, but it’s a very fine low-budgeter, and William Devane going from this to The Dark in less than two years impresses me with his range! I find him an interesting-looking fellow, like the half-simian Kennedy brother they kept in the White House attic! In any event, I’m going to give Rolling Thunder three pairs of mirrored sunglasses!
Posted by Burl at 22:28