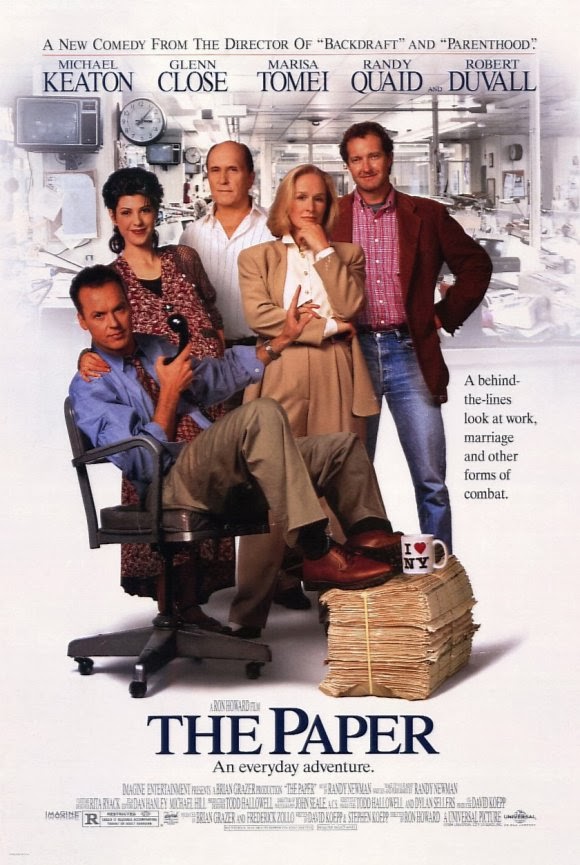 Extry, extry, it’s Burl, here to review a newspaper picture for you! Ha ha, yes, newspaper pictures are another subgenre I’ve always liked, and this one, Ron Howard’s The Paper, might well be the last contemporary broadsheet film that was ever or ever will be made! So that’s why I watched it – though it knew it not at the time, it’s a little piece of history!
It’s got a bit of an ensemble feel to it, ha ha, and also comes off like a workplace sit-com! The main character is Henry, played by well-known funnyman Michael “Gung Ho” Keaton, and he’s the editor of a tabloid paper in New York! Yes, it’s the type of paper that uses words like “straphanger,” “torso” and “slayfest” in the headlines, just the sort David Letterman warned us about! Somehow Glenn Close is working with him, carrying herself like she’s Anna Wintour, and the whole enterprise is bossed by good old Robert Duvall, famed for his role in Jack Reacher!
There’s a bother involving two businessmen murdered in Brooklyn, and the two innocent black kids who are scapegoated for the crime! Henry gets information hinting at their inculpability even as his paper is preparing to crucify the kids in the court of public opinion, ha ha! Then it’s a Race Against Time, as the proof must be confirmed before the true story can be run, and all the while various minidramas are popping like fireworks around the main plot!
The picture’s value lies in its magnificent temporal placement, which locates it as probably the most modern newspaper story that ever will be made! Just a couple of years before the Internet really became a thing, this is a movie where a truck drives past and hurls out a stack of the morning paper to chipper newsboys, like Sweet Smell of Success, or The Speed Reporter for that matter! Ha ha, it’s marvelous! And The Net would come out less than a year later! I found it an altogether wonderful period piece, except for the boring domestic stuff!
There are plenty of ringers and a few dingers in the supporting cast! Randy Quaid from The Wild Life and Christmas Vacation plays the most eccentric of the newspaper staff – he fires a gun in the office and receives only a mild reprimand – and familiar faces like Jack "D.O.A." Kehoe, Lynne “Streets of Fire” Thigpen, Jack “Inside Llewyn Davis” O’Connell, and of course Clint “Ticks” Howard and Howard pére, Rance, known for his bit part in Innerspace! The newspaper is of course owned by Jason Robards, enjoying a promotion from his All The President’s Men days! And Henry’s very pregnant wife is played by Marisa “The Toxic Avenger” Tomei, who in real life, I understand, loves traffic cones!
Ha ha, it got a few accolades on its release, but I found it rather cartoonish! Many of the situations and characters are stock, and it has a real Hollywood feel to it, without the grit of a true-blue newspaper movie, as I reckon them at least! Ha ha, but it’s professionally done, with some good moments sprinkled here and there; but mostly it’s the sort of thing that I suspect would play better today as a salty-tongued TV show! I give The Paper one and a half punchups in the print shop!
Posted by Burl at 23:51